Place yeast and sugar in a large bowl and stir together. Add warm water and mix thoroughly. Allow yeast to activate, about 5 to 10 minutes. Add flour and sea salt and stir with a fork until dough holds together and is smooth and elastic. Cover dough and let rest 30 minutes. On a floured surface, lightly knead dough into a ball and then divide into 24 equal portions. On floured board, roll out into bread sticks. (The shorter the stick, the thicker and chewier the bread sticks will be; the longer the stick, the thinner and crunchier.) Mix butter and both garlics in a large dish. Place breadcrumbs in another large dish or pan. Dip dough sticks into butter mixture and then into the breadcrumbs. Place onto greased cookie sheet 2 to 3 inches apart. Preheat oven to 400 degrees. (This allows about 10 minutes for the bread to begin to rise.) Bake about 15 minutes until inside is cooked through. Makes 24.

Preheat oven as directed on ham package and bake according to directions. Combine remaining ingredients in a small bowl and brush 3/4 of the glaze over ham during the last 30 minutes of baking. When ham is done, remove from oven and brush remaining glaze on top. Loosely cover for foil for 10 minutes before serving.

Heat oven to 425 degrees. Clean the meat, cartilage and fat between the tips of the rib bones (leave a thin layer of fat) and place rack bone-side down on a roasting pan lined with foil. Sprinkle onion around the lamb.

Combine salt, pepper, honey, chile powder and vinegar in a bowl. Baste lamb with about half of this glaze and reserve the rest. Place roasting pan on oven center rack and bake about 25 minutes (for medium rare) or until desired doneness. Baste with glaze from the pan about every 5 minutes. When lamb is done, let rest 5 minutes. While resting, combine orange juice, garlic and reserved glaze in a small saucepan and simmer over medium-high heat until reduced to a slightly syrupy glaze. Cut rack into chops and coat individually with glaze. Place lemon slices on plates and arrange chops on top. Garnish with fresh herbs. Serves 4. 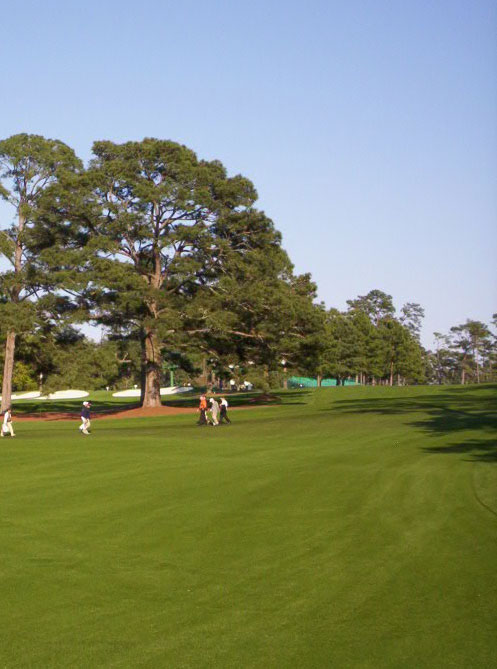 Score a Cold War victory for President Eisenhower. Augusta National Golf Club’s Eisenhower Tree, a loblolly pine that the former U.S. president, World War II general and Augusta National member once lobbied to have removed, no longer stands sentry on the 17th hole. Ike’s namesake tree was brought down – fittingly enough – on Presidents Day Weekend this year after it lost most of its major branches and suffered irreparable damage during a February ice storm.

The pine, which was about 65 feet high and about 100 to 125 years old, occupied the left center of the fairway about 210 yards from the Masters tee. Players had to hit over the tree to keep the ball in the fairway, or try to shape the ball from right-to-left to avoid it.

“The loss of the Eisenhower Tree is difficult news to accept. We obtained opinions from the best arborists available and, unfortunately, were advised that no recovery was possible,” says Billy Payne, chairman of Augusta National and the Masters Tournament. “We have begun deliberations of the best way to address the future of the 17th hole and to pay tribute to this iconic symbol of our history. Rest assured, we will do both appropriately.”

Eisenhower hit into the tree so often that, during a Club governors meeting in 1956, he campaigned to have it cut down. Clifford Roberts, Augusta National co-founder and chairman at the time, promptly ruled him out of order and adjourned the meeting. The pine was linked to Eisenhower ever since. 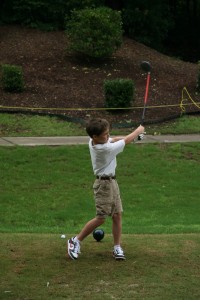 The inaugural Drive, Chip & Putt Championship is one of the latest initiatives to attract the next generation to golf.

Every young golfer dreams of sinking a winning putt on the 18th hole of Augusta National Golf Club to win the Masters Tournament. Well, this year 88 boys and girls ages 7 to 15 will have the chance to make that dream-come-true putt at the inaugural Drive, Chip & Putt Championship.

The finals of the nationwide junior skills competition, which was announced at last year’s Masters, will take place Sunday, April 6 – the Sunday before the tournament begins – at Augusta National. The drive and chip finals will be held at the practice facility. The putting competition will recreate some of the famous putts that have won the Masters on Augusta National’s 18th green. 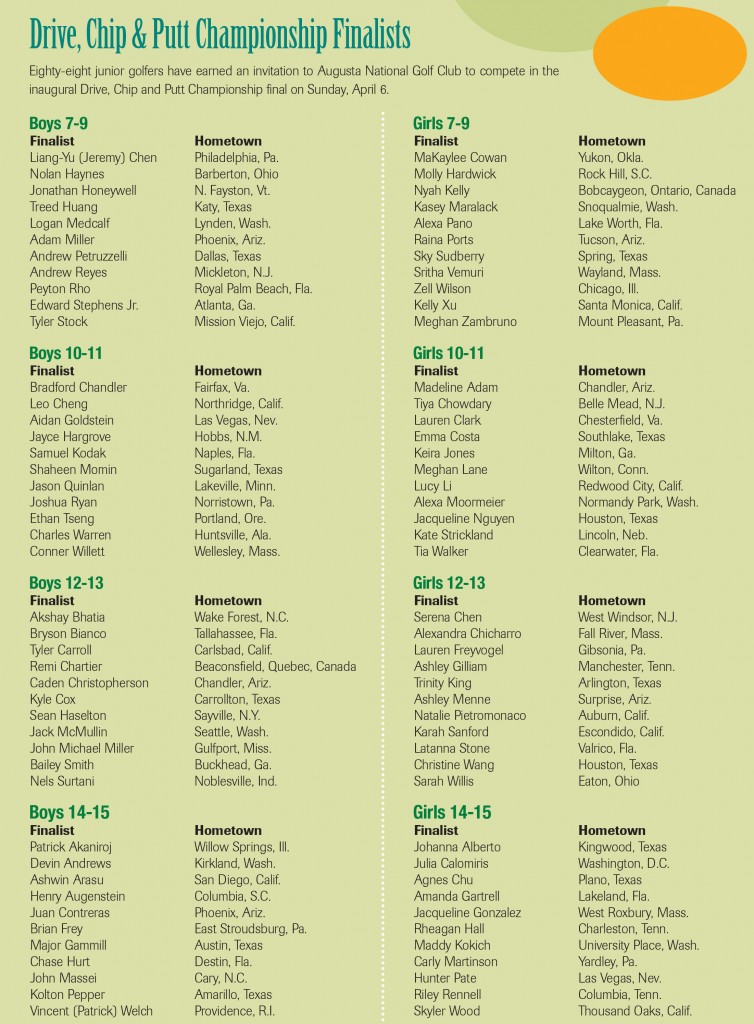 See the full list of Finalists who will be competing in the inaugural Drive, Chip and Putt Championship final on Sunday, April 6 at Augusta National Golf Club.

“We thought about what would be thrilling and exciting, and we couldn’t help but think, historically, how many of the great golfers, professionals of the world, have visualized making the winning putt on the 18th green to secure their Masters title,” says Billy Payne, chairman of Augusta National and the Masters Foundation. “So we thought if we could duplicate that, share it with these kids, it would be both thrilling for them and amazing to watch.”

The Masters Tournament Foundation, a charitable arm of the tournament that invests in golf development programs, is sponsoring the event along with the United States Golf Association and the PGA of America.

“Our collective efforts to promote amateur golf are as critical today as they have ever been in the past. Our game is facing real challenges here in the United States concerning its health, and Drive, Chip and Putt is just one way that we can attract and grow a new generation of players to the game,” says Glen Nager, USGA president. 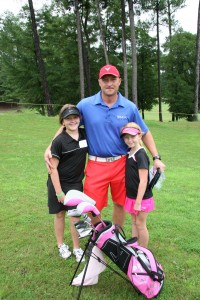 The top two overall point earners in each of the boys and girls divisions in the local qualifiers advanced to one of 11 regional qualifiers in August. The top finisher in the age/gender categories at each site earned a spot in the final, which will be broadcast live on the Golf Channel.

“The ability to successfully drive, chip and putt a golf ball are some of the basics to the enjoyment of the sport, and we believe this competition will motivate young players to work hard, practice these principle skills and learn to make golf a game of a lifetime,” says Ted Bishop, the PGA of America president. 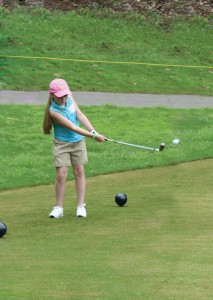 Two local qualifiers were held at The First Tee of Augusta in July, and a total of 320 children from multiple states participated in the morning and afternoon sessions.

“We were one of the few locations that had two qualifiers. Some kids in Augusta had to go elsewhere to compete,” says Jill Brown, The First Tee’s executive director.

However, there was plenty of local talent on display. Laine Showman, 11, of Augusta decided to enter the contest because her golf teacher thought it would be a good experience for her. Laine admitted that she was nervous, but her putting quickly calmed her down. “On the first one, I got it in,” she says.

Another competitor, 11-year-old Chancellor Huggins of Augusta, started playing golf when he was 2 years old. “My dad had clubs around the house, and I just start swinging them,” he says. Chancellor started playing competitively about two years ago after he attended the Masters with a group of youths.

Eleven-year-old Palmer Mason, the son of a golf pro, came to the qualifier from Irmo, South Carolina. “My dad found out about it and asked me if I want to enter,” he says. “I said ‘yes’ because I wanted to try to have a chance to play at Augusta National.”

Martinez resident Kailey Burack had been playing golf for about a year before she entered the contest. “I wanted to see how good I was, and it seemed fun,” she says. “I just like trying to hit the ball as far as I can.”

Kailey finished in second place in the girls division for 10- and 11-year-olds to advance to the regional qualifier at Atlanta Athletic Club in Duluth, Georgia. However, her father, Serge, said his top priority was for her to have a good time. “I can see her dimples so she’s smiling,” he said. “This is great for the kids. It’s a great concept.”

In another effort to attract new players to the game of golf, the Masters Tournament, the R&A and the United States Golf Association announced the formation of the Latin America Amateur Championship in January. This new amateur golf event is aimed at stimulating growth and inspiring greater interest in the game throughout South America, Central America, Mexico and the Caribbean.

“We believe this event will be motivating to current and future generations of golfers and, one day, create heroes that will inspire others to give the game a try,” says Billy Payne, chairman of Augusta National Golf Club and the Masters. “This belief has guided us well through the early successes of the Asia-Pacific Amateur Championship and, with the collective expertise in guiding the game of golf provided by the R&A and the USGA, we are hopeful in achieving equally exciting results.”

The inaugural competition will take place January 15-18, 2015, at Pilar Golf, a course that opened in 1992 near Buenos Aires, Argentina. The course has been the site of national championships, including the Argentina Open in 2006 and 2011. The 120-player field will be comprised of the top male amateurs in Latin America. 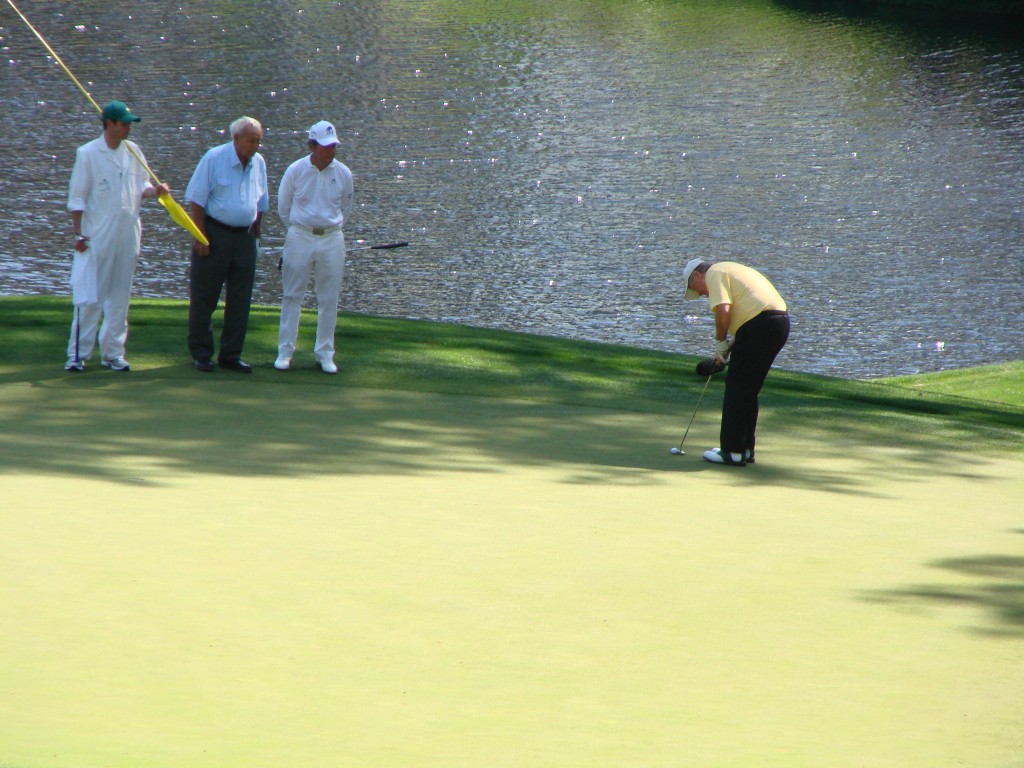 Six-time Masters Tournament champion Jack Nicklaus won his first green jacket in 1963 in his fifth tournament appearance, but it took him 35 years to get a coat of his own.

After the 23-year-old Nicklaus, who came to the 1963 Masters as the reigning U.S. Open champion, won the tournament with a score of 2-under-par, defending champion Arnold Palmer awarded him the green jacket.

“Arnold put a green jacket on me, and it was a size 46 long. I could have used it as an overcoat. I was a 43 regular,” said Nicklaus.

When he returned to the Masters the following year, however, he still did not have a coat. Instead, he was given a 43 regular green jacket, which belonged to former New York governor Tom Dewey, to wear.

“The coat fit me perfect, and I wore that for about 10 years,” Nicklaus said. “So they kept putting Tom Dewey’s coat on me every time I won the Masters.”

That oversight finally changed after the 1998 dedication ceremony for the Jack Nicklaus plaque on the water fountain between Nos. 16 and 17. Nicklaus told the green jacket story to Jack Stephens, the Augusta National Golf Club chairman at the time.

“And he said, ‘What?’” Nicklaus recalled.

The next time he came to Augusta National, however, Nicklaus found a note in his locker that told him to go to the pro shop and get his green jacket.

“So now I have a green jacket. Same one,” he said. 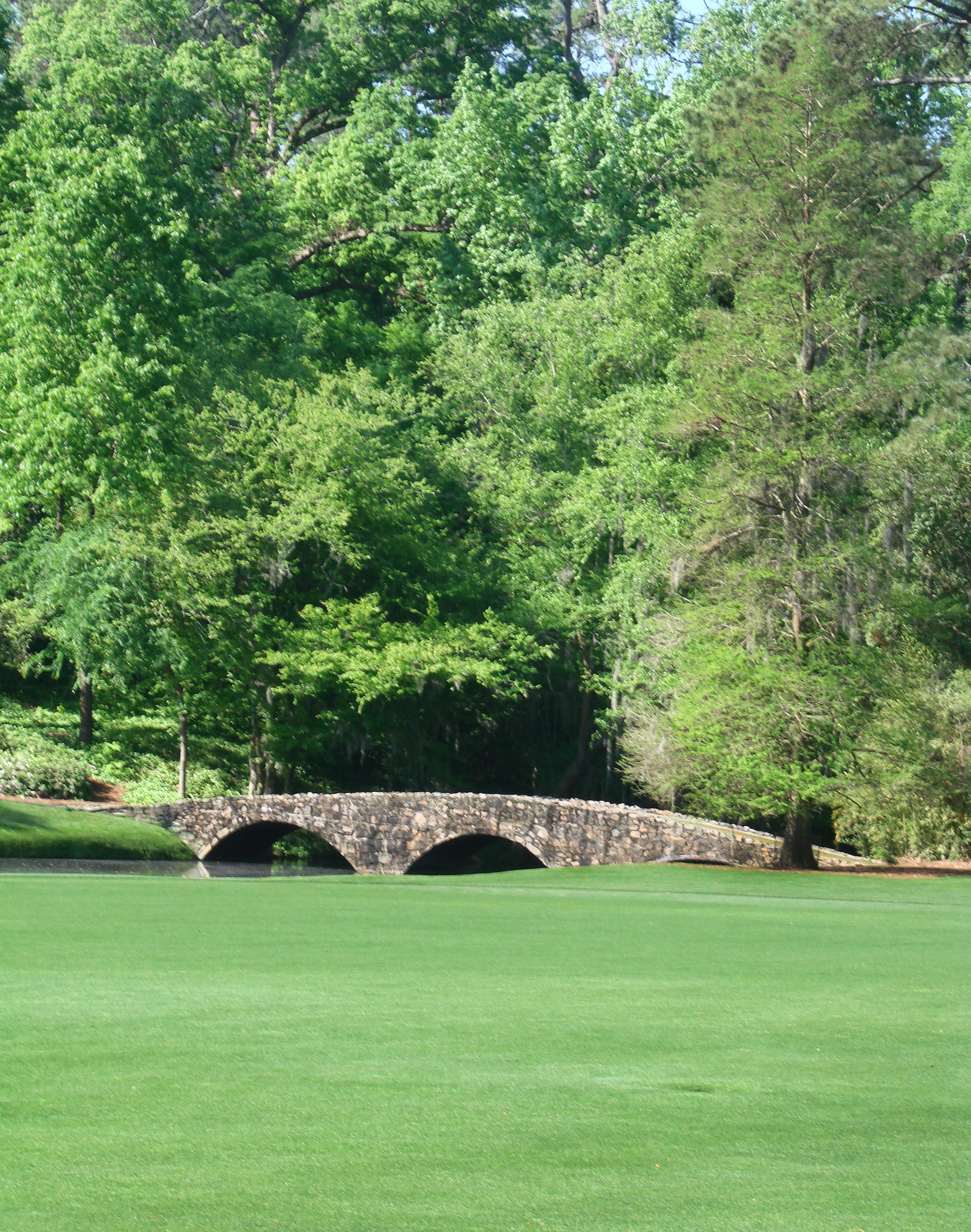 Hogan Bridge at No. 12 Green
Nelson Bridge at No. 13 Tee
Sarazen Bridge at No. 15 Green
Arnold Palmer Plaque behind No. 16 tee
Jack Nicklaus Plaque between Nos. 16 and 17
Record Fountain to the left of No. 17 green
Rae’s Creek between the 11th and 12th greens
Augusta National Golf Club cabins
Ike’s Pond – a spring-fed, 3-acre pond on the Par-3 Course behind Eisenhower Cabin
Par 3 Fountain – adjacent to No. 1 tee on Par 3 course; includes list of Par 3 Contest winners

Junior Passes
Children of all ages must have a ticket to enter the grounds. On tournament days only, a child between the ages of 8 and 16, accompanied by the patron of record (whose name appears on the patron list), may obtain a complimentary ticket for the day. Junior passes are limited to one child per day for the patron of record only.

Inclement Weather
In the event of inclement weather, patrons should watch all scoreboards/message boards for Weather Warning signs. When the sign appears, patrons should take precautions even before play is suspended. The sounding of an air horn will signal suspension of play. Patrons are advised to seek shelter immediately upon the sounding of the alert.