Even in the sunny South, gardens grow brown and shriveled this time of year, leaving green thumbs frustrated and forlorn. But the new Atlanta Botanical Garden Flower Show — a revival of the Southeastern Flower Show — may be just the antidote to winter doldrums.

In its heyday, the exhibition, which ended in 2013, had blossomed into the premier gardening and horticultural event in the Southeast and once ranked among the top three flower shows in the country.

“We’re not attempting to be a huge flower show like those in the past,” says Danny Flanders, public relations manager for Atlanta Botanical Garden. “We want to start small and see where it goes.”

Showcasing Talent
Flanders says visitors to the Botanical Garden, which always had been involved in the flower show, frequently asked about renewing the exhibition during the past several years. “Every major city has a flower show,” he says. “It was time to bring one back.”

This year’s theme is Ingenue: A Toast to Georgia’s Film Industry, and the exhibit will center around juried competition in floral design, horticulture and photography.

The floral design category will showcase the art of flower arranging, and competitions will vie for honors in classes including drama, science fiction, comedy/tragedy, horror, romantic comedy and animation. In addition, entrants can compete in the leading lady class in which they must create a dress design arrangement inspired by a famous actress.

Competitors will try to propagate the most perfect example of a given species in the horticulture division, and they must include a growing thing in images entered in the photography contest. In addition, visitors can view small garden displays in the landscape design division, which will be created by Boxwoods, Ed Castro Landscape, Hamilton Land Services and Unique Environmental.

Experts and Inspiration
Saturday speakers will feature floral designers Bruno Duarte and James Farmer. The lectures will be held from 2 p.m. – 5 p.m. at Piedmont Driving Club, and tickets are $50.

Duarte grew up surrounded by flowers on his family’s farm in Madeira, an island paradise off the coast of Morocco that is known as the floating garden and is home to rare species of flowers from around the world. With a sculptural and an emotional approach to floral design, he blends organic materials and found objects together to create works of art.

His floral studio in Toronto is often mistaken for an art gallery, where weekly window displays are created to showcase his artistry. When Duarte is not at his studio, he can be found designing in front of a live audience. He frequently appears on local and national television programs, and gives floral demonstrations at Home and Garden shows. He is also a regular contributor to magazines in Australia, Canada and the United States.

Farmer is the author of the Wall Street Journal best-selling garden book, A Time To Plant; Sip & Savor; Porch Living; Wreaths For All Seasons; A Time To Cook, Dinner on the Grounds, A Time to Celebrate and A Place to Call Home. Born and bred in the South, Farmer is a professional garden, floral and interior designer, cook, author and lifestyle expert. He also is editor-at-large for Southern Living and a frequent guest on television and radio programs.

One of the best parts of the show will be seeing what a clever mind can do when given an idea and told to run with it. Past themes like Myth, Fable and Fantasy; At the Movies; Salute to the Century; The Artist’s Eye and Rhythm in Bloom have inspired countless whimsical and ingenious creations.

Imagine designing a garden around an abandoned pickup truck, as one landscape design firm did for Laughter in the Garden, or recreating a scene from Agatha Christie’s 4:50 from Paddington, in which a woman witnesses a murder from her train car, with just flowers, as one floral designer did for Gardens of Poetry and Prose.

It may not be quite the same as strolling amongst the glitz and glamour of a movie set. However, you’ll no doubt come away from the event impressed by the creativity and ready to look at your outdoor spaces in a fresh, cinematic way.

“In the wintertime, everybody gets starved for flowers and plants,” says Flanders. “We hope the show will inspire people to use some of the ideas in their own gardens.”

Even if you can’t get tickets to the Masters Tournament in April, you can get tickets to Taste of the Master Chefs on Friday, April 6 — while they last, that is. That’s where you can experience award-winning cuisine and rub elbows with captains of industry, athletics and entertainment.

The fundraising event was started last year by Laurie Merrill, CEO of Taste of the Master Chefs, and Wayne Kostroski, Taste of the NFL founder and 2010 James Beard Humanitarian of the Year.

“There are a lot of elite private corporate events during Masters Week,” says Merrill. “We wanted to create an evening event for local people, corporate and elite celebrities, amazing chefs and professional athletes to come together at one venue.”

Taste of the Master Chefs will feature cuisine prepared by 15 to 18 James Beard Award-winning chefs from around the country, along with live musical entertainment. Like last year, José Andrés, one of Time magazine’s “100 Most Influential People” and 2011 James Beard Foundation Outstanding Chef, will serve as chef chair for the event. The party is designed to raise funds and awareness for hunger relief, and all proceeds will benefit food programs at Salvation Army of Augusta.

“It’s a phenomenal team effort involving a vast group of people who believe in the same cause,” Merrill says. “It’s a great vehicle for all of the people who are coming to the Masters to enjoy the beauty of the Masters and the beauty of Augusta in the spring. We also want local people to be there and enjoy it. It’s a one-of-a-kind event that has just enough exclusivity to it.”

A limited number of tickets are available. Athletes who attended last year’s event include Sergio Garcia, who went on to win the 2017 Masters, and Real Madrid soccer legend Luis Figo.

“Come and enjoy the amazing party,” says Merrill. “There isn’t anything else you’ll do all year long in Augusta that will come close to Taste of the Master Chefs.”

What: Taste of the Master Chefs

Preheat oven to 375 degrees. Cook lasagna noodles according to package directions. Once cooked, lay in a single layer on waxed paper. In a skillet over medium heat, brown ground beef and season with salt and pepper. Add onion and garlic and cook until onions soften, about 5-8 min. Add spaghetti sauce, tomato sauce, oregano and basil. Lower heat to med-low and cook about 15 minutes.

In a medium bowl, combine the ricotta cheese with half of the mozzarella and Parmesan cheeses. Add egg, parsley, salt and pepper; mix until combined. Layer a 9×13 baking pan with 1 cup of meat sauce to cover bottom of pan. Spoon about 1/4 cup of cheese mixture down each noodle. Top with 1/4 cup meat sauce. Roll up lasagna noodles and place seam-side down in the pan. Top with remaining meat sauce and cheeses. Cover with aluminum foil and bake about 30 minutes. Uncover and bake 12-15 more minutes until lightly browned and cheese is bubbly. Let stand for 10 minutes before serving. Makes 12 rolls. 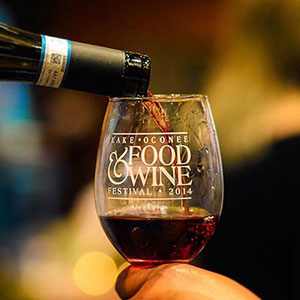 Any day is a good day to enjoy good food and fine wine. For three days in March, however, connoisseurs can enjoy both at the ninth annual Lake Oconee Food & Wine Festival.

The festival will feature more than 200 out-of-this-world wines from vintners across the planet as well as international liquors. Highlighting the region’s most creative chefs and culinary talent, the event will feature an eclectic mix of performers and visual artists as well.

In addition to tastings, other activities include a silent auction, the Linger Longer Launch Party, Brew and Que cook-off, What’s the Right Glass? class, Jazz Brunch, a Masserati Ride & Drive and, of course, the Grand Tasting.

New events this year include the Go Wild! Game and Beer Dinner and Festival Cigar Lounge (no tickets required for this event). Festivalgoers can pick and choose the activities they would like to attend. 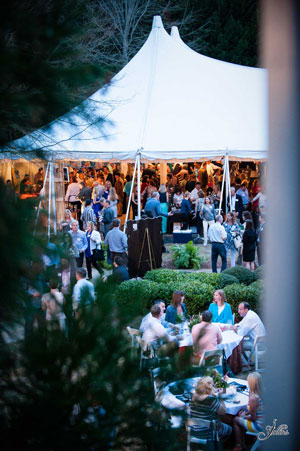 What to Do
At the launch party, wine, beer and specialty cocktails will be available while people dance the night away to the music of country singer and Lake Oconee native Eric Dodd. The launch party tickets also include admission to the game and beer dinner, where guests can enjoy a five-course dinner featuring wild game selections paired with craft beer by Sierra Nevada.

If you have ever wondered which glass to use for which wine, wonder no more. Matt Garafalo of Oconee Cellars in Greensboro and Riedel Ambassadors will give a live demonstration on the effects that the shape of a wine glass has on each varietal.

In addition, they will explain how stemware delivers the bouquet, taste, balance and finish of a wine. Attendees will be able to sample wines from the Wagner family, the owners of Caymus Vineyard, and wines from Silver Oaks, the featured vintner at this year’s festival. Tickets also include a set of four Riedel Veritas wine glasses.

As the centerpiece of the festival, the lakeside Grand Tasting will feature food from local and regional chefs paired with wines from around the world as well as local brews and spirits. A silent auction will offer items such as destination vacations, gourmet dinners and sporting packages. Thomas Arvid will demonstrate live painting at the Grand Tasting.

Who to See
To ensure that no one goes hungry at the Food & Wine Festival, the featured chefs will offer a wide variety of offerings at the Brew & Que and the Grand Tasting.

At the Brew & Que, festivalgoers can enjoy the talents of Griffin Buffkin of Southern Soul Barbecue on St. Simons Island, Alex Davidson of Georgia Butts BBQ on Lake Oconee, Eric Thomas, pitmaster of The Rolling Grill in Atlanta and Eric Wisham of Wisham Kellies in Tifton.

The Grand Tasting will feature the culinary craftsmanship of an additional slate of chefs. The lineup includes Reva Alexander of Merci Beaucoup Cakes, Teri Blevins of Lil’ Bit of Heaven Cupcakes, Corrado Corrias of Da Corrado Ristorante in Greensboro, Scott Debernardo of The Pine Food & Drink in Athens, Joy and James Kuper of Sweet Kneads Bakery and Café in Eatonton, the Last Resort Grill in Athens, Edward Mendoza of Cucina 503 in Augusta and Derin Moore, executive chef at Reynolds Lake Oconee 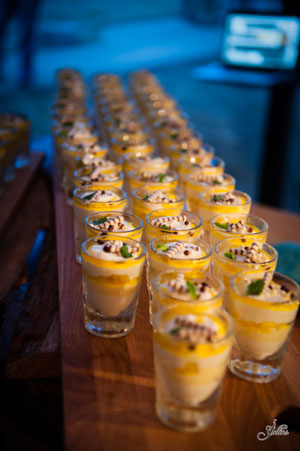