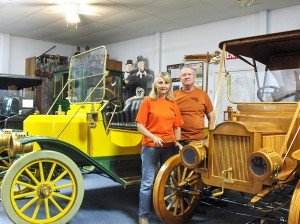 A Harlem man combines his love of woodworking and historic vehicles to create lifelike sculptures of a 19th century locomotive and vintage cars.

People can find all kinds of ways to spend their golden years. Some cultivate a hobby. Others prefer to volunteer. Still others like to keep history alive. Local resident Gary Russeth, a Minnesota native who retired in Harlem in 2005, is into all three. 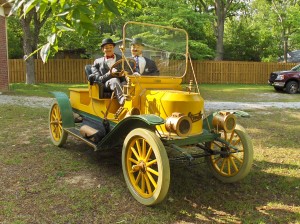 In his spare time, Russeth and his wife, Jean, run their Ollie Also and Stanie Too Fine Mess Old Car Museum of Harlem, Georgia, where he displays his large woodcarving sculptures of a train and vintage automobiles.

“I’ve always been an enthusiast of Laurel and Hardy, and I thought Harlem was a good place to retire,” says Russeth, a former Marine who spent his professional career making life support equipment for helicopters.

He and his wife had visited the community for the annual Laurel and Hardy Festival before retiring here. Now they stay busy with the museum, where his wooden replica of the General, a 4-4-0 steam locomotive built during the 1850s, sits outside. However, Russeth would like to find another home for the train. 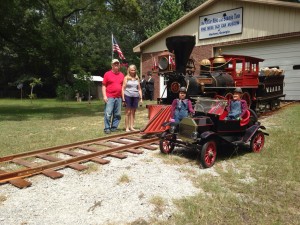 “I’d like to put it on permanent display someplace, and I’d like to keep it close by,” he says.

After all, the project is one that is near and dear to his heart, so he wouldn’t want it to stray too far down the tracks. Russeth completed the half-scale replica, which is 26 feet long and 54 inches wide, in 2016 with recycled pieces of wood after four years of work.

“I’m still futzing around with it. I made smoke and steam coming out of it by using Dacron to make it look more authentic,” he says. 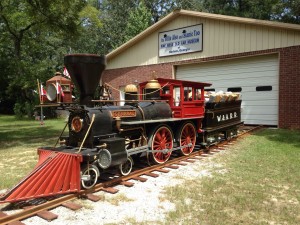 He even built wooden tracks to sit beneath the locomotive. He admits that the real reason he built the train replica, however, was to have a place to put his half-scale marionettes of Stan Laurel and Oliver Hardy.

Russeth says he has made about 50 trains through the years. He also has had a lifelong fascination with automobiles and their art of design, and he started carving model cars when he was 13 years old.

“I have always been interested in wood and making things,” says Russeth. “I want to keep the history of old vehicles alive.” 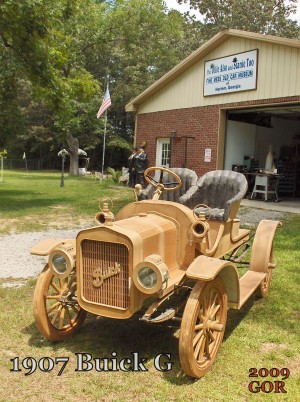 In addition to the General, he has seven wood-carved vintage cars, along with a real Model T Ford, on display at the museum.

The Model T features life-size soft sculptures of Laurel and Hardy, and the 1926 license plate represents the year the comedy duo first teamed up for the film, 45 Minutes from Hollywood.

A realistic crank starts the motor when a dashboard switch is turned on, and an internal electric motor provides the sound of a roaring engine. Head, tail and side lights are illuminated when the motor is running.

The sculpture also features a working, two-man, fold-down top; steering and a realistic-sounding horn. Russeth, who also volunteers at the Laurel & Hardy Museum, considers this sculpture a tribute to Henry, Stan and Ollie.

The museum is located at 415 East Boundary Street in Harlem, and it is open, Russeth says, “whenever we get a call.”

“People who come here are not disappointed,” he says.

The quarterly sale at the Evans library branch is one for the books.

“We’ll have hundreds of books – paperbacks, hardbacks, textbooks, fiction and nonfiction – that have been donated to the library,” says Debbie Burton, president of Friends of the Columbia County Libraries. “If people love books, it’s a great opportunity to pick them up for reasonable prices.”

“The library has a budget from the state, but it doesn’t cover a lot of the extras,” Burton says. “The library is such a great resource, and the book sale lets us do a lot of things for the library and the community.”

Spread cream cheese on one side of the pumpernickel bread. Layer beets, avocado and arugula on 2 slices and top with remaining bread. Slice in half and serve. Makes 2 sandwiches.

*To roast your own beets, preheat oven to 375 degrees. Trim and scrub 4 small beets. Brush lightly with olive oil and wrap in foil. Place on a baking sheet and roast 45 to 60 minutes until cooked through. Let cool about 15 minutes. Peel and slice into 1/4-inch thick rounds.

Pick up some culinary tips at a lavender and herb farm

The lavender season may have come to an end, but things are still cooking at White Hills Farm, a lavender farm in Dearing. Literally.

This month the farm will hold two cooking demonstrations by caterer Charleen Tinley – one on Friday, August 3 and the other on Friday, August 24. The events will begin at 10:30 a.m. with a short tour of the property.

For the August 3 workshop, Charleen will demonstrate wet and dry brining for meat, fish and poultry. On August 24, she will make quick and easy pickled vegetables. And of course, she’ll share samples for everyone to try. The cost for each workshop, which can accommodate about 20 people, is $10. Guests also are welcome to bring a picnic lunch to enjoy on the property after the classes. 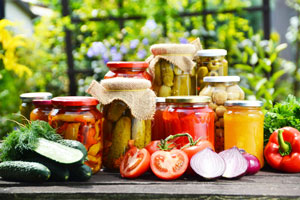 “I love for people to learn to cook in the season using fresh, local foods and incorporate them into their everyday lives,” says Amy Sutter, who purchased White Hills Farm with her husband, Patrick, in April 2017.

If you’re more into R&R than cooking, however, White Hills has that covered as well. On Saturday, August 4 the property will hold an all-day yoga retreat from 9:30 a.m. to 5 p.m. The event will include morning and afternoon yoga sessions, a spa product workshop, a farm tour and a vegetarian lunch. The yoga workshop is $100 per person.

Number of years in position: 1

Family: My husband, Greg Zgol, and I just celebrated our 20th wedding anniversary. We have two boys, Grayson and Ryan. Grayson will be a freshman at Greenbrier High School, and Ryan will be in the 5th grade at SAIL.

Why I’m Passionate About What I Do: School choice is becoming more and more important as we move into a time when our society is conditioned to shop around for the best product for their needs. The time where a traditional school is the only option for families is coming to an end in many states. School choice has been slow to reach our area, but with the increased number of families coming to Greater Augusta from states where school choice is the norm, the demand has increased. I love taking families on a tour of our school and sharing the productions and performances of our scholars. SAIL is not a school that appeals to all children. If a child does not have an interest in the arts, then SAIL is probably not the best choice. That is what is so wonderful about school choice.

Community Groups and Charities I Love to Support: My youngest son, Ryan, became very sick five days after birth, and was admitted to the Children’s Hospital for almost a month. During that time, The Ronald McDonald House made daily visits to us in the hospital and offered us a place to stay while Ryan was being treated. It is important to me to continue to support The Ronald McDonald House so other families will have the same care that was offered to us.

Biggest Career or Life Obstacle I’ve Overcome and How: In 2014, after nearly four years of pulmonary illnesses, I was told that there was a carcinoid tumor blocking my right lung from blood and air flow. At that time I took medical leave from work to improve the quality of my lungs so the tumor could be removed. For 10 days my boys were unable to visit me in the hospital. After the surgery I made a promise to myself that I would never take my health or family for granted.

Accomplishment I’m Most Proud Of: Opening SAIL’s doors to over 400 students in August of 2017 was a proud moment for me. Getting to that moment was the single most challenging experience of my life. Whenever I found myself feeling overwhelmed, I would repeat these words that my oldest son told me: “You’ve got this, Mom!”

What Your Childhood Self Wanted to Be When You Grew Up: As a child I envisioned myself having a career in marine biology. I dreamed of spending my days swimming among the dolphins and rehabilitating beached whales.

Favorite Way to Spend Saturday Afternoon: Sitting on my back porch swing with friends, listening to music and watching the children play in the yard would be the most perfect Saturday afternoon.

Favorite TV Show: My absolute favorite show at this time is “Pool Kings.” My husband says that it was a mistake telling me about this show, but I am hooked.

Favorite Movie: I can watch Remember the Titans over and over and never tire of the plot, characters or theme. I am pretty sure I can recite the whole movie line by line.

Favorite Sports Team: I married a Clemson graduate, so weekend trips to Death Valley are what we enjoy the most in the fall.

Favorite Comfort Food: My grandfather always referred to me as his Georgia Peach. I am pretty sure it was because my favorite dessert growing up was peach cobbler. Today, that is my “go-to” comfort food.

Favorite App: I have just recently downloaded Happify on my smart devices. This app prompts me to focus my energy and thoughts on things that make me happy.

Last Book Read: The most recent book I have read is Fish in a Tree by Lynda Mullaly Hunt. This book is about an academically struggling child who is trying to fit in with her peers. Reading children’s novels helps me stay in touch with the popular topics of my children and scholars.

Dream Vacation: I have always wanted to explore the Great Barrier Reef off the coast of Australia. Snorkeling among the vibrant sea life and experiencing the world’s largest organic structure would be incredible.

Something That Has Changed My Life: Becoming a wife and mom have changed my life in remarkable ways. My husband’s encouragement and support have given me the confidence to take risks and lean into my fears. My children give me reason to always do my best and show grace toward others.

Best Thing I Ever Learned: On the wall just above the chalkboard in my fifth-grade teacher’s classroom read the words, “An easy task is made difficult when done with reluctance.” Life’s mundane tasks can be the hardest to tackle.

One Word You Would Use to Describe Yourself: I would best describe myself as determined. I fully believe if there’s a will, there’s a way.

Favorite Hobbies: Gardening is probably my favorite thing to do in my leisure time. My mother gave me the gift of a green thumb, and I love getting my hands in the dirt.

Secret Aspiration: I have always wanted to take Salsa and ballroom dance lessons.

Reality Show I Would Totally Win: Of all the reality shows, I would want to win “Dancing with the Stars,” but I am afraid it would classify more as a comedy.

Something People Would Be Surprised to Know About Me: I am a roller coaster enthusiast. My youngest son, Ryan, and I love the loops, hills, dips and turns of the wildest rides. I would love to be able to take a tour of the world’s fastest and most thrilling roller coasters.