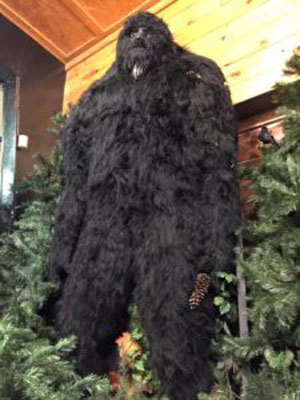 Whether you’re curious, skeptical or you truly believe, a roadside Georgia museum devoted to Bigfoot offers plenty of thought-provoking material about the mythical – or not – creature.

It doesn’t matter what you call him – Sasquatch, Bigfoot, the Abominable Snowman, Yeti. What really matters is whether or not you believe.

For believers, skeptics or those in the know, Expedition Bigfoot! The Sasquatch Museum in Blue Ridge, Georgia is dedicated to research and information about the legendary creature.

David Bakara, a longtime member of the Bigfoot Field Researchers Organization and a U.S. Navy veteran, opened the museum in 2016. The south Florida native grew up hearing stories about the swamp skunk ape – a nearly 7-foot-tall hairy beast that roams the Everglades.

“I just saw normal animals like bears, elk and deer,” says Bakara. “But as I got older, that interest grew up with me.” 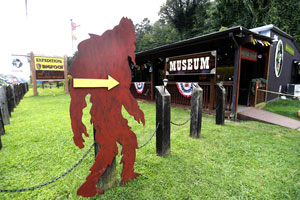 A pushover for vintage Florida roadside attractions and for Disney World, Bakara opened the museum in 2016 a couple of years after he and his wife moved to Blue Ridge. He thought people needed something else to do in the quiet mountain retreat.

“My wife was nervous about people that would come in the museum and try to argue with us about Bigfoot,” Bakara says. “In the five years we’ve been open, we’ve had maybe three encounters with hardcore skeptics. The vast majority of people that come here are open to the possibility that Bigfoot exists, or they already believe. By the time people leave here, they’re seriously asking themselves if this is real.”

He says the museum operates under a scientific approach, but he considers it a family attraction. Visitors come from all across the world, and Bakara says 40,000 to 45,000 people toured the 3,700-square-foot museum in 2020. It’s a space that packs a lot of punch, and there certainly is plenty for people to see. 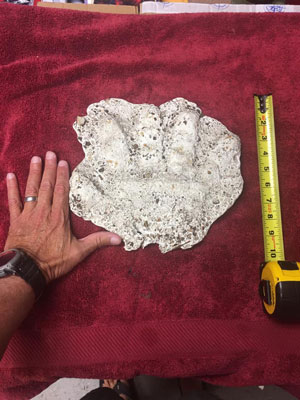 The museum features life-size and interactive exhibits, witness sketches, artifacts from Georgia and other states, signs of Bigfoot such as broken trees and damaged structures, the country’s largest permanent display of footprint casts that includes 20-plus prints from all across the globe, hair samples and gear from expeditions to the Himalayas led by Yeti researcher Tom Slick in the 1950s.

Yes, even a print of Bigfoot’s hind end and feces that were found between footprints in Washington state are on display as well. Bakara says these exhibits particularly appeal to children because “kids love bathroom humor.”

The museum also houses the world’s only research and tech vehicle, which is armed with surveillance equipment such as thermal recorders, walkie-talkies, on-board computers, a two-way radio and a drone pod. 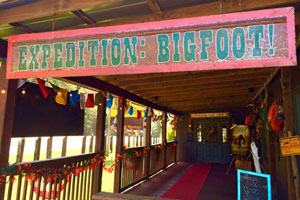 In the Sasquatch Theater, visitors can watch a two-minute cartoon short about a Native American Bigfoot story or the 17-minute documentary, Wild Man of Kentucky.

“People can put on headphones and listen to Bigfoots talking to each other,” says Bakara. “They can hear different howls that have been recorded.”

The attraction also has a display of Bigfoot attacking a remote cabin and a reproduction of a hairy, 8-foot-tall beast. Color-coded maps document hundreds of reported sightings. A 1967 video of an alleged Sasquatch sighting plays on a loop, along with tales from people who claim to have encountered Bigfoot.

“My favorite kind of research is recording the stories of witnesses from all over the United States,” says Bakara. “Every story is a little different.”

Museum tours are self-guided, and depending on their level of interest in Bigfoot and Bigfoot research, visitors spend an average of 45 minutes to an hour going through the facility. 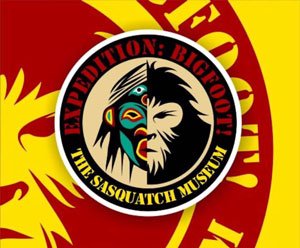 Bakara says many adults who visit the museum remember seeing Sasquatch as a child.

“They’re trying to reach out to kids to let them know at a young age that they don’t have to be afraid of them, so they can take that experience with them as adults,” he says of the creatures.

Believer to Knower
Even though Bakara never encountered Sasquatch when he was a child, he became a Florida Bigfoot investigator. Too many trusted people such as police officers, military personnel and national park rangers had seen Bigfoot for Bakara to doubt the beast’s existence.

“The reality of Bigfoot negates so much of what I was taught in school,” he says. “I was a big history and science fan, but Bigfoot is a stark contrast to them. What is it? Is it real? It raises questions about history. Or are they not real, and everything I was taught is true?”

As an investigator, Bakara gets calls from people who have seen the giant creatures on their property, peering through their windows or stealing their goats. These days, though, he tries to talk people through their encounters or dispatch local investigators rather than visiting the site himself.

“They frighten people,” says Bakara. “When people’s kids see them, they want answers. The goal is to make them move on and stop scaring people.”

He has been on public and private Bigfoot expeditions, which include 25 to 35 people.

“I didn’t see anything personally,” he says. “But on every expedition I’ve been on, somebody has seen one.”

In 2010, however, his status morphed from believer to knower, courtesy of a personal experience. Asked to investigate a Bigfoot sighting on a man’s property in Alva, Florida, he and his team saw the outlines of two Yeti creatures with a thermal imager.

“They were 7 or 8 feet tall. One was taller than the other. They were standing next to each other in complete darkness in the swamp where no one could go,” says Bakara. “We examined them for about 12 minutes. They watched us watch them.”

In 2012, he saw Sasquatch footprints behind him in the Florida panhandle. “I’ve had them push trees down at me in north Florida in 2013,” he says.

Bakara says Bigfoot has been seen on every continent, and the fabled creature is known by other names around the world. In Australia, it is known as Yowie. In the Himalayas, they call it Yeti. In Russia, it goes by Alma. In China, it is referred to as Yeren.

According to Bakara, Sasquatch has been spotted in all types of areas except for big cities. “But if there are greenways that run through small cities, people see them there at night,” he says.

However, he says most sightings occur in the daytime for a simple reason — it’s easier to see in the daylight. “I don’t think they’re more active during the day,” says Bakara.

Sasquatch comes in all kinds of colors and body shapes, he says. People have seen whole families of the beasts together, and footprints have different characteristics. He says 3,500 to 10,000 Bigfoots have been spotted in North America alone.

“They have an overwhelming curiosity about us, especially if there are children in the house,” says Bakara.

If he had the chance to talk to one of the creatures, though, the Bigfoot investigator says he would take a pass. “I wouldn’t say anything,” he says. “I would let it do the talking because what am I going to tell it?”

However, he adds, people who have talked to Bigfoots say the beasts are “interested in what we’re doing to the planet.”

Bakara wants to spark museum visitors’ interest in Bigfoot and encourage them to question what they think they know. Offering eyewitness testimony and evidence, the museum leaves the question of Bigfoot’s existence up to each individual.

“Maybe there’s more to this world than the things they taught us in school,” he says. “I want them to look at evidence and ask hard questions about what’s in our world. Bigfoot is the perfect example that there is still mystery and magic in the world. There are still things that happen that we have no control over, and some of it is good.”

He hopes the Sasquatch Museum spurs conversation and debate as well.

“This really is a family attraction,” says Bakara. “There’s so much to see and hear. It gives the whole family something to talk about on the way home.”

Share Your Sightings
Bigfoot Expedition! The Sasquatch Museum also is a research and reporting center. People who have had an encounter with Bigfoot can share it by emailing the museum at expeditionbigfootblueridge@gmail.com or by calling (706) 946-2601. They are asked to leave their contact information, but it will remain confidential. Names and locations will not be shared without witnesses’ permission.