Looking for a fall road trip to salute the troops? Georgia has plenty of military-related attractions in its arsenal.

Rich in history and home to Fort Gordon, this area offers any number of ways to honor veterans – this month or any time. However, if you’d rather hit the road for a military-infused daytrip or a weekend excursion, you’re in luck. The Georgia World War II Heritage Trail, which launched earlier this year, and other destinations in statewide travel regions offer insight into a soldier’s life and Georgia’s military history.

The Heritage Trail (georgiawwiitrail.org) is one of only four World War II trails in the country. The South was crucial to the World War II effort, and 10 trail sites across the state (designated below with an *) have partnered to share the experiences of the 300,000 Georgians who served in the war along with the thousands of civilians who worked in the state’s defense industries.

The sites document all of the harsh realities that Georgians serving abroad experienced, from homesickness and combat to capture by the enemy.

For more information, hours of operation or covid-19 restrictions, please visit the attraction websites before planning a visit. 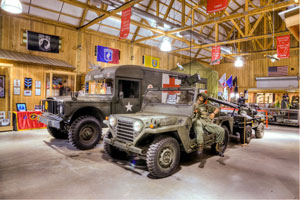 U.S. Army Signal Corps Museum, Fort Gordon
Calling all history buffs. If you’re into rare wartime memorabilia, then dial up a visit to the U.S. Army Signal Corps Museum at Fort Gordon. Artifacts from friend and foe alike range from the doomsday red phone at the Pentagon to captured phones from Hitler’s personal library and the Japanese Imperial Army Headquarters in Tokyo.

Other displays feature the stuffed carcass of Liles Boy, the hero carrier pigeon endurance champion of World War II, and an exhibit devoted to the Signal Corps space program. (In 1958 a satellite with a tape recorder was sent into orbit so that President Eisenhower could beam Christmas greetings from space.) Another display case even contains Academy Awards, which the Signal Corps won in the 1940s for several of its documentaries. 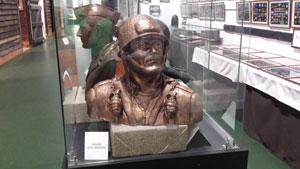 Northeast Georgia Mountains
*Currahee Military Museum, Toccoa
Located in historic downtown Toccoa’s restored train depot, this museum focuses on the Paratrooper Infantry Regiment that trained at Camp Toccoa in the early 1940s. In July 1942, 5,000 men arrived at the remote camp for training as a new type of soldier – the paratrooper.

Over the next few years, 17,000 “Toccoa Men” from the 501st, 506th, 511th and 517th Parachute Infantry Divisions; the 295th Ordnance Heavy Maintenance Company and the 38th Signal Construction Battalion trained at the camp.

The men of E Company, 2nd Battalion, 506th Parachute Infantry Regiment of the 101st Airborne Division – aka the “Screaming Eagles” – were immortalized in the 2001 HBO miniseries, “Band of Brothers,” based on a book of the same name by Stephen E. Ambros. This experimental airborne regiment, activated at Camp Toccoa in 1942, was created to jump from C-47 transport airplanes into hostile territory. Exploits of these paratroopers included parachuting into France on D-Day, fighting in the Battle of the Bulge and liberating a Nazi concentration camp. Free – $10.

Walk of Memories, Alpharetta
Through a walkway of almost 8,000 bricks, Walk of Memories, located at American Legion Post 201, pays tribute to all Georgians who died while serving in the military. The only attraction of its kind in Georgia, this memorial represents conflicts from the Indian War to World War I to Iraq and Afghanistan. Monuments spotlight various conflicts, including World War II, Korea and 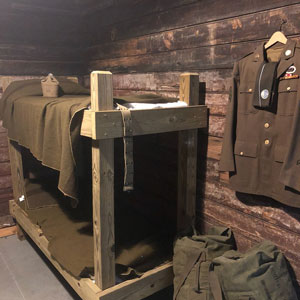 Heritage Park Veterans Museum, McDonough
This museum describes the life of a soldier through military artifacts and vehicles from World War I to the present. Displays inside the red barn structure include uniforms, rations, equipment and supplies. A diorama depicts a realistic scene, and the museum is staffed by combat veteran volunteers. The nearby, 80-foot-long granite Veterans Wall of Honor depicts battle scenes and famous quotations that honor the bravery and sacrifices of U.S. veterans. Free; donations accepted.

Historic High Country
Chickamauga & Chattanooga National Military Park, Fort Oglethorpe
This park was the first major Civil War battlefield set aside as a memorial to the soldiers who fought there. Congress authorized the purchase of 5,200 acres of land in northwest Georgia in 1892, and the park was dedicated in 1895 by veterans from the North and South.

The Visitors Center offers interpretive exhibits and a multi-media program that gives detailed information about the battle. A display illustrates the types of light field artillery used during the Chickamauga and Chattanooga campaign. The battlefield also contains hundreds of monuments, interpretative tablets, wayside exhibits, and hiking and biking trails.

Visitors can take a self-guided tour of the battlefield during daylight hours and hear an audio tape recount the three-day conflict that claimed 34,000 Union and Confederate casualties. Free – $10.

6th Cavalry Museum, Fort Oglethorpe
The museum preserves the military history of the Fighting 6th Cavalry, stationed at The Post at Fort Oglethorpe 1919 – 1942. The cavalry’s illustrious story begins in 1861 as a U.S. Cavalry Regiment, and the area, surrounded by officer’s homes and other Post buildings, is listed on the National Register of Historic Places. Exhibits include uniforms, weapons, accouterments, maps, photos, an authentic M-47 Patton tank, a World War II Jeep, a World War II troop transport truck and memorabilia of the 6th Cavalry. Free – $5. 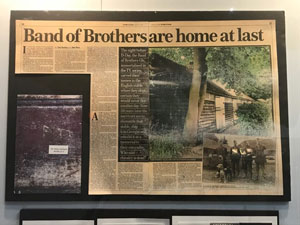 The museum commemorates the sacrifices of all American POWs through artifacts, visuals, text and oral history interviews with former prisoners of war. Two 30-minute introductory films alternate throughout the day. A self-guided driving tour is available on a road around the prison site. The cemetery, which is active and has more than 20,000 interments, contains the graves of nearly 13,000 Union prisoners of war. Free.

*National Infantry Museum & Soldier Center, Columbus
This 190,000-square-foot museum is the only one in the country dedicated to the American Infantryman, and USA Today readers voted it the Best Free Museum in America. Featuring state-of-the-art exhibits and interactive galleries, the museum traces infantry history from Colonial times to the present.

The Last 100 Yards ramp – the museum’s signature attraction – recreates the Rangers’ scaling of Pointe du Hoc on Omaha Beach and the parachute drop on Corregidor during World War II. Outside, an authentically recreated World War II Company Street takes visitors back to the 1940s.

Meeting the infantryman face-to-face on his journey, visitors come to understand why a soldier puts himself in harm’s way. Free; $5 suggested donation.

Magnolia Midlands
*World War II Flight Training Museum, Douglas
Once home of the 63rd Flight Training Detachment, this flight training center, one of only 50 built across the nation, was the first step to becoming a World War II pilot. The base at Douglas is the most intact, and many of the buildings and hangars look much as they did in 1942. One of the 13 original buildings still standing houses the museum, which features World War II barracks, aviation radios and equipment, aircrew combat weapons, flight suits and gear, and local artifacts such as ration books and newspapers. Outside, visitors can see the plane all pilots used for training. Take a self-guided tour to see where victory in the air war began. $3.

Historic Heartland
*Museum of Aviation and *Georgia Aviation Hall of Fame, Warner Robins
Situated on 51 acres next to Robins Air Force Base, the award-winning Museum of Aviation is the second largest museum in the U.S. Air Force and the fourth most-visited museum in the Department of Defense. The “Scott Hangar,” named after Gen. Robert Scott who wrote God is My Co-Pilot, contains numerous World War II aircraft and displays. This hangar also includes exhibits about the Tuskegee Airmen and the 507th Airborne Division. In addition, visitors can see the restoration of a B-17 onsite.

The Georgia Aviation Hall of Fame, located on the second floor of the Century of Flight Hangar, honors leading aviators, living and dead, whose extraordinary achievements or services have made outstanding and lasting contributions to aviation. Free. 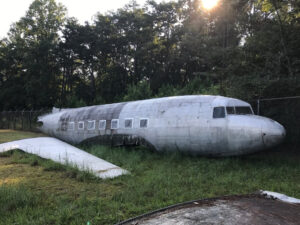 *National Museum of the Mighty Eighth Air Force, Pooler
This museum is dedicated to preserving the history and stories of the 8th Air Force. Visitors can experience a bomber mission and briefing, and see the ongoing restoration of the World War II B-17 Flying Fortress, “City of Savannah,” inside the Museum’s Combat Gallery. Self-guided or two-hour group tours led by docents are available. Free – $12.

Webb Military Museum, Savannah
Located in the downtown Historic Landmark District, Webb Military Museum features military artifacts and personal stories from the American Civil War to Desert Storm. Original uniforms, headgear and equipment are displayed in a walk-through setting, and diaries and notes beside the uniforms give visitors a glimpse into the soldiers’ lives. The museum also contains a Russian-made MiG (jet fighter aircraft) from East Germany, napkins from Hitler’s Berghof mountain retreat and a uniform belonging to Saddam Hussein. Free – $10.

*St. Marys Submarine Museum, St. Marys
The St. Marys Submarine Museum has the largest collection of original World War II War Patrol Reports outside the National Archives. The museum is the largest of its kind in the South and the fifth-largest in the country. With a vast collection of World War II submarine-related artifacts, models, photographs and other items, the facility is dedicated to educating, preserving and sharing the rich history and legacy of the submarine force. Free – $5.