With good timing, savvy shopping and contemporary flair, a Martinez family discovers that they can go home again

High school sweethearts Emily and Travis Azar made easy work of finding their dream home when they moved into her childhood home in Stevens Pointe in April. Making the Martinez house their own, however, required a little more effort.

Emily’s family moved into the house in 1998. After her parents, Tina and Robert Harn, moved to West Lake in 2018, the house – complete with its dark, dated 1990s-era colors starring burgundy and lime green, wall-to-wall carpeting and pickled walls – stayed empty for several months. The house needed a lot of work, and the Harns were trying to decide what to do with it.

Then they had an idea. Maybe Emily and Travis, who had lived in a house off of Walton Way since they got married in 2012, would be interested in buying the home. 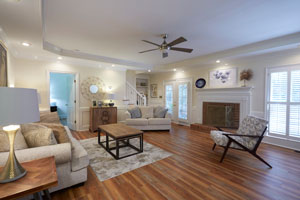 “We weren’t really ready to leave our house, but this was too good of an opportunity to give up,” says Emily.

Travis agreed. “Structurally, everything was in place,” he says. “It was the aesthetics that we wanted to change.”

While her mother favored a more traditional style, Emily wanted to update the home with a clean, contemporary look. The Azars enlisted the aid of an Atlanta friend who does interior design work on the side, and they spent a year working on the house.

“We did all of the renovations before we moved in, so the move was smoother than we thought it was going to be,” says Emily. “We thought we could work with this and make it our own. It turned out better than we ever could have expected.” 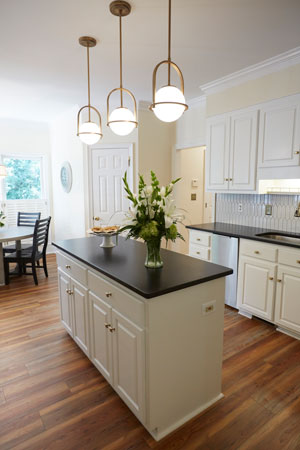 Since the coronavirus pandemic shut down schools this spring, Emily and Travis, who work in the Columbia County school system, have been spending more time in their new house with their 2-year-old son, Price, than they originally anticipated. She is the media specialist at Lewiston Elementary School, and he is an assistant principal at Greenbrier High School.

That bonus time has been a mixed blessing for the couple, who graduated from Lakeside High School and Georgia Southern University together and got married shortly after they finished college.

“One of the nicest parts about the pandemic is that we have had a lot of extra time in this house,” says Emily.

However, they miss being able to fill their home with friends. Other than inviting over both sets of parents for Easter dinner in their new dining room, they have not been able to entertain.

“We had planned to have a housewarming party in April, but we hope to have an outside, post-pandemic party in 2021,” Emily says. “All of our friends moved away, and now everyone has come back to where we started.”

Even though they had a year to remodel and shop before they moved, the shutdown made it challenging to get everything for their new home ordered and delivered on time. Like many young couples, most of the furnishings they had in their previous house were hand-me-downs from family and friends. With the new house, however, they were a little more selective.

“Knowing that this is going to be our forever home, we wanted to make an investment in our furniture. We wanted to get what we wanted instead of settling,” says Travis. 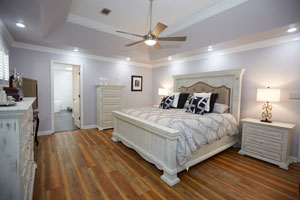 Once she became more at ease with her daughter’s contemporary tastes, Tina helped Emily shop and order accessories for the new home. “I’m easy to please,” Emily says.

She also likes knowing that Price and their second son, who is due in November, will follow the same path and go to the same schools that she and Travis did when they were growing up. Travis, who loves the outdoors, is excited about taking his sons fishing in the neighborhood pond. They enjoy kayaking on the Savannah River as well.

“I love that Price is going to grow up in this neighborhood,” Tina says. “The house feels good, but it feels different. Sometimes I think, ‘Maybe we should have stayed here and done this.’”

Blending Old and New
One of the first things the Azars had done in the house was painting the interior walls to brighten up the rooms.

“In the main living areas, I wanted a fresh, new look,” says Emily. “We didn’t want to have a lot of different colors in every room, so we painted every room the same color except for the master bedroom.” 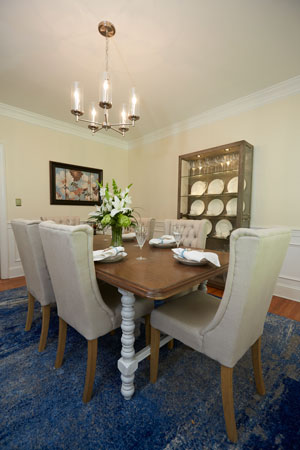 “These rooms were good choices to get creative because they’re small,” says Emily.

The dining room, which previously was covered with burgundy wallpaper, is a blend of the old and the new. The Azars have the same dining room table and chairs that they had in their former home, but they got a new china cabinet and bar cart for the space. The contemporary chrome chandelier replaced a bronze chandelier.

“We like having a mix of old and new,” says Emily.

The hardwood flooring in the foyer, dining room and living room tie these spaces in the front of the house together.

Focal Points
In the den, one of the Azars favorite places to hang out, they installed engineered vinyl plank flooring that closely matches the hardwoods in the front rooms. The new floor can withstand lots of wear and tear, and the newly painted walls previously were pickled.

The Azars bought new furniture for the den, and the contemporary pieces include a nesting coffee table with two smaller tables tucked underneath, end tables with herringbone-patterned tabletops, two chests and a pair of couches.

Built-in shelving on the staircase landing is the perfect place to display gold accent pieces and a small painting of their first home.

A first-floor guest room off of the den features the bedroom furniture that Emily and Travis had in their first house. They replaced the sinks and light fixtures in the adjoining bath.

The kitchen, which was lime green with pickled cabinets and dark granite countertops in its former life, was overdue for a makeover. To update the room, the Azars installed a picket backsplash, black matte granite countertops, new gold light fixtures, EVP flooring and new stainless steel appliances.

In addition, Emily says, “We painted the cabinets and got new hardware to give them a fresher look.”

The kitchen also includes a walk-in pantry and an adjoining breakfast nook.

“I like to cook, so the kitchen, along with the master bedroom, was one of our focal points,” Travis says. “It’s been great, especially with all of this time we’ve had on our hands.”

They gutted the master bedroom, which features a trey ceiling and an adjoining bath. Emily and Travis got new bedroom furniture for the new house, but she says, the room “was set up differently when it was my parents’ room.”

To provide a contrast with the rest of the house, they had the bedroom walls and some of the walls in the adjoining master bath painted gray.

“I tried to do things that we would like for many years to come,” Emily says.

In the master bath, they enlarged the shower and replaced the garden tub with a free-standing tub. The room also has two tall vanities, and black tile flooring. The hexagon tile matches the hexagon-shaped window in the room, and some of the wall space is covered with rectangular tile.

“Renovating the master bath was the hardest job and the longest job, but it was also the most satisfying,” says Travis. “We took a chance with the black tile, and we wanted to utilize the natural lighting so we kept the skylight in the ceiling.” 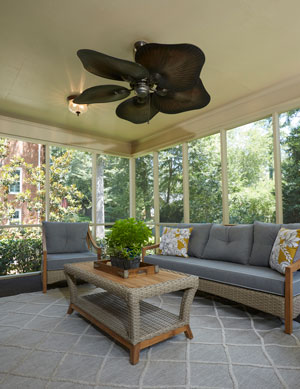 Play Space
The house also includes plenty of space for everyone in the family to relax and unwind. The upstairs includes a playroom for Price (which once was Emily’s brother’s bedroom), and her old bedroom is now Price’s room. His bed has a black wrought iron headboard, and, to transition the bedroom to a “big boy” room, they plan to redecorate it with a vintage airplane theme.

The Azars miss all of the built-in bookshelves they had in their old home, but Travis’ office has a pair of built-ins, where he keeps his history books and music memorabilia.

“I don’t play any instruments. I’m only a listener, but I love live concerts,” he says.

They also enjoyed sitting on the screened-in porch and grilling out on the adjoining deck before the summer heat arrived.

“For the amount of time we’ve been at home, the porch has gotten a lot of use,” says Travis. “It’s a great place to sit and think and drink our coffee.”

The screened-in porch features a ceiling fan, wicker furniture, a coffee table with a wood slat top, a rug, live plants, a baker’s rack and a black bench accented with gray patterned and gold pillows. 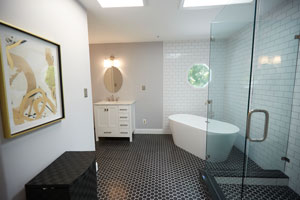 “The bench belonged to my grandmother,” says Emily. “My mom wanted to keep it in the family.”

In the backyard, they have a fire pit and furniture that belonged to Emily’s paternal grandmother.

The Azars also are enjoying the neighborhood, where they went on frequents walks during the quarantine and met some of their new neighbors. However, the people who live on either side, as well as in the house behind them, are the same neighbors that lived there when Emily was growing up.

“It’s a testament to the neighborhood and how timeless it is,” Travis says.