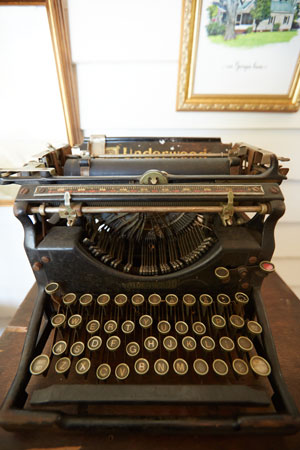 A Harlem resident has lovingly restored her maternal grandparents’ house, where she and her husband now live

As a child Rebecca Smith-Baines used to spend every summer at the home of her grandparents, Nannie Whitaker and James Daniel Hunt (Nannie Mama and Papa), on 480 acres of farmland in Harlem. Along with her mother and two sisters, she would board a train at Penn Station in New York City, where they lived, to make the trip South.

Her grandparents had dairy cows, pigs, chickens, cotton, peaches, grapes, scuppernongs and fig, pear, pecan and black walnut trees. As children, Rebecca, along with her sisters and cousins, spent the summer canning fruits and vegetables, shucking corn and shelling peas.

“Being a city girl, coming here every summer was the most wonderful time of my life,” she says. “Ever since my mother was a child, we have had a family reunion on this property every July 4.” 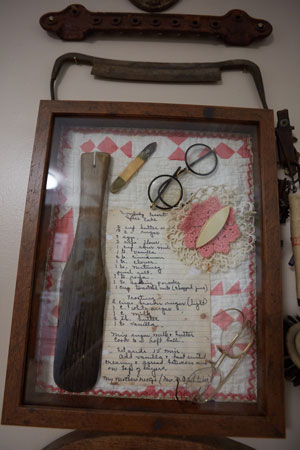 Full of cherished memories and close to her extended family, the house always held a special place in her heart. Now, Rebecca lives in the family home that she and her husband, Rick Baines, lovingly restored, and it is filled with many of her grandmother’s furnishings and other belongings.

Nannie Mama, who passed away in 1994 at age 102 and had inherited the property from her late husband, divided up the land between her five children. However, she left the house to Rebecca’s mother.

“My mother never had a house. In Brooklyn, you live in an apartment, so my grandmother left the house to her,” says Rebecca. “When she died in 2013, she willed the house to me. I was one of three girls, and she knew I would take care of it. I wish she could see it now.”

After skipping the family reunion in 2020 because of covid, the family gathered together again at the home in 2021. 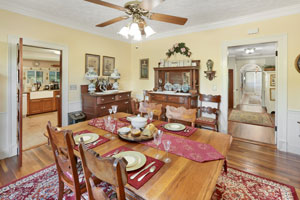 “That was the first time everybody had seen the house since we finished restoring it,” Rebecca says.

She started restoring the house in 2013, and once Rick came into her life in 2015 after she lost her first husband to cancer four years earlier, they picked up the pace.

“This man can fix and do anything,” Rebecca says. “Without his help, I could not have finished this project.”

The house, which has been constructed in three sections, has changed through the years. The original structure was built in 1887. After the first kitchen, which was separate from the main house, caught fire in the 1940s, Rebecca’s grandparents built an addition that included the 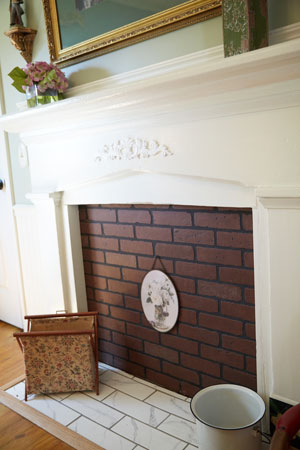 While Rebecca and Rick made some changes to the house when they restored it, the house still includes many features and furnishings that her family no doubt recognized.

“Most of the furniture is the original furniture,” says Rebecca. “I tried to keep everything as authentic as possible.”

The living room still has its original hardwood floors that were milled from pine trees on the property at Leitner Saw Mill, which was located on land that now is part of Fort Gordon. However, the “hump” in the living room floor, which was caused when the house settled but the fireplace didn’t, was eliminated in the renovations, and its absence was one of the first things Rebecca’s cousins noticed about the house.

The living room walls originally had 1/4-inch paneling, but Rebecca and Rick, who also have a home in Florida, compounded over it to cover the seams and lighten the room.

The two coffee tables in the living room belonged to Rebecca’s grandmother, and Nannie Mama bought the dining room table and chairs, buffet and china cabinet when she got married.

The hall tree in the dining room is original to the house as well, and Rebecca’s uncle made the dropleaf table, which is covered with family photos.

Rebecca’s grandmother, who was one of two students in Harlem High School’s first graduating class of 1910 and taught in a one-room schoolhouse until she got married, hand-painted the china in the china cabinet.

The kitchen, which has been remodeled completely, features cabinetry that has been expanded from its original 12-inch depth, tile flooring, granite countertops and a farmhouse sink. 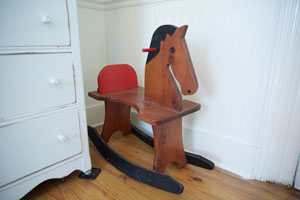 Her grandmother’s butter churn and water pitcher occupy a corner of the kitchen, and her wooden rolling pin hangs on the wall.

“I have all of her old wooden spoons, and I still use her measuring cups,” Rebecca says. “My grandmother would let us get in the kitchen every summer and do whatever we wanted, as long as we cleaned up. Her favorite things to bake were biscuits and peanut butter cookies. She was always trying to perfect her peanut butter cookies.”

A frame on the kitchen wall holds two pairs of Nannie Mama’s glasses, a handwritten recipe for her spice cake, a piece of quilt, a piece of tatting, a tatting shuttle and a sewing tool.

“I made it so that every time I walk in the kitchen I can see something special,” says Rebecca. 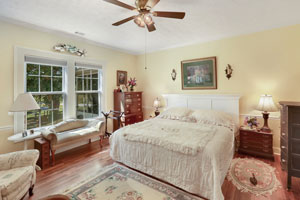 The three bedrooms, all of which have fireplaces, pay homage to her family as well.

Rick made the headboard for the bed in the master bedroom out of the original door to the back porch, and they built the bed frame. The furnishings also include Nannie Mama’s rocking chair as well as a washstand and dresser that are original to the house. Rebecca’s grandfather made the bookcase for her mother when she was in high school.

Another bedroom, which features the original pine flooring, includes two restored white cast iron beds – a twin and a double – that belonged to her grandmother and her grandfather’s original armoire. 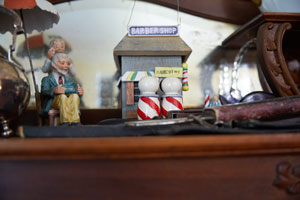 Rebecca decorated the third bedroom, painted green in honor of her mother’s favorite color, with an original washstand, bedside tables, kerosene lamps and a framed sterling silver dipper that they used to retrieve water from the well. An antique rocking horse sits in a corner, and her grandmother’s steamer trunk is at the foot of the bed.

The door from the dining room into the hallway was the original front door to the house, and Rick’s nephew built an arched doorway in the long hall as well. As her favorite room in the house, Rebecca has turned it into a veritable museum of family history.

“The hallway ended up being the masterpiece of the place,” Rick says. 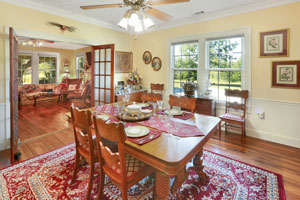 A white wardrobe, made by Rebecca’s maternal great-grandfather, Toombs Whitaker, sits in the hallway. On the side of the wardrobe hangs one frame containing two pictures of Nannie Mama – one at age 19 and one from her 90th birthday – and another frame with photos of her Papa, who was a farmer and a car repairman for Southern Railway.

Her grandfather made the bookcase in the hallway, and two of the walls feature the original clapboard on the outside of the house. An old dairy can from the farm sits on the floor.

The hallway also includes mementoes of Rebecca’s father, who immigrated to Brooklyn from Russia at age 14 with his mother and brother to escape religious persecution, and his World War II service. Her father, a barber by trade, became a medical technician during the war because he knew how to use scissors, says Rebecca.

He was part of the Normandy invasion, and color copy of a map of the invasion hangs on the wall. Her father, who spoke six languages, also served as an interpreter during the war, and he was involved in the cleanup of Nazi concentration camps Buchenwald and Dachau. 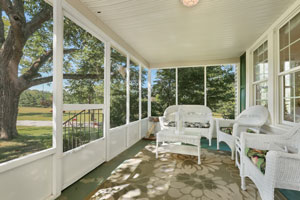 “My uncle worked at Camp Gordon during the war and would bring home the GIs for a home-cooked meal. My father was one of them. The rest is history,” Rebecca says.

Two windows from the original house also hang in the hallway, where they serve as a backdrop for vignettes that Rebecca created out of her grandmother’s things.

Rebecca is one of 18 cousins (all of them live in the area or on land surrounding Rebecca and Rick’s 49 acres), and she gave a window to each of them and her sisters.

“I love history. That’s why I cherish this house so much. We restored as much as we could,” Rebecca says. “I think we all should respect where we originally came from and how we got here.”