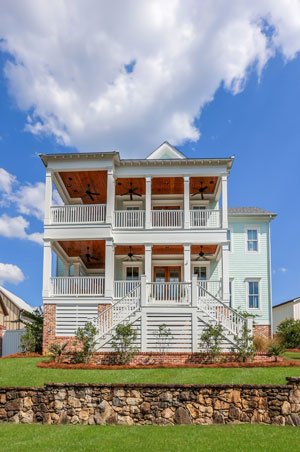 A family of six lives the coastal life in their River Island home.

If you’re not careful, the River Island home of Heather and Foy Meyer might put you in an altered state of mind – but in a good way. Even though you know in your head that you’re in Evans when you arrive, the coastal décor and light, bright, white interior almost convince you in your heart that you’re miles away at an ocean retreat.

With one glimpse of the house, you can almost smell the saltwater, hear the waves tumbling ashore and feel the sand between your toes. After all, the seafoam shaded exterior – or the “turquoise” house that the Meyers’ four daughters, who range in age from 17 to 10, fell in love with on sight – offers serious beach vibes.

“Everybody knows the ‘turquoise’ house,” says Heather. “Our girls loved it as soon as they saw it. I don’t think they cared what it looked like inside. I would never have picked the color to paint the outside, but I love it.”

The Meyer family moved here from Lexington, Kentucky almost two years ago, and they initially lived in a three-bedroom apartment for several months.

“We were looking to build in River Island. Another couple built this house, and they lived in it for less than a year. It was the only house we looked at in River Island,” she says. “We didn’t really do anything cosmetic. We could just move right in, which was nice.”

Open and Airy
In addition to Kentucky, they have lived in Louisiana, Texas and Maine. Make no mistake, though. Heather and Foy, natives of Tampa, Florida who met in high school, and their girls are beach people through and through.

“We love to vacation at Seaside, Florida and Nantucket,” says Heather. “The house fit in with our style. When we moved in, we wanted an open, airy, brighter theme.”

They lived in a traditional brick house with traditional furnishings in bluegrass country, but their new home called for a change of pace. Even though they didn’t have to make any major changes to the house, they sold almost all of their previous furniture and bought new furnishings that would complement the home.

“We just love the beach. We wanted that open, airy feel, and we have incorporated a lot of the things we’ve collected in the décor,” says Heather.

A white fence with brick columns and a wrought iron gate surrounds the back yard, where a striped umbrella shades three lounge chairs on the patio.

Open on two sides, the back porch is one of their favorite spaces to spend time. The porch features a brick floor, tongue-and-groove ceiling, recessed lighting, two ceiling fans, wicker furniture, a TV and a brick wood-burning fireplace with a raised hearth and wood mantel. 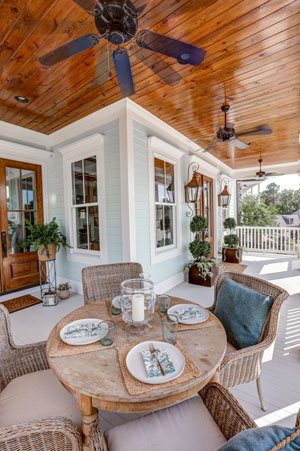 A strand of oyster shells rests on one side of the hearth, and a lantern occupies the other side. Two cube stools sit in front of the fireplace, and a round white table offers a contrast to the brown wicker furniture. A sweetgrass basket hangs on the wall above a sideboard on wheels.

“The original owners had the same piece there, and they took it with them,” Heather says of the sideboard. “I hunted all over to find another one. It’s super durable. We can put all kinds of food on it. We love to have people over. We grill out all the time.”

Double doors from the back porch lead into the kitchen, and this is the entry that everyone uses. After all, it’s the kind of household where back-door neighbors are the best.

The kitchen includes white cabinetry, quartz countertops, a marble subway tile backsplash, a pot filler, a farmhouse sink and hardwood flooring, which flows through most of the house.

The island, which includes a wine fridge, is painted light blue in a striking contrast with the cabinets, and a trio of acrylic chairs are tucked beneath the ledge.

“The chairs are strong, durable and easy to clean,” says Heather. “They don’t break up the view.”

A pair of oyster plates, which they got from a pottery place in Maine, hangs on the wall. 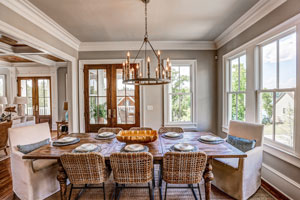 Whiter and Brighter
The adjoining dining area includes a long wood table. “I like the driftwood-y look of the table,” says Heather. “And it’s been durable for the kids.”

Wicker chairs with cushions line each side of the table, while upholstered seats anchor each end.

“It’s the only eating area in the house, so I wanted something that would be comfortable,” Heather says. “We can put a bunch of people around the table.”

Their white, gold-rimmed china belonged to her in-laws, who have been married for 55 years. Heather loves the simplicity of the china, and the rims of the plates accent the gold bowl that serves as the table centerpiece.

The dining area flows into the great room, and the two spaces overlook the front porch and the Savannah River across the street.

“We love our view. You can see the river from most of the windows,” says Heather. “We’re not on the river, but we can see it.”

Natural jute seagrass rugs, which were cut and bound to fit the rooms, accent the dining area and the great room.

“In this house, I really wanted to feel like we were bringing nature from the outside in,” Heather says. “I love white houses. I feel like everything now is going a lot whiter and brighter.”

A coffered wood ceiling in the great room distinguishes it from the dining area. The room also features a gas brick fireplace, a built-in bookcase and a brushed bronze chandelier. Two cane chairs sit on the opposite side of the room from a pair of lounge chairs that are arranged side-by-side against a wall.

She found a painting on the wall in a Columbia, South Carolina store, where, along with Merry’s Home Furnishings, she got most of their furniture. “It looks like River Island to me,” she says of the painting.

An arched doorway with brick on either side leads to the mudroom, downstairs laundry area and powder room.

The powder room includes a marble vanity and two seagull paintings. “They make a big splash for a small room,” Heather says.

A beadboard wall accents the mudroom. Baskets are tucked beneath the built-in bench, and books fill the shelves above. “It’s like the public library,” says Heather. “All my friends that come through take the books.” 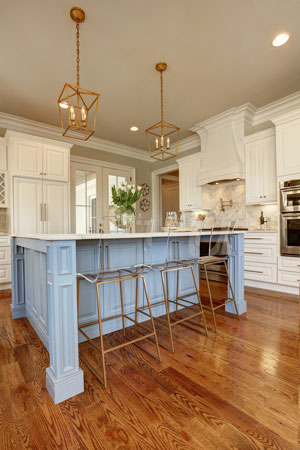 Selling Points
Another selling point of the house was the upstairs apartment. This space, which has a separate entrance, includes two of the girls’ bedrooms. Although the bedrooms are connected, each room has its own bath.

Sheers hang on the wall behind a wicker bed in one room, and the bed in the other, where a white palm branch accents one wall, has an upholstered headboard.

The apartment also features hardwood flooring and a kitchen with a brick backsplash, a refrigerator, a dishwasher, a microwave and blue cabinetry that matches the island in the main kitchen.

In the sitting area, the Meyer girls watch TV from a sectional couch and an upholstered chair that unzips into a bed.

A picture that spells “Nantucket” in large white letters stacked in threes hangs on one wall, and a decorative wooden whale from Nantucket hangs above a wood chest. The chest, along with a wood wine credenza with a marble top in the downstairs hallway, came from the house in Lexington.

On a table of seagrass cloth behind the couch, a shelf holds a skinny dough bowl filled with sea glass that they collected in Maine. “We like collecting shells, but no shells wash up in Maine. It’s all sea glass,” Heather says. 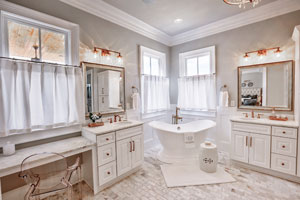 The chandelier consists of wood beads and candle lights, and two baskets with lids provide storage space for blankets. Another pair of oyster plates from Maine are centered on the wall above the bed, and two swivel chairs are placed at the foot of the bed.

In addition to the marble flooring and shower, the room includes a soaking tub, two sinks and a separate vanity area with an acrylic chair.

“It’s all pretty neutral,” says Heather. “You can do anything with it.” 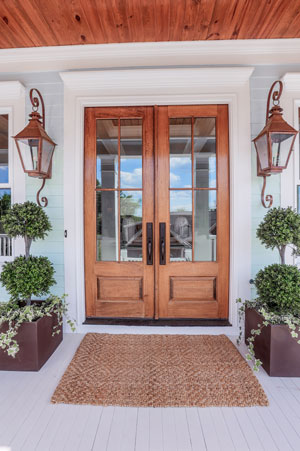 Two double doors in the master bedroom open onto a porch that faces the river, and Heather and Foy like to sit outside in the two white Adirondack chairs and have coffee.

The porch also features a tongue-and-groove ceiling, three ceiling fans and a pair of gas lanterns on the wall. The gas lanterns remind them of New Orleans, where Heather and Foy lived for three years when he was attending law school at Tulane University.

“We get a great breeze up here, and the house has a better view from the second story,” Heather says.

Lowcountry Feel
The downstairs front porch is just as inviting as the rest of the house. “We eat on the front porch a lot, and we entertain here,” says Heather. “The girls sit out here and do homework.”

The spacious porch includes another trio of ceiling fans, more gas lanterns and a round wood table with wicker chairs.

“I love everything about living in River Island. It’s the only neighborhood we considered. It has a Lowcountry feel. It’s Southern without being on the coast,” Heather says. “We love walking on the boardwalk. Every night we go out in the golf cart and visit. Even when it’s cold, we bundle up and go out on the golf cart.”

River Island life suits the Meyer family, but it comes as no surprise. Years ago, when Foy, who now serves as general counsel for Savannah River Remediation, had come to the area to work, Heather recalls, “We said, ‘If a job ever comes up, we want to live in Augusta.’”

Her husband would like to retire in Nantucket, she says, and she would have no complaints. Otherwise, Heather says, “Unless he’s moving me to a beach somewhere, I’m here.”