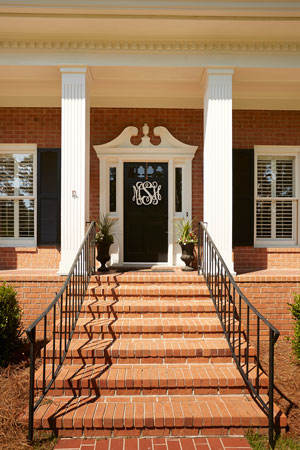 A young couple has a vision for a West Lake home that needed a little imagination and TLC to bring it into the 21st century.

When it comes to home remodeling, Martinez residents Megan and Tater Simpson certainly aren’t afraid of a little – OK, a lot – of work. And the results of their fearless venture into creating new and improved living space are on full display in their charming West Lake residence.

The Simpsons had remodeled their first house, a ranch in Watervale, so they had no intention of backing down from another challenge. Vacant for five years before they bought it, the house had damage from the 2014 ice storm including fallen gutters and a limb through the roof.

“My sister told me we would be crazy to buy the house,” says Megan. “It needed so much work.”

The Simpsons were not deterred, however, and they moved into the house in November 2014. Not without the help of a little divine intervention, though.

They first looked at the house in August 2014, but someone else got it before they did. When that deal fell through, their Realtor came back to them to let them know the place was back on the market.

They had seen the potential of the house, and they were ready to execute their vision for it. “It’s got great bones, and I thought we could really do something with it,” says Megan, who gets a lot of inspiration and design ideas from houzz.com. “I guess I wanted a project at the time.”

The house also had other features the Simpsons had on their wish list such as a master bedroom on the first floor and more space for a family that now includes 3-year-old Tate and 1-year-old Catherine.

And what does Megan’s sister say about the house these days? “She loves it,” Megan says. 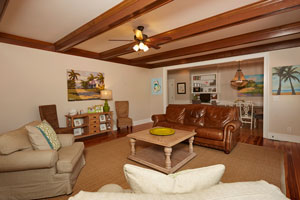 Sticking to the Plan

After their first home sold in a week, the Simpsons moved into the West Lake house while the renovations were underway. Beginning with the kitchen, it took them about six months to remodel the house. However, they didn’t finish the upstairs bathroom until June of this year.

That space played an important role in the initial stages of the project, however.

“We lived upstairs. Our coffeepot and microwave were in the bathroom,” Megan says. “It’s fun to plan it, but it’s not fun to live it. There were people in our house all the time.”

Even though they came home to a houseful of their new best friends, aka contractors, many nights, they never lost sight of the long game.

“We had a plan from the beginning,” says Tater. “We did the whole house.”

With the exception of the bedrooms, which are carpeted, the Simpsons replaced the parquet and tile floors throughout the house with hardwood pine flooring. Not until they had jackhammered out the 2 1/2-inch layers of concrete they found beneath the tile, though.

The den is their favorite spot in the house, and they took out the wall between den and the breakfast area to open up the space. The original wood paneling in the room is gone, updated with neutral paint on the walls and colorful artwork by Southern artists.

They kept the wood beams in the ceiling, the built-in bookcases (now painted white) and the large picture windows that overlook the 12th fairway and 13th green of the West Lake Country Club golf course.

“Everything was here, but we took a 1981 house and brought it back to life,” Tater says.

The fireplace has the original mantel, but they whitewashed the brick surround. “We kept the mantel because it matched the beams and it was original to the house,” says Megan.

In the breakfast area, they added the chair rail, painted the walls and replaced the light fixture. Another colorful painting hangs on a wall.

A desk area connects the breakfast area with the kitchen, and the Simpsons painted the wood desk white and installed a colonial white granite surface on top.

Hobbies, Heritage & Herringbone
In the front of the house, the living room and dining room offer glimpses into their interests.

The living room reflects the love that Tater, who grew up hunting and fishing with his father and grandfather, has for the outdoors. 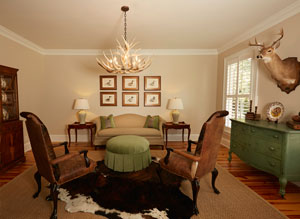 Yes, he did. The room also includes an antler chandelier, similar to one that Tater’s parents had in their house; fish and duck pictures on the walls; a cowhide rug and a pair of leather and cowhide chairs.

The dining room décor, such as a mirror, a painting and a group of plates on a wall, features an Asian influence in a nod to Megan’s heritage.

“I love the Oriental look,” says Megan, who is one-quarter Japanese. “My mother-in-law gave me the mirror and the painting. Some of the plates are from our china set, and the others came from random antique stores around town.”

The secretary in the foyer is a find from a Facebook yard sale site, and Megan added mirrors to it. The foyer also includes a herringbone pattern of oak wood in the pine flooring.

“I wanted all pine floors, but you can’t do herringbone with pine,” Megan says.

Instead, they used oak wood, which they also discovered on the stairs when they pulled up the carpet, to create the herringbone pattern.

The house originally had 2 1/2 baths, and these spaces have undergone remarkable transformations.

The Simpsons turned a half-bath downstairs into a full bath by taking a portion of an L-shaped closet in the room and converting it into a shower with subway tile. The bath also features a small chandelier and a porcelain tile floor.

“It mimics marble, but it’s more durable,” Megan says of the flooring. “I like everything to look white and shiny. I think it makes it look clean.”

The brick from the den fireplace extends into the upstairs bath, which also includes porcelain tile flooring and quartz countertops. They replaced the single sink on the vanity with a double sink as well.

They gutted the master bath, putting in new cabinetry and quartz countertops and replacing the small enclosed shower with a claw-foot tub. A walk-in shower, which features subway tile and a rain showerhead, occupies the tub’s previous spot.

The Simpsons kept the vanity area with built-ins in the master bedroom. However, they removed decorative spindle posts from the tops of the drawer space and added quartz countertops to the built-ins. 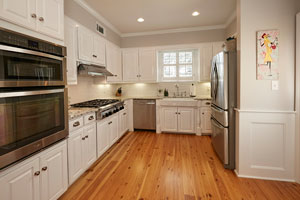 The décor in the master bedroom includes Oriental lamps on the bedside tables, a pillow with an Asian motif on the bed, Asian figurines on the built-ins and two pictures of waterfowl above the bed. Full-length windows overlook the backyard.

“We have views of the golf course from every bedroom,” says Tater.

The bed in Tate’s room has an iron headboard, and the drawer pulls on the chest are shaped like Labrador retriever’s heads. The Simpsons had an energetic yellow Lab, but they gave the dog to a family with a farm – and lots of room to run – when their children came along.

Another downstairs room, which previously was a den with brick on one wall, became a nursery for their children. They whitewashed the brick and replaced the wood paneling and built-ins with a white chair rail and white bookcases.

After all the work they have put into their home, the Simpsons call the West Lake residence their “forever house.”

“Unless I win the lottery and I can watch somebody hand-pack my plates,” says Megan, “I’m not going anywhere.”