Roars of approval from the gallery rock the towering pines of Augusta National Golf Club with excitement during the Masters Tournament. A few miles away in River Island, however, there’s nothing but peace and tranquility among the various pines in the home of Kelly and Steve Farmer.

The pines they prefer don’t frame golf holes, though. They make up the flooring, beams and furnishings in their home.

“We love old antique pine pieces. My mom used to have a big antique mall in Augusta,” says Kelly. “We also collect pottery. We go to places like Cashiers, North Carolina and Isle of Palms to find it.”

The Farmers also have heart pine flooring throughout the house. “They are 9-inch boards. We wanted them as wide as we could get them,” Kelly says.

The Farmers first moved to River Island in 2005, but they have lived in their new home, which has a view of the Savannah River and the mouth of Jones Creek, since September.

“Steve always wanted to live on the water.” Kelly says. “He loves to fly fish, fish and kayak.”

They found a house plan that they liked – the 2017 Southern Living idea house on Bald Head Island, North Carolina. A draftsman tweaked the interior design for them, and local Southern Living custom builder J. Reynierson Homes constructed the house.

“We had never built a house from the ground up. It was fun to start from the beginning,” Kelly says. “I enjoyed building more than I thought I would. There’s nothing we don’t like.”

Steve, of course, was clear about his role in the process. “I just agreed with everything,” he says.

And why not? Almost all of the porches and windows of the house, built on a pie-shaped lot, offer a view of the river. “It’s why I picked these house plans,” says Kelly, a retired teacher. “There’s something sweet and peaceful about looking at the water.”

With the river view, the porches are an integral part of the home. The three porches along the front of the house – a screened grilling porch, another screened porch and an open covered porch – overlook the water and the trees draped with Spanish moss along the waterway trail.

“You can see the sunrise and sunset from the porches, and we have shade all day,” says Steve. “There are only three windows in the house where you can’t see the water.”

The open porch features a porch swing, two black rockers, four white columns, metal railings (so they can see the water through them) and a round mosaic table.

The screened porch includes a raised-hearth brick fireplace, a heart pine mantel, TV, ceiling fan, bead board ceiling and painted metal railings. This porch, where Steve eats breakfast and dinner every day, is his favorite spot in the house.

“The day just rolls off your back when you come out here and sit,” he says. “When you’re sitting down, you can still see the water.” 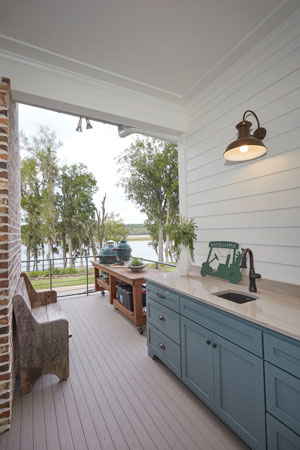 The brick on the fireplace extends up to the second story screened porch, where a pair of chaise lounges and a ceiling fan offer another place to relax and enjoy the view. The space also includes a round table with four chairs, recessed lighting and a bead board ceiling.

When it comes to porches, the back of the house is not neglected either. The back porch includes two ceiling fans, wicker furniture, a porch swing and a salted concrete floor that matches the salted concrete walkways.

The Art of Living
Don’t let the porches and the relaxed atmosphere of the home fool you, however. The Farmers stay busy by pursuing various past times and spending time with their six grandchildren.

“Steve is an accountant, but he has lots of hobbies,” says Kelly, who likes to walk on the neighborhood trails alongside the river.

Steve enjoys painting, fly fishing and playing numerous musical instruments. “I just like being outside,” Steve says. “I don’t sit still much. I’m always doing something.”

He paints in the bedroom above the garage, using pen and ink, watercolors and acrylics, and his artwork is displayed throughout the house. However, he likes to enjoy his music in the fresh air.

“I play a lot of instruments, so I spend a lot of time on the porch picking,” Steve says. “I’m in a bluegrass band at church, and we’ll practice here.”

When he was boy, Steve learned to play the guitar from his father, and he taught himself how to play the banjo, mandolin and dulcimer. “You can’t be in a bad mood when you’re playing a banjo,” he says.

However, the mandolin is his favorite instrument. “It has a sweet sound, and it’s very intuitive to play,” says Steve. “It’s small, compact and easier to carry around than a big bass.”

Their grandchildren also have an interest in music because, when they visit, they go straight to corner of the master bedroom where Steve keeps two guitars, a banjo, a mandolin and a dulcimer.

“Those are the ones that it doesn’t matter if the grandkids start banging on them because that’s the first place they go,” says Steve. “The good stuff is locked in a closet upstairs.”

Although they like to fill their house with family and friends, the Farmers make the most of their time away from home as well.

“We started traveling four or five years ago, and we always get a piece of artwork on our trips,” says Kelly.

In the butler’s pantry, for instance, they have a photo of a waterfall by Hendersonville, North Carolina artist Alice Greko. She frequently combines painting and photography into one image by painting her frames to continue the photos. Another Greko piece hangs in an upstairs bath.

The butler’s pantry also includes artwork that the Farmers got on a trip to Israel including a picture of Jericho from Jerusalem. On the bar, an oval tray holds Hebron glasses and candlesticks from the historic West Bank city of Hebron. 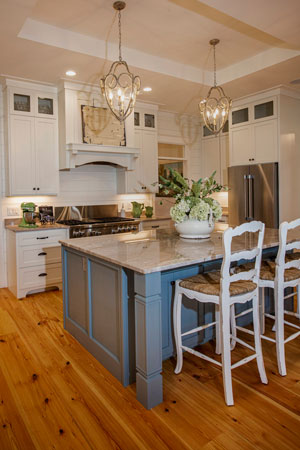 Built for Togetherness
Artwork in the adjoining kitchen includes a picture from Italy, and another depicts the church in The Sound of Music.

The kitchen features a large island with a Quartzite countertop, different Quartzite on the perimeter countertops, a trey ceiling, glass-front cabinets on top, stainless steel appliances and a farmhouse sink.

When they picked out their island countertop surface, the Farmers immediately agreed on the piece they wanted – much to the surprise of the vendor. “They said it’s seldom that a husband and wife come in and fall in love with the same piece,” says Steve.

They found a decorative ceiling tile, which came from an old building in Charleston, in a store in the coastal South Carolina city, and they propped it on a shelf above the stove.

The home features an open floor plan where the dining area is nestled between the kitchen and great room.

The great room includes four sets of double doors to the porch, a raised-hearth fireplace with a hand-hewn pine mantel from the center of the tree, a pine table behind the couch where decorative orbs fill a dough bowl and a flat-screen TV which showcases changing artwork when the television is turned off. “I can change the picture,” says Kelly. “I can put in a picture of the grandkids.”

The great room is Kelly’s favorite spot in the house, where she likes to sit in her blue swivel chair.

“The chair twirls around, and I can turn and look at the river and rock the baby,” she says. “We can all be together here.”

The great room and the dining area feature stained pine beams, and along with the kitchen and powder room, they have shiplap walls.

Kelly found the sliding laundry room door and the pantry door at an old antique store. An antique pine hutch in the hallway is filled with colorful pieces of pottery.

The master bedroom features motorized blinds, which also are found in the great room; a four-poster bed; an area rug; a chandelier and two upholstered chairs in front of large windows that overlook the river.

The adjoining master bath includes two separate vanities, the “grandkids’ car wash” walk-through shower, a stand-alone claw-foot tub, shiplap walls and transom windows above the doors. Steve painted the acrylic, which depicts the water view from the River Island clubhouse, that hangs on the wall. 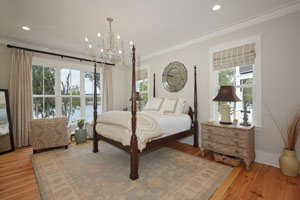 Memories & Sharing
The second story of the house features a spacious room where the grandchildren, who range in age from 9 months to 7 years old, can play. The room includes shiplap walls and a ceiling fan, and Steve painted the room’s two watercolors of old Augusta stores.

In one of the upstairs bedrooms, two prints of watercolors that Steve did – he gave away the originals – hang on a wall. The prints show the sixth and 13th holes at Augusta Country Club before the golf course was renovated.

Furnishings in another second story bedroom include an off-white, two-poster bed; a round pine table; a corner cabinet; and a stand-alone, full-length mirror.

One of their most cherished possessions – the Nicklaus Twenty Commemorative Over and Under Shotgun – hangs in a shadowbox frame on a wall in the upstairs hallway. The Browning shotgun was passed down to Kelly and Steve from her late father, Forrest Hensley. The left side of the shotgun features a bust portrait of Jack Nicklaus set against a U.S. flag and a golf course scene with his facsimile signature highlighted in gilt. The right side shows Nicklaus in mid-swing set against a U.S. flag and golf course scene with the caption “The Nicklaus Twenty” highlighted in gilt.

In a 2013 Golf magazine story, Nicklaus recalls that Browning made a commemorative 20-gauge shotgun after he won his final major at the 1986 Masters, playing off 20-gauge and 20 majors. (In addition to his 18 professional majors, Nicklaus won the U.S. Amateur twice for a total of 20 major wins.)

Kelly’s father kept the shotgun in a case, but the Farmers mounted it in his memory. According to Kelly, the shotgun was part of an investment opportunity in which her father was involved. Originally, about 100 shotguns were slated to be manufactured, Kelly says, but only about 20 actually were made.

“Everything in the house means something,” says Kelly. “It brings back memories.”

White Magic
They have three different shades of white inside the house – in the master bedroom, kitchen and upstairs bedrooms – and another shade of white on the exterior. 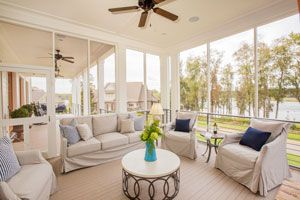 “Whites are so interesting. There are so many,” says Kelly. Steve agrees. “You can go warm. You can go cool,” he says.

“We accented with colors and textures and shapes and pictures,” says Kelly. “It brings out the wood and warms things up.”

And warmth, accompanied with the welcoming atmosphere, is the operative word in the Farmer house.

“We feel like we’re meant to share our home,” says Kelly. “Homes are meant to be shared.”