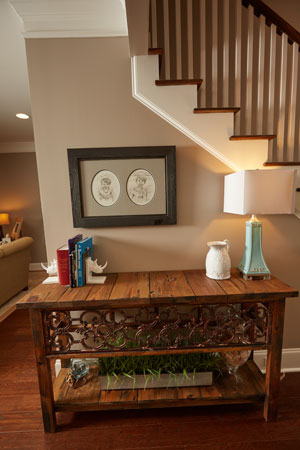 From paintings by favorite artists to images of their twin sons, a River Island couple fills their home with meaningful keepsakes.

One step into the rustic River Island home of Emily and Dallas Williams immediately lets guests know that this is a house where art and family are treasured. The personal décor features paintings by local artists, photos from their 2011 wedding and pictures in a variety of mediums of their 5-year-old twins, Macon and Grant.

(The boys certainly know how to make an entrance as well. After all, they were born on Father’s Day in 2013.)

“Every picture in the house has a meaning behind it,” says Emily. “Either a friend has done it, or they are pictures from our wedding or of our boys.”

The homage to friends and family begins right inside the six-paned front door. Tucked by the door in the corner of the foyer, a teal chest by Bramble, a Washington state-based furniture company that makes its products from sustainable mahogany, is topped with photos of the twins as infants. Above a table that was custom-built by Chris Pellegrino, pencil drawings of the boys at age 2 hang on the wall. 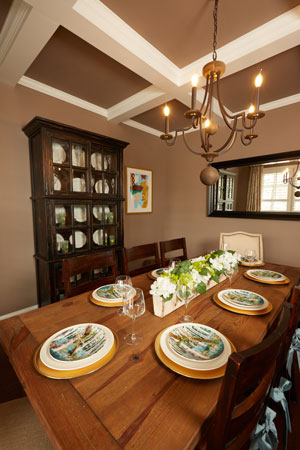 “We gave a photo that was taken in Hilton Head to Dallas’ parents, and his dad had them done for us,” Emily says of the drawings.

An acrylic landscape by local artist Richard Worth hangs on the wall by the arched entry into the dining room. (The Williamses won the painting in an auction at the Central Savannah River Land Trust Bash on the Banks one year.)

Featuring a coffered ceiling, the dining room includes a Pellegrino-built dining room table as well. The distressed china cabinet also is a Bramble piece, and a bread trough in one corner is filled with decorative orbs.

Another corner holds a cherished family treasure – a traveling chest that once belonged to Dallas’ great-grandfather, Macon Lunceford Williams, for whom Macon is named. The trunk took on even more significance when Dallas’ mother used it to store clothing that had belonged to his brother after he was killed at age 20 in a 1988 car accident. She gave the trunk to Dallas and Emily on the night of their rehearsal dinner.

“That meant a lot to me that my mother-in-law trusted me with the trunk,” Emily says.

A guest bedroom holds another bit of family history. On a desk in the room, Emily has a framed photo of her grandmother that was taken in 1939 when she was 19 years old. The portrait was taken on the night of the Atlanta premiere of Gone With the Wind, when Emily’s grandmother was the Atlanta Symphony’s first string violinist for the occasion. As if the performance wasn’t memorable enough, Clark Gable even asked the beautiful young musician for a dance at the reception following the premiere.

“I got the picture from the night that she danced with Clark Gable, and my dad has her violin,” says Emily.

A painting of a dancing couple (no, not Gable and Emily’s grandmother), which was done by the mother of one of Dallas’ best friends, hangs on a wall in the guest room. “I think the man in the painting looks like Dallas,” Emily says.

In the guest bath, an acrylic painting, “Misty Night at Sacred Heart” by Margaret Ann Smith, hangs on a wall. Sacred Heart Cultural Center has special meaning to the couple because they held their wedding reception there. A print (number one of 300) of their favorite restaurant, Sheehan’s Irish Pub, by Donna Whaley occupies another wall. 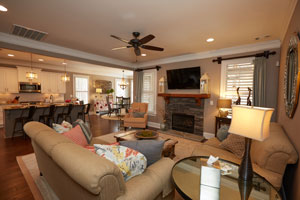 Easy Living
With the flow of the family room into the kitchen and breakfast area, the living space in the home paints a picture of togetherness. “We like the openness of the house,” says Dallas.

The kitchen features granite countertops, stainless steel appliances, a subway tile backsplash, an island, a walk-in pantry and a wine refrigerator. The space is easy to navigate, and Grant, who was named Grant Parker after Emily’s side of the family, often makes coffee for his parents in the morning. The décor includes a picture of Amen Corner at Augusta National Golf Club above the pantry.

The Williamses rent out their house during Masters Week, and a lazy Susan on the round table in the breakfast area is the ideal spot to hold Masters-themed cookies and cake pops, along with adult beverages, for their tournament guests.

A large tobacco basket hangs on the wall above a white Bramble hutch, painted with a red floral design, and a painting of their first house in Richmond County hangs on another wall. A freestanding bar sits in a corner of the breakfast area. “It goes with the rustic vibe,” Emily says of the bar.

The family room includes a gas fireplace with a stacked stone surround and a wood mantel. A dough bowl filled with grass rocks sits on top of the coffee table, which slides open for storage. 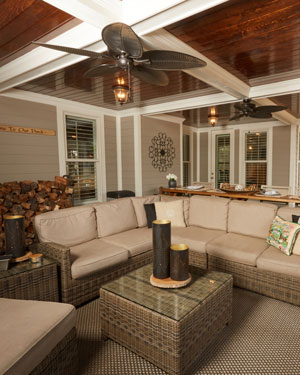 The Williamses also enjoy spending time with family and friends outside. When they moved into their home (next door to a friend Dallas has known since first grade) in December 2016, Dallas says, “There was just a small sitting area outside.”

However, the Williamses replaced it with a covered porch featuring a wood-burning fireplace and an outdoor kitchen with black matte granite countertops, a flattop grill, a Big Green Egg and a small refrigerator.

The coffered ceiling features stained pine flooring and a pair of tropical ceiling fans, and the seating area includes wicker furnishings. Pellegrino also built the high-top table behind the couch.

Although Emily and Dallas typically go to the Masters Tournament every year, they made other plans in 2017. They finished the covered porch just in time to hold a final round viewing party in their new outdoor space.

“It’s an extension of our home,” says Emily. “Every Saturday during football season, this is where we are.”

When they aren’t spending time on their covered porch, the family enjoys the amenities of River Island. Dallas has a fishing boat with a friend, and they take it to Betty’s Branch nearly every weekend during the summer.

“We never thought we would be neighborhood people, but we love it here. There are so many kids,” says. Dallas “But the main attraction was the river.”

‘It’s All Emily’
Hilton Head Island is a favorite vacation spot for the family, and an oil painting of the four of them in the ocean at the South Carolina beach by Columbia County native Stephanie Forbes hangs in the upstairs hallway.

They also commissioned Forbes to do a triptych of paintings in the master bedroom, which features a trey ceiling and built-in drawers.

“It’s all Emily,” Dallas says of the home décor. Except for one corner of the bedroom where he made his mark with a studded leather armchair.

“That’s the one piece of furniture in the house that Dallas picked out,” Emily says.

And he loves it. “That’s a comfortable chair,” he says. “This is my chair.”

The curtains in the upstairs guest room are one of Emily’s favorite features in the house.

“Every room started around the window treatments, and I went from there,” she says. “I love fabric. I’m obsessed with fabric. If Dallas would let me, I would change them every year.