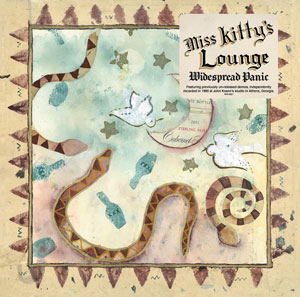 There’s no question that Athens, Georgia has been the home of some serious music culture through the years. With bands like The B52’s, R.E.M., Washed Out and Pylon on the shortlist, it’s no wonder this eclectic electric Classic City is known worldwide as the East Coast sonic-boom town.

Widespread Panic, another Athens original, has been a Southern jazz-blues- explosion-jam-rock jewel in the crown since forming in 1986.

Blazing new trails and wearing out the roads of the world, Panic has been a fan-driven tour pioneer with hordes of loyal Spread Heads steering the ship.

Commonly grouped with bands like The Grateful Dead, Phish and The Allman Brothers Band that earned commercial success without typical airplay and promotion, Panic’s uniquely accessible and hook-stomping stream of good-time jams places them among the finest Southern Rockers.

With a lush discography of studio and live recordings, their latest release, Miss Kitty’s Lounge, is a deep dive of demos recorded in 1990 and conjures up the energy and spirit of the band in a whipped casserole of absolute awesome.

Each track taps into a brew of raw and unfiltered, blazing-edge craftsmanship and ignites a raw perspective into some of their finest tunes.

The shelf life of Miss Kitty’s Lounge is as fresh and yummy today as it was 32 years ago and will remain in the infinite bread and butter pickle jar of Georgia’s finest music.