Good things come to those who wait as eight champions were crowned at the Drive, Chip and Putt Championship last year.

The 80 boys and girls who qualified for the 2020 Drive, Chip and Putt Championship got to vie for the overall titles in their age divisions at last on the eve of the 2021 Masters Tournament. And with perseverance, determination and consistency, eight worthy champions ended up in first place after a year-long wait to go to Augusta National Club.

The 2020 championship was postponed because of the coronavirus pandemic, and the national finalists were invited back to Augusta National to compete in the same age group for which they originally qualified. 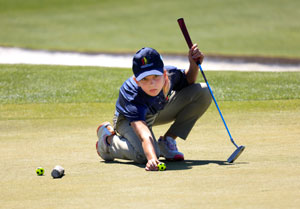 Card took the first discipline of the day with her 205-yard drive, but placed eighth in chipping. She bounced back to sink the 15-footer on the 18th green, however, to win the putt competition and the overall championship in her age group.

When she saw her name atop the leaderboard, she said her mind went blank for a second. “I couldn’t believe it,” she said. “It’s just amazing.”

After winning the chipping discipline and finishing third in driving, Meerdink saw her first putt roll long. She steadied herself, resolving to sink her 15-foot putt attempt and take home the overall first-place trophy.

“After the first putt, I was not happy, but I was just like, ‘Please be within the range to where I still have a chance on the next putt to win,’” said Meerdink. “I just stepped over and kind of lined up and just trusted myself, and it went in the hole.”

She immediately set her sights on bigger goals. “Just to play, it’s very inspiring, and it motivates me to work harder so that one day maybe I’ll be able to play in the Augusta National Women’s Amateur,” she said.

In the other two ages groups, two best friends took the titles in their competitions. Wilson said she and Mulhall “play tournaments together and that’s how we push each other. If one of us beats the other one, we’ll definitely work harder the next time.”

Wilson became a two-time Drive, Chip and Putt National champion, having previously won in 2019. After holing her second attempt during the chipping portion, she was in first place heading to the 18th green. She needed to be within 2’ 8” of the hole to hold onto her lead, and she knocked her second putt safely within that distance to secure the win.

“My main goal here was just to have fun. I mean, you know you’re at Augusta National. It can’t get better than this,” said Wilson. “Except winning.”

An accomplished golfer and 2018 national finalist who in 2020 became the first woman to compete in the Nevada Open, Mulhall started the day off strong. After placing first in the driving and chipping competitions, her third-place finish in the putting discipline gave her the victory.

Mulhall said her second trip to Augusta National felt different. “I think the first year I was more in awe of what was happening and where I was at, and this year I kept my nerves more steady,” she said. “I was able to take it in more and just stay even throughout the whole competition.” 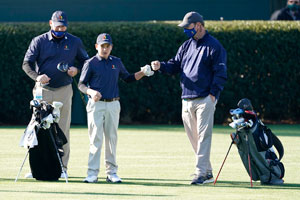 Bernstein took home the overall title with consistent performances throughout the day. After placing third in driving and second in chipping, he kept up the momentum on the 18th green.

“I was a little anxious,” he said. “I’m pretty sure my dad was a little more anxious than I was. But for the most part, before the competition, I was walking, I was calm and chill. But once you got up, and you were in line and you were next, then your adrenaline gets going.”

Barnum, who placed fifth overall at the 2018 Drive, Chip and Putt National Finals, once thought he wasn’t a strong putter. After lots of practice, however, he now loves to putt – and his hard work paid off. He sunk his first putt from 30 feet, and his second attempt from 15 feet stopped just 7 inches from the hole, securing his title as the 2021 national champion in his age group.

“I put a lot of hard work into this, and it’s a privilege to be here at Augusta,” he said.

In his third Drive, Chip and Putt National Finals appearance, Udovich was a dominant competitor. He won the first discipline with a 270-yard drive and triumphed in the chip competition to take a firm lead to the 18th green. Although he placed ninth in putting, his strong start gave him a comfortable margin to claim first place overall in his age group.

“Since I live in Minnesota, I’m practicing in domes, so it gave me an extra year to work on stuff. I practice on artificial grass for putting, so it’s very fast and that kind of helped me on my putting,” Udovich said. “I was here three times, and I think the third time’s the charm.”

Moving into the putting discipline, Pande had a three-point advantage with second-place finishes in driving and chipping. He lined up his putter, needing his 15-foot attempt to be 4’ 8” or closer to win. Instead, he sank the putt to secure the victory with the largest winning margin of the day.

“I knew I had a little bit of a lead going into the putting, and the 30-footer – I saw it got a little quick at the end, so I was able to get that one close,” said Pande. “It was a great experience to be able to make the putt on 18.”

Pande, who grew up playing golf in Nepal with his grandfather on summer holidays, said, “It’s great for him to be able to watch it in Nepal on TV and just see me here at the greatest stage in golf.”

This year’s Drive, Chip and Putt National Finals will be held at Augusta National on Sunday, April 3. Registration for the 2023 championship is underway at drivechipandputt.com, and local qualifiers begin in May at more than 350 sites nationally – the most in the event’s eight-year history – and will continue throughout the summer.