Welcome spring with a kayak tour of local waterways and you just might paddle past ancient shell mounds, glide along beneath osprey and herons, share a snack with wild donkeys and strike a pose at a whale of a boulder.

Don’t ever tell Martinez resident Cole Watkins that there’s nothing to do. Even when – or especially when – activities come to a halt because of a global pandemic.

Watkins, who owns kayak rental and tour business Cole Watkins Tours, had his best year yet in 2020 – despite shutting down operations in March and April due to covid-19.

“We actually doubled our sales from our best year ever,” he says.

He had the first inkling that people were anxious to get on the water in late April when he got a call from Andy Colbert of Outdoor Augusta Riverside to borrow several kayaks. (The two kayak rental companies, along with Savannah Rapids Kayak Rental, often loan each other kayaks when they have reservations for big groups.) “He said, ‘Every day is Saturday,’” Watkins says. 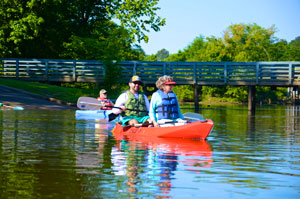 After all, kayaking is a great way to get outside and enjoy nature while social distancing.

In his weekday job, Watkins works as the director of content strategy for Aggressor Adventures. He started CWT 10 years ago as a junior in college when he had a class assignment to build a business from the ground up.

“Kayaking is an easy hobby to pick up, especially on the flat-water routes,” Watkins says. “It’s great for all ages.”

He credits the pandemic and the Serene 18 Paddle Trail with boosting his business last year. Serene 18 is a Columbia County Convention and Visitors Bureau initiative in which paddling enthusiasts can explore 18 square miles on four of Georgia’s most serene water trails – Stallings Island and Betty’s Branch on the Savannah River, the Augusta Canal and Clarks Hill Lake. Paddlers receive a passport, which they get stamped when they finish a route, and earn a free T-shirt after completing all four water trails. 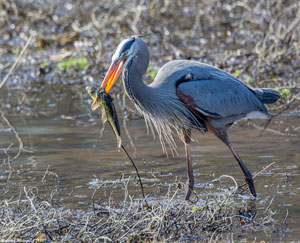 CWT offers kayak rentals and guided tours on four routes – Betty’s Branch, Stallings Island and the Dam Trip on the Savannah River and the Augusta Canal. Single and tandem kayaks are available for rent, and CWT drops off and picks up the vessels. The rentals also include life jackets, paddles and dry packs.

For safety purposes during the pandemic, paddlers must pre-pay over the phone by credit card or with an online payment app. CWT emails waivers to customers so they can print and fill out the forms before their trips. Start times between groups begin at 15-minute intervals, and all of the kayaks and equipment are sanitized at the end of each tour.

On group tours, CWT can accommodate up to 15 paddlers to Stallings Island and up to 25 paddlers on other routes. However, 10 is the average number per tour. A minimum of two people is required for a tour, and paddlers can rent kayaks or bring their own.

“Most of our tours are combined group tours,” Watkins says. “We have beginners’ routes for people who have never been kayaking. If we have combined groups of beginners and experienced paddlers, we will have two guides so we can split the groups if need be.”

One guide per seven people accompanies each group, and CWT has six guides, including Watkins. Before the tours get underway, guides give a brief tutorial on the proper paddle stroke and water placement and correct seating in tandems. Last year CWT did more guided tours than rentals. 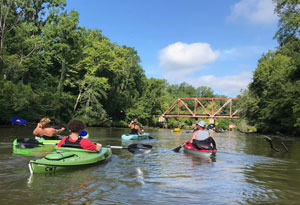 The Trails
Offering beautiful scenery and a good time, the water trails include:

Betty’s Branch:
A Savannah River tributary with minimal current, Betty’s Branch is CWT’s most popular route for rentals. The launch and finish are at the same boat ramp in Riverside Park, so there is no need to carpool or shuttle. It’s a good trail for newbies, and paddlers can choose one of two options on this route.

The first option is to paddle north until kayakers get tired and then return to the boat ramp. This 4-mile route takes about two hours.

The longer 6-mile option around Germany Island takes about 3 1/2 hours to complete. A small sandbar 30 minutes north of the boat ramp is great for picnics. The route is more secluded and shadier on the tributary side than the Savannah River side, and it is best to travel in the morning before water levels rise in the afternoon. 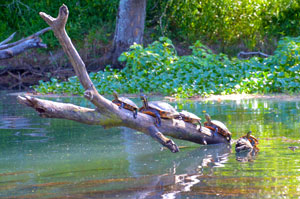 Wildlife is abundant on this water trail. The most common animals along the route are turtles, herons, osprey, deer, hawks, otters, raccoons, owls, beavers and foxes. Lucky paddlers might even spy a boar along the way. The trail also runs through Champions Retreat Golf Club.

Augusta Canal:
With its steady downstream current, the 5-mile Augusta Canal trip is ideal for groups with children. The route starts at Savannah Rapids Pavilion and ends at Lake Olmstead. (For Serene 18 purposes, the trail continues for another 2 miles to downtown Augusta’s 13th Street.) The trip takes 2 to 2 1/2 hours to complete, and swimming is not allowed. CWT does not offer shuttle services, so paddlers need to park a car at Lake Olmstead before meeting at Savannah Rapids.

Stallings Island:
The 2.7-mile Stallings Island tour, which follows a figure eight loop, covers the most secluded section of the Savannah River. This intermediate level, two-hour trip can have a steady current, so it’s best to have a little paddling experience.

“My company is known for the Stallings Island route,” says Watkins. “It’s the most popular trip for guided tours.”

This history-rich route first leads paddlers through a chain of islands referred to as “99 Islands,” some of which are so close together that it feels like paddling through small creeks. Near the South Carolina side, kayakers pass two cypress trees known as the “hissing trees.”

“There’s a 90% chance you’ll see a snake in the trees,” says Watkins. “It’s optional for people to paddle over to them. We always have at least two guides on this route, so the lead guide can take people to the trees and the other one can hang back with everyone else.”

Nonpoisonous river snakes are spotted most commonly, but copperheads and cottonmouths have made an appearance as well. “They barely even move,” Watkins says.

With or without a closeup of the snakes, paddlers continue on Stallings Island, which was identified as an archaeological site in 1861. Designated as a national landmark, the island is maintained by the Archeological Conservancy.

Archaeologists speculate that the Stallings culture originated about 5,000 years ago, and it produced the oldest documented pottery in North America, the first local shell fishing and the region’s first settled communities.

Home to many shell mounds, the island was an apparent gathering spot for Indians who lived, grew crops and died there. A 1929 expedition by Harvard University’s Peabody Museum found 89 burial sites on the island.

“I tell people about Stallings Island, but I don’t want them to feel like they’re in a history class,” says Watkins.

No one is allowed on the island, but that doesn’t stop its current residents – wild donkeys and goats – from greeting visitors on the riverbanks. Guides are helpful because most people don’t know where to find the donkeys or how to get them to the water’s edge.

“I have a distinct whistle to call them,” says Watkins. “People can feed donkeys apples, carrots and veggies out of their hands.”

The goats keep island vegetation under control, he says, and the donkeys protect the goats from coyotes that swim to the site.

His father, Buster, a photogenic donkey that liked humans, was removed from the island last June because of his aggressive behavior toward other donkeys.

“There were reports that Buster bullied two small male donkeys to death, and Abigail was so beat up that she needed medical attention,” Watkins says.

Watkins, Colbert, Savannah Riverkeeper, the Archaeological Conservancy, Veterans for Clean Water and others collaborated to relocate Buster. The group put two life jackets around Buster’s neck and helped him swim about 300 feet between two jon boats connected by a stick to the South Carolina side of the river. A horse trailer was waiting to take him to an animal rescue facility, and Watkins says he has since been adopted by a farm family. (Video of Buster’s removal is posted on Cole Watkins Tours’ Facebook page.)

“It was quite an adventure to get him off the island. It was bittersweet for me. Buster was a baby when I first started going there, and he was like a pet to me,” says Watkins. “Hopefully, Abigail and Buster Jr. will mate to increase the donkey population.”

The eight to 12 goats on the island were led by a horned, black and brown goat called Bruiser until he died in February. Watkins doesn’t recommend feeding the goats because they just might decide to headbutt an unsuspecting guest. However, he says, the goats have become friendlier to people since Buster left.

Once the donkeys have been petted and fed, kayakers proceed to Stevens Creek Dam and a stop at Whale Rock for a photo op before returning to the starting point. “The boulder-sized rock looks like a whale coming out of the water,” says Watkins.

Strom Thurmond Dam:
The 7-mile downstream Dam Trip starts at the bottom of Clarks Hill Lake and ends at Riverside Park. Paddlers enter the Savannah River and get a view of the 1,100-foot wide, 200-foot tall J. Strom Thurmond Dam. Built by the U.S. Army Corps of Engineers between 1946-1954, the dam provides flood control, hydropower and downstream navigation.

While not difficult to navigate, this route is best paddled in the afternoon because of the current. As the longest tour, the water trail takes about four hours to complete.

“We always try to time the route around a dam release so we have current going down. It can feel pretty slow if there’s no current,” Watkins says.

The first half of the trip goes downstream on the main channel, and the second half travels through Betty’s Branch. CWT does not offer shuttle services, so kayakers need to park a car at Riverside Park before meeting at the starting point.

Warm Welcome
Watkins has lots of repeat customers, and he estimates that 40% of his clientele come from other Georgia cities and Southeastern states such as South Carolina, Tennessee and Florida. He also says Serene 18 has attracted a lot of out-of-town visitors.

“I have always enjoyed showing people hobbies that I love. I like to introduce them to the outdoors and kayaking,” says Watkins. “I’m a born and bred Columbia County kid. There’s so much to do here, and I’m always happy to show people everything Columbia County has to offer.”