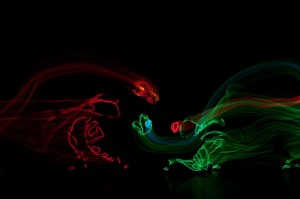 “Lightwire Theater – Dino-Light” is a child friendly ballet, which features giant puppets that are illuminated by neon-colored wires on a darkened stage. The original show tells the story of Professor Henslow, a famous scientist with magical powers who creates a wild and primitive dinosaur in his workshop. The two become separated, and Dino meets many creatures – a carnivorous tyrannosaurus, a pair of friendly long-necked birds and a school of fish – when the pair tries to reunite. Along the way, Dino learns something new about himself and the world around him as well as the true meaning of love.

Lightwire Theater made it to the semi-finals of Season 7 of “America’s Got Talent,” and you have to see it to believe it. Tickets to the Friday, October 10 performance are $28.50 for adults and $14.50 for children under age 16.

On Saturday, October 11, Al Pierson and Guy Lombardo’s Royal Canadians – the longest-running dance orchestra in the world – will delight the audience with its big band sound. The original orchestra floundered for more than a decade after Lombardo’s death in 1977, but Pierson took over the legendary band in 1989. Tickets are $35 and $40.

The Count Basie Orchestra – “The Swingingest Band in All the Land” – will perform on Friday, October 24. The elite jazz band has won 17 Grammy Awards and 20 Downbeat and Jazz Times polls, more than any other big band in jazz. Tickets are $49 and $54.