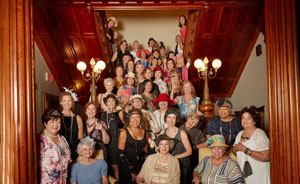 Devoted followers of “Downton Abbey,” a British historical drama that ran on PBS from 2010 to 2015, eagerly awaited the September opening of the movie of the same name. These avid fans included a group of about 50 local ladies that saw the premiere together with reserved seating at Riverwatch Cinemas.

Making an event of the premiere, they dressed in period clothing for a pre-movie champagne brunch at Rosemary Inn Bed & Breakfast in North Augusta before heading to the theater.

Susan Salisbury of Evans organized the party for members of the Augusta Area Newcomers Club movie group and personal friends.

“I wanted everyone to have a happy day, go see a movie that we all like together, and then discuss it afterward,” she said. 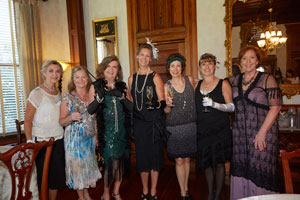 A devoted “Downton Abbey” fan, Susan has visited Highclere Castle, the English estate where the “Downton Abbey” series and movie were filmed and, in real life, is the home of the Eighth Earl and Countess of Carnarvon.

The TV drama depicted the Crawley family, wealthy owners of a large estate in the English countryside in the early 20th century, and their servants. The film is set in 1927, slightly more than a year after the series finale takes place, and it features a royal visit to Downton Abbey by King George V and Queen Mary.

And stepping into Rosemary Inn was like touring the movie set – or Downton Abbey itself.

“This is the perfect house for a festive celebration like this,” said Diana Combs, who owns Rosemary Inn with her husband, Kelly. “A lot of people equate it with ‘Downton Abbey.’ They say it is the Downton Abbey of the South.”

The ladies wandered through the bed and breakfast, where “Downton Abbey” books and CDs, as well as a Life magazine with some of the show’s characters on the cover, were displayed. Period music played in the background on a player piano.

Evans resident Thelma Gilchrist, looking divine in a black dress, black shawl, elegant fingerless black gloves and black feathered flapper headpiece, snapped photos of the guestrooms on her cell phone. She says she recognized one of the bedrooms from a reality TV show.

In addition to dressing for the part, the women brought homemade dishes for the luncheon. Some of the recipes came from the cookbook, Downton Abbey Cooks. 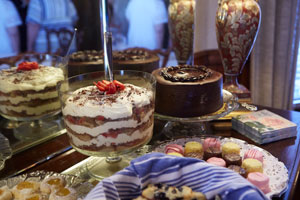 Prizes were awarded for Most Authentic Dish, Most Beautiful Dish, Best Presentation and Best Costume. The winners received scented soaps.

Lynn Pawlak of Evans won the prize for Most Authentic Dish with her Queen Mary’s cake, a génoise with chocolate frosting, from a recipe that has been in the royal family for generations. Susan LaFrance of Martinez won the Most Beautiful Dish award for the tiramisu, and Martinez resident Betty Sneed won the Best Presentation prize for the pineapple fruit tray.

Dressed to Impress
Martinez resident Fran Weber, one of two winners of the Best Costume contest along with Phyllis Harvey of Martinez, ordered her blush-colored, fringed dress from Amazon. She accented it with a strand of long pearls and a matching headpiece. 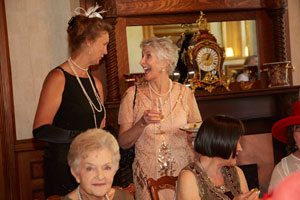 Phyllis wore a gold-sequined chemise with maroon jewels. “I got the dress a long time ago at a consignment store in Santa Barbara when I was looking for a costume,” she said.

A devoted “Downton Abbey” fan, Phyllis, who splits her time between Martinez and Santa Barbara, was attending a Newcomers event for the first time.

“I thought the party was amazing. I couldn’t believe how well they put it together. I look forward to more outings with the Newcomers,” she says. “The facility was beautiful. It was so fun to go through the house and look at the antiques. I love that era.”

Evans resident Lottie Gilchrist, who had been binge-watching the show for the past couple of months, found a dress in her closet for the occasion.

“I already had this dress. I look like the dowager, but that’s OK. It’s a good excuse to get dressed up,” she says. 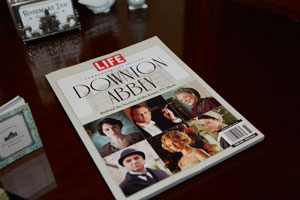 “The gloves are my daughter’s gloves from Social, and I made the dress for her for AP history class when she was in high school,” said Pat, who bought the dress at Goodwill and added the fringe. “The headband is actually a necklace, and the hose are $5 from Target.”

She also is a big fan of “Downton Abbey.” “I love the show and the everyday drama of the characters and the upstairs, downstairs part of it,” said Pat, referring to lives of the aristocratic characters and their household servants who work at the estate.

Teresa McVeigh of Augusta never had seen the TV show, but that didn’t stop her from enjoying the festivities.

“I’m an Anglophile. I lived in England for a year,” she said. “I might have to go back and watch the show now.”

Carole Steffes of Evans didn’t know much about “Downton Abbey” either, but she certainly dressed the part. Her 1920s outfit included antique Black Jet mourning jewelry that had belonged to her great-aunt Kate, who was her grandmother’s sister.

Regardless of their familiarity with the show, the ladies enjoyed stepping back in time for a special occasion.

“This gives us an opportunity to channel our own ancestors,” said Susan. “You can tell it makes people so happy. We need these positive moments in our lives. It came from the heart. It makes me happy, but obviously, I’m not alone.”