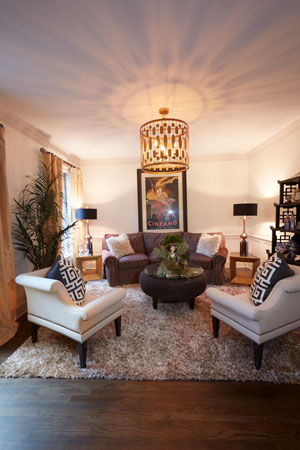 The Jones Creek Plantation home of Michael Siewert and Justin Resley is so strategically laid out that it’s hard to imagine it any other way. However, the sitting room once was the dining room, the living room became the dining room, the kitchen used to be a porch and the small foyer to the master bedroom started out as a bath.

And that fabulous shoe wall in the master bedroom closet? Well, it didn’t even exist when they moved into the Evans house in 2005.

Michael, who owns Signature Interiors & Gifts, and Justin, a cardiovascular perfusionist at University Hospital, have done extensive renovations to the house where they like to unwind after work or entertain with ease.

Employing his construction and design talents, Michael, who created and did many of the renovations himself, approaches the interior décor of their home the same way he does the house of a client.

“I like for my clients to show me a space and tell me how they’re going to use it, and then I can fix the problem,” he says.

Raise the Bar
A stroll down the main corridor of the home offers a nod to their travels, where Chinese terracotta soldiers stand guard, a Cirque du Soleil-inspired half bath adds whimsy and entry into a Louisville bourbon bar beckons. 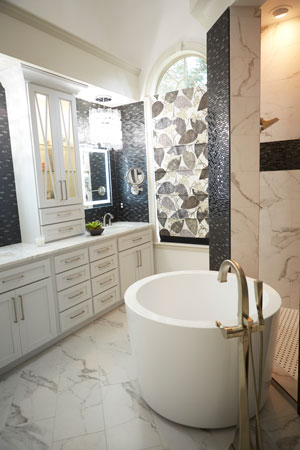 Michael also put his building skills to work in the hallway, where he constructed individual wall niches for the terracotta soldiers. They purchased the figures on a trip to Xian, China, where the famed warriors are interred, before traveling on to Thailand several years ago when Justin gave a medical presentation there.

For the half bath, they adopted a Cirque du Soleil theme, featuring a funky chandelier and black-and-white wallpaper, after seeing a show by the high-flying performers in Las Vegas.

The Louisville bourbon bar, formerly the laundry room, features memorabilia that pays homage to Michael’s Kentucky hometown. Although he has a preference for white walls, the red walls in the bar create a different vibe.

“I wanted a dark, smoky bar,” says Michael, who once worked in a bar in Louisville. 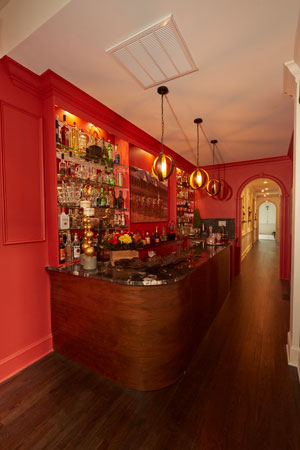 Colorful giclée prints of Muhammad Ali and the Kentucky Derby hang on one wall. On the opposite wall, four black and white prints depict a map of Kentucky and three Louisville landmarks – the Belle of Louisville steamboat, the Louisville Slugger Museum & Factory and the John F. Kennedy Memorial Bridge, which crosses the Ohio River into Jeffersonville, Indiana.

The wet bar also features a granite countertop, a hammered brass sink, a wine fridge and an icemaker.

Pops of Color
Steps just beyond the bar lead down to the sunken living room, which features white walls. “As a designer, I enjoy having white walls. It gives me a neutral palette to work off of,” says Michael. “I like clean, white walls from one room to the next because they reflect the light. I’m all about light reflecting in room to room, whether I’m working with fabrics or furniture.”

He calls a trio of abstract prints, which are spotlighted by wall-mounted lamps, “the inspiration for the room.”

“I love this artwork,” says Michael. “I liked the variety of colors that I could play with. It was simple to create a palette around that artwork. It’s black and white with pops of color.”

The colorful palette in the living room includes a pair of orange lacquered tables behind white leather couches with footrests and headrests, which create a theater-like experience to watch movies.

A remote controlled-screen lowers down in front of a large silverleaf fiberglass sculpture that hangs in a lighted wall nook. To enhance the movie viewing experience, Michael made blackout window treatments, featuring sequined fabric, for the living room as well. 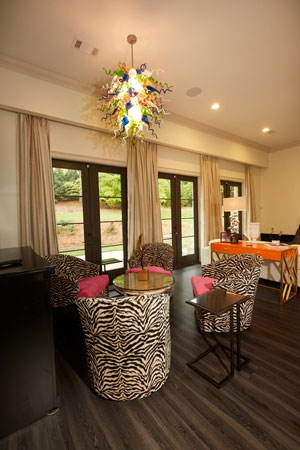 Upholstered chairs with zebra-print backs and hot pink cushions surround a table, which is great for playing cards, in a corner of the room. A faux Chihuly blown-glass chandelier hangs above the table, and the seating area includes a small TV as well.

“It’s a perfect Masters house because there are lots of little gathering spaces,” says Justin.

Another nice Masters rental feature is the addition of a pool house that includes private living quarters with a full kitchen and bath. Connected to the main house, the addition also houses the laundry room, a sewing room and an “outdoor room” that shares a see-through, wood-burning fireplace with the pool.

“We spend a lot of time out here in the winter,” Justin says of the outdoor room. “It’s nice with the see-through fireplace.” 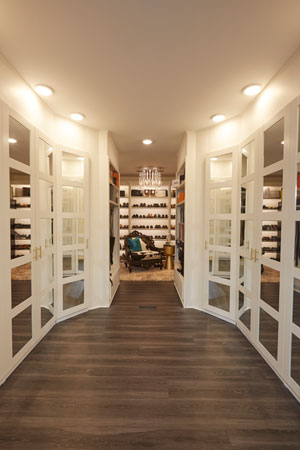 Suite Spot
As part of the renovations, they also created a buffer between the master bedroom and the main corridor. The room originally opened directly into the hallway, but they turned the adjoining bath into a small foyer that leads into the master suite instead.

In the master bedroom, Justin says, the bed did not fit properly between the two windows. To solve that dilemma, Michael made hotel-style blackout draperies to cover the wall.

The bedroom also features hardwood flooring with an ebony stain. The stars of the suite, however, are the expanded walk-in closet and the new master bath. As part of the renovations, Michael broke out the openings to the spaces and did the door framing himself.

For entry into the spacious closet, they took out a small single door and replaced it with double doors into the space that resembles an upscale clothing boutique. Belts hang tidily from hooks on one side, and ties hang just as neatly on the other side. Their dressers are in the closet, and Michael’s collection of shoes is lined up on shelves along the back wall.

In fact, Michael calls the closet his favorite spot in the house.

“I say that because of my shoe wall,” he says. “I had shoes from the Salvation Army when I was growing up. When I look at 100 pairs of designer shoes, it just sends a message to me that I’m OK.”

In the master bath, they built a water closet in the space that the shower occupied and replaced a garden tub with a new tile, walk-around shower. A Japanese soaking tub is situated in front of the shower.

The bath also features a two-story trey ceiling, porcelain tile flooring and chandeliers above the vanities. 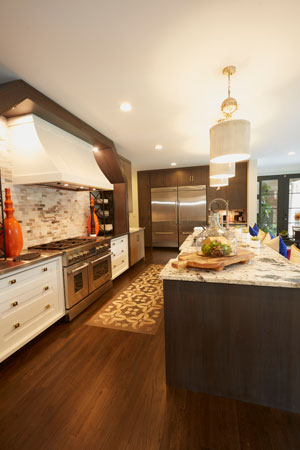 The Kitchen is Open
The kitchen underwent major renovations as well. Originally, the house had a galley kitchen. For two people who love to entertain, however, a much bigger space was in order, so they enlarged the kitchen and extended the space to the pool.

“I wanted this look in the kitchen, but we were never going to get it with the footprint we had,” says Justin. “The whole idea behind the addition was to have a gourmet kitchen and to connect our pool use to our main house so we would have one contiguous space.”

The kitchen features a galley sink with accessories that include solid cutting boards, a board with a hole cut for a colander and a drain rack. “We can do all the cooking in one space,” Justin says.

The room also has a full dishwasher and a drawer dishwasher (there’s a third dishwasher in the pool house), a vegetable sink, a microwave with a warming drawer underneath, spice rack pullouts by the stovetop, a pot filler, a tile backsplash with a basketweave pattern and open shelving.

“We wanted a restaurant feel with open shelving,” Justin says.

To add versatility to the adjoining breakfast area, the space includes two rounds tables that can crank up to double as cocktail tables and built-in, upholstered banquette seating.

“It’s a great place for people to gather whether it’s just the two of us or we’re having a fundraiser for 200 people,” says Michael.

Overlooking the pool, three sets of full-length windows were designed to look like doors. 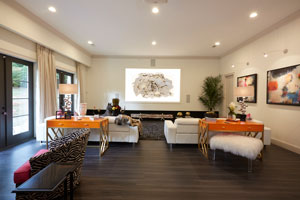 Neutral Territory
The adjoining dining room features a stacked stone fireplace, and Michael put up all of the stone himself. Built-ins flank either side of the fireplace, and oversized blue and white ginger jars and vases line the top shelves. White columns extend above the fireplace to the two-story ceiling, where a beaded chandelier hangs above the large, round pedestal table.

“The table was mahogany, but we refinished it to be a little more neutral in that space,” says Michael. “With all the color in the living room, we wanted the dining room to be neutral. It allows you to pop color in certain rooms, and it draws your eye into that space.”

In front of each upholstered chair sits a quirky, colorful canvas featuring an animal such as a cat, dog, pig, deer, chipmunk or squirrel. A porcelain animal sculpture candelabra serves as the centerpiece.

“So many dining rooms can get boring and stuffy,” Michael says. “I wanted something fun.”

“With neutrals, you can pull in metallics. They reflect light and color,” says Michael. “I think it brightens up a room.”

The sitting room furnishings include a studded couch, a round wicker coffee table with a glass top and cube-shaped end tables with mirrored tops. Michael made the silk draperies for the window and the arched entryway into the room. On a pagoda etagere, they have an engraving of the Great Wall of China, which they visited during their trip.

Another memento on display is a photo of Michael, who once owned the world’s largest collection of Judy Garland memorabilia, with the late Karl Slover, one of the Munchkins in The Wizard of Oz. Slover was a guest at their home several years ago when he was 92 years old. 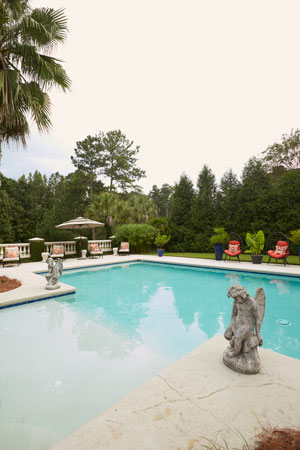 In Good Hands
Justin has a passion for growing things, an interest that blossomed during his childhood weekends and summers at his grandparents’ farm and ranch near his hometown of El Paso, Texas. And it shows in the Evans home.

He planted all of the trees, including the palm trees in the front yard and in the pool area, and the creeping fig on the garage and the front steps. He also planted a row of fast-growing, disease-resistant Green Giant arborvitae trees alongside the pool area.

“My favorite part of living here is that our home is very private,” says Justin, who also plays the cello for Augusta Symphony.

He started playing the instrument in the fifth grade, thanks to those music education company types that visit elementary schools. Both of his grandmothers played the fiddler, so he had his heart set on playing the violin. However, no one had selected the cello, and the observant music representative recruited Justin to play it.

Michael designed the pool, which includes a sun shelf for lounge chairs, hot tub and stamped concrete surround, with a resort ambiance in mind. He also designed the balustrade around the area. An Atlanta company made the cement pieces, and they brought them back by U-Haul and put them together themselves.

Justin’s green thumb also is on full display in the Charleston courtyard, where staghorn ferns and bromeliads fill orchid boxes mounted on the brick walls of the house and the garage.

An open-air porch between the pool and the courtyard features an overhang ceiling with wood paneling.

“The builder originally wanted the house to be a Charleston home with a narrow side porch,” says Justin. “If the side porch is open, it means ‘We’re accepting visitors.’ If it’s closed, we’re not.”

Suffice it to say, no wonder the side porch at this house is open permanently by design.