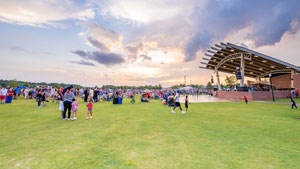 As you, no doubt, know by now, Money magazine has discovered something we knew all along. Evans is a great place to live. In its October issue, Money ranked Evans No. 1 on its annual list of 50 Best Places to Live in the nation.

To create its list, the magazine looked at cities and towns with a population of at least 25,000. It eliminated any place that had more than double the national crime risk, a median income level lower than 85% of its state’s median, or little to no ethnic diversity.

However, the magazine primarily emphasized cost of living. Of all the U.S. towns and cities Money looked at this year, Evans had the lowest cost of living of any place with similarly high income levels.

In addition, despite the pandemic, unemployment in the area was just 5.2% in June, which was below the 7.6% average for Georgia and less than half the national average of 11.1%.

The county Parks, Recreation and Events Department has scored an accolade as well. The National Alliance for Youth Sports has designated it as a Better Sports for Kids Quality Program Provider.

Augusta also has been designated as the “Most Neighborly City in America” by Neighbor.com.

To determine the top neighborly cities, the website created a scorecard based on criteria such as charitable giving, volunteering and whether or not residents feel happy, safe and proud of their communities.