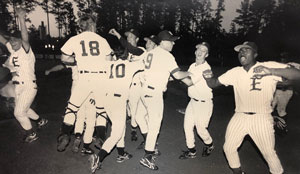 In the near darkness, Evans players celebrate their win.

Winning has been a habit for Evans High School baseball teams through the years, and this month marks the 25th anniversary of the Knights’ 1994 Georgia AAAA baseball championship.

The Knights were defending the title they had captured the previous year in a 17-inning Game 2 thriller against Sprayberry High School, and they defeated the Fayette County High School Tigers with a flair for the dramatic as well.

After the teams split the first two games of the three-game series in Fayetteville, the stage was set for the decisive Game 3 at 4 p.m. on May 21. The late afternoon start time avoided the heat of the day, but it allowed for little wiggle room in the event of inclement weather.

Through four innings of Game 3, the teams matched each other run for run. Clint Sauls’ home run to right centerfield in the top half of the fifth inning put Evans ahead, 5-4. Within seconds, though, the weather in Fayetteville went from pleasant spring afternoon to a surreal combination of high winds and swirling cement mix. 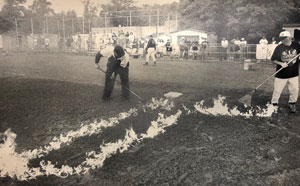 er rains thoroughly soaked the field, the Fayette County coaches, players and fans set the field on fire in order to make it dry enough to continue play.

A quarry-like factory located over the left-field fence housed a long, high mound of the cement mix. The windstorm that roared in from over the fence brought with it a powdery cloud of blinding, choking, sand and stone and who-knows-what-else to the baseball diamond.

As television camera crews rappelled off a media platform that overlooked the outfield fence and fans fled for cover, I urged Channel 6 photographer Keith Brown to remain aboard the swaying wooden structure and capture the scene on video.

You can’t imagine that the game continued in those conditions, even momentarily. If the raging sandstorm wasn’t enough, the rainstorm that followed forced a two-hour game delay.

By the time the storm hit, enough of the contest had already been played to render it official in the books. Evans would be declared the state champion if the game could not be completed in its entirety. Whatever hopes Fayette County held for winning a state championship were quickly running out.

More than an hour later, when the rain stopped, the infield was saturated, compounded by puddles of standing water. The dark clouds that hung over Fayetteville were also not in their favor. 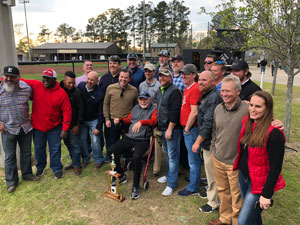 The Evans Knights held a 25th anniversary reunion last April to celebrate the state championship baseball teams from 1993 and 1994. Teammates from shroughout the United States attended a weekend celebration.

In an attempt to hasten the drying process, the Fayette County faithful poured gasoline on the drenched infield and fed it with matchsticks.

To quote a few lines from the Channel 6 television report for the 11 o’clock news that night, “trouble is, the field is a mess, it’s going to get dark and there aren’t any lights here. You get the picture. Desperate men will do desperate things.”

The soggy field was deemed playable as darkness crept in, and the ballgame resumed. In the bottom of the sixth inning, local legend Keith Brownlee, the second man up for the Tigers, launched a home run over the left-field fence to tie the game at 5.

As the Fayette County fans erupted in jubilation, Brownlee slowly trotted around the bases, enough time for Evans scorekeeper Amanda Eckert to get coach Terry Holder’s attention and question who had batted.

The pen proved mightier than the sword that night. After a 15-minute delay to sort things out, the umpires ruled that Fayette County had batted out of order and took the run off the scoreboard. The Tigers appealed in vain that the umpires made an error on their lineup cards earlier in the contest.

A stunned Fayette County team got in its final at-bat as nighttime descended on Fayetteville, and the game was called due to darkness with Evans in the lead, 5-4. The Knights carried off their fifth state championship trophy in seven years.

After the game, a gracious Holder remarked, “I feel sorry for their team… it was just a mistake in the heat of the battle, so to speak. This time it went our way, and so I’m proud for our kids.”

The video even made its way to CNN and ESPN, and living rooms throughout America reveled in the story. The Environmental Protection Agency also caught a glimpse of the video and the baseball field at Fayette County was cordoned off. The playing surface had been exposed to hazardous material and would need to be dug up.

In the record books, the Knights won back-to-back titles, and the report won the Associated Press TV Sports Report of 1994 in Georgia.