A new era of entertainment in Columbia County has begun with the opening of the Performing Arts Center.

The center of it all.

That’s the tagline for Columbia County’s newly opened Performing Arts Center, which anchors one end of The Plaza at Evans Towne Center, the walkable, multi-use downtown area in the heart of Columbia County.

“This will kick-start the downtown area,” Matt Jameson, the PAC general manager, said days before the facility opened. “We really feel that this is the center of it all.” 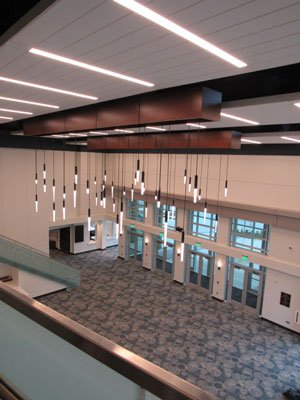 Doug Duncan, chairman of the county Board of Commissioners, echoed those sentiments at a May 14 ribbon cutting ceremony for the PAC.

Ron Cross, the former Board of Commissioners chairman who had the vision for the PAC, cut the ribbon at the ceremony. Cross served 16 years as the board’s first countywide elected chairman from 2002 to 2018, and he presided over the groundbreaking ceremony for the building in February 2018.

“I had cautious optimism that this would all come to pass,” he said after the ceremony.

Cross steered the public-private partnership to build a Columbia County “downtown” in unincorporated Evans, and the development first got underway in 2003 when the county acquired land from Doctors Hospital to construct Evans Towne Center Park. 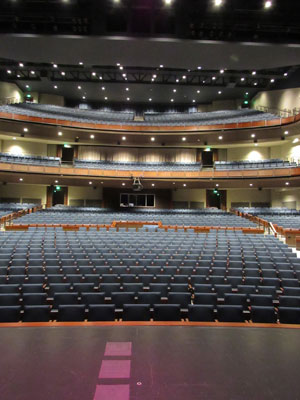 “It’s been a continuous vision of what you’d like to see for the community. The citizens have been so supportive,” said Cross.

Some of those citizens came to the ribbon cutting ceremony, and they had the opportunity to tour the building.

“We wanted to see the opening of the center and see what it looks like inside. It’s great. Everything is beautiful. We won’t have to worry about traveling downtown to see any shows. It’s good to have something close by,” said Evans resident Harvey Rogers, who came to the ribbon cutting with his wife, Christine. “This is just the beginning. I think it’s great for the community – the elderly as well as the young. It’s something everyone will enjoy. It helps with employment. This year has been rough, and it will be good to get everything going again.”

“I live right across the street in Camelot, and I can’t believe this is right in my neighborhood,” Schroeder said. “We can’t believe how the arts have exploded here. This is for the state. People will come here from all over.”

That’s just what Columbia County officials had in mind.

“I think it’s a regional draw,” said Scott Johnson, the county manager. “Our draw is going to be much larger than Columbia County.” 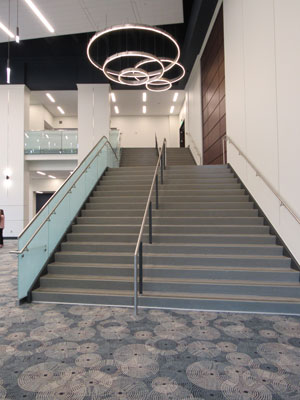 The 85,000-square-foot, state-of-the-art facility includes the three-level theater, which is named the Ron C. Cross Theater; 2,100 seats; a backstage area with dressing rooms and a green room; two balcony areas with box seats that are available for yearly purchase; a concessions area and an orchestra pit that can be lowered below the floor to accommodate extra seating.

The first and second concourses offer a view of Evans Towne Center Park. In addition, event space for parties and other celebrations is available in the PAC’s two-level lobby, multi-purpose room and museum gallery with an adjacent fenced-in patio. The museum also will feature rotating art exhibits as well as a historical display of Columbia County artifacts.

“The corridors on the side are wide enough to gather pre- and post-show,” Johnson added.

The county has partnered with the Nederlander Organization, a New York City-based operator of live theaters, to book shows. However, an Evans dance company, Stephanie’s Dancers, held the first performance in the new PAC on May 15.

“This facility was built to be a performing arts center for Broadway shows, but it’s also for the community,” said Johnson. “I think it’s very fitting that we’re opening up the facility with a local dance group.”

The county expects to announce the upcoming Broadway season at the PAC in July. The season most likely will start in October and run through April, said Jameson, who already is getting calls for bookings for the 2022-23 season.

The PAC can accommodate a variety of entertainment genres including concerts, comedians, rock ’n’ roll, ballets, symphonies and children’s programming.

Construction of the PAC began in the spring of 2018, and the center was built on budget at just under $40 million. The building was financed by 2017-22 SPLOST monies as well as a general obligation bond that voters approved in 2016. The facility originally was slated to open in January, but Johnson says supply shortages due to covid slowed construction.