This Appling couple used their talents, TLC and natural resources on their 35-acre property to restore a family farmhouse

Nothing speaks as eloquently about times gone by as a family farm, childhood memories and the American West.

And a remodeled Appling farmhouse, originally built in 1936, brings these hallmarks of yesteryear unequivocally into the present thanks to the sweat equity of Mary and Jay Menger. Three years ago, the Mengers started renovating the house, which once belonged to Jay’s maternal grandparents, K.R. Smith and Ethel Newby Smith. 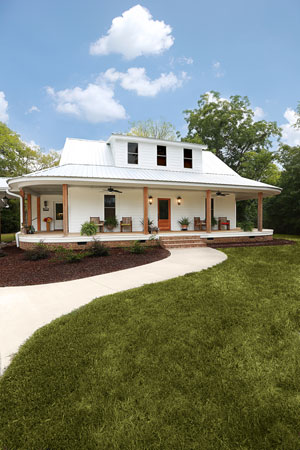 Although Jay’s mother never lived in the house (she was in college when her family moved in after their previous home on the same road burned down), he welcomed the chance to reconnect with his family roots. His grandparents raised cattle on the farm and grew cotton, corn, beans, watermelon, cantaloupe, potatoes, onions, peas, apples and peaches.

Not only did the Smiths feed their own family with their bounty – they spread it to others as well. Pet Dairy Company bought milk from them, Jay says, and Tracy-Luckey Company in Harlem bought pecans from them.

The house had been passed down to Jay’s uncle, and after being abandoned for 10 to 12 years, it had fallen into a state of disrepair. The Mengers, who lived in Broomfield, Colorado for 34 years, finally acquired the house in 2015 and started renovating it in October of that year. They moved into the home in February 2017.

First, however, they had to clear the overgrown 35-acre property. “I told Mary, ‘I’m going in there. If I don’t come out, send somebody after me,’” Jay says.

Fortunately, he emerged from the overgrowth unscathed, and fueled by childhood mementoes and Western memorabilia, they started leaving their own imprint on the family home. 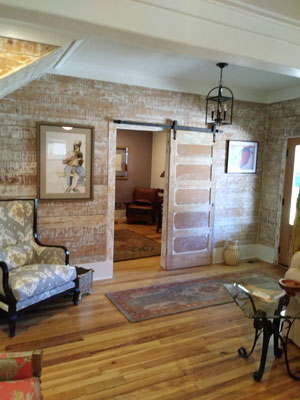 All About Balance
The original house was shaped like a square box and had a tin roof. “It was a livable structure,” says Jay, who grew up in Columbia County.

The Mengers, who did home renovations in Colorado for 30 years, did all of the visible upgrades to the home. Jay also performed work that doesn’t show, such as the plumbing and some of the electrical work. They replaced the roof, siding and HVAC system. The Mengers retained the exterior heart pine siding and used that wood to make all of the interior cabinets. They removed the front porch and rebuilt it, extending it to wrap around the house, and they moved the front door three inches.

“I like for things to either be way off or perfectly straight,” says Mary. “I was born in September. I’m a Virgo. I like balance.”

She gets no argument about her preferences from Jay. “I have moved a light switch a quarter-inch for her,” he says.

They also rebuilt the back porch, where a family of buzzards had taken up residence when they first got the house. “We let them raise their family there and then check out,” says Mary. “They didn’t build a nest. They just laid the egg right on the floor.”

Inside, all of the flooring is original except in the dining room and kitchen. The master bedroom and living room walls are original, and the Mengers also kept as many of the shiplap walls as they could. They took out some walls as well. “Everywhere you see a beam, there was a wall,” says Jay. “We just totally opened it up.”

All of the wood columns in the house are made of beetle-killed lodgepole pines that they brought back from Colorado.

“Where we removed the walls, we put the logs from Colorado,” says Mary. “We didn’t build this house to be real hotsy-totsy Southern because it wasn’t like that.” 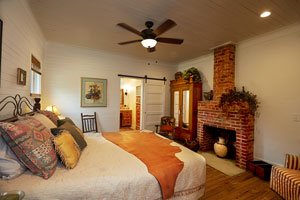 The house has five fireplaces. A three-sided fireplace opens into the living room, dining area and kitchen. There are two back-to-back fireplaces in the master bedroom and the parlor, which the Mengers call the “chair room.”

“When we moved our furniture in here, they put all the chairs in that room so ‘chair room’ stuck,” says Jay.

A lot of their furniture and artwork has a Southwestern influence. Much of their western art is by Frank Howell and Amanda Pena. “By living in Colorado, you end up with a Southwestern/Indian-type of thought process,” says Jay.

Global Influence
The living room features the original walls and the original heart pine floor, but the furnishings and décor are a striking mix of old and new.

The curio cabinet is the first piece of furniture that Mary and Jay bought when they got married. Mary made the vase, which won first prize at the South Carolina State Fair and the Augusta Exchange Club Fair, in the curio. Southwestern artifacts in the display case include small pieces of Santa Clara pottery and a wood carving of an Indian. The Mengers bought the wood carving in Taos, New Mexico from an Indian who carved it out of a single piece of cottonwood. ‘He’s a bean counter,” says Jay. “He looked over the crops.” 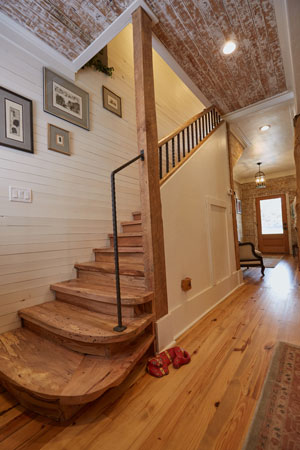 A lamp in the living room is perched behind the couch on one of six logs they brought back from Colorado. The TV is on an old card table that belonged to Mary’s aunt. They found an upholstered chair in a house near a downtown Augusta neighborhood. “I pick up a lot of stuff on the side of the road and in junk shops,” says Mary.

“When we went someplace, we didn’t buy keychains and T-shirts,” Mary says.

They bought their large Mexican dining room table, which was in Jay’s conference room in his former real estate office, in Colorado.

The glass front bookcase belonged to Mary’s father. “Her dad was a minister, and that’s where he kept all his books,” says Jay. “I married the preacher’s daughter.”

“That’s right,” Mary, who grew up in Cayce, South Carolina, says without missing a beat. “He’s the guy that had the most fun.”

They found the Gustaf Stickley chair, which has vertical back slats, in the dining room at a Habitat for Humanity in the Colorado mountains just after it arrived. 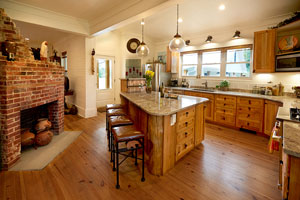 ‘It Just Happened’
The existing kitchen was four feet, and the Mengers extended it to 10 feet. “We did it so when we wrapped the porch around the house, it would fit,” says Jay.

The Mengers used cast iron knobs for their kitchen hardware, and the knobs sit atop small tabs of leather. “We used the leather tabs for pulls while the knobs were on order, and then we left them there because we liked them,” says Jay.

The stove features a tempered glass and stainless steel hood, and Mary covered the island stools with leather.

“I don’t know what to say about the kitchen other than it just happened,” Mary says.

The cabinets in the master bath are made of the original siding, and a friend in Colorado made the mirror frame out of lodgepole pine. The bath features a tile shower, which also includes a band of decorative tile. A sliding pocket door leads to the walk-in closet off the master bath, which includes and a washer and dryer and a chandelier. “That’s my bling,” says Mary.

The powder room door once was a mirror. The room also features a granite countertop and a hammered copper sink. The wall, where they left some of the original paint, came from the outside of the house.

“The house originally had no bathrooms and not much of a kitchen,” says Jay. “I used to say the old bathrooms were ‘40 yards and a hurry out back.’” 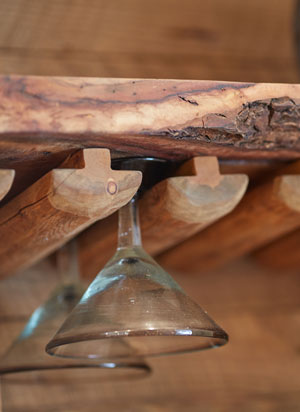 Reuse and Repurpose
The furnishings in the master bedroom are a mix of family heirlooms and roadside finds. The striped chair had been in Jay’s mother’s bedroom. One of the bedside tables once was a record cabinet that Mary refinished when she was 12 years old, and the other was a cabinet that had belonged to Jay’s great-grandmother. They found the rocking chair on a Colorado roadside.

Mary had had the leather hide spread across the bed for 40 years. “Jay pulled it out of a storage box and put it on the bed,” says Mary. “I liked it.”

She got the piece of leather from Trooper Inc., a military garment manufacturing plant on Gordon Highway where Mary once worked as a pattern maker.

They found the bed at an outlet store in the town of North, South Carolina, and the wardrobe came from a junk store on Aiken-Augusta Highway. Mary made the bedspread and pillows.

They added two bedrooms and baths to the unfinished upstairs. First, of course, they had to build the stairs out of two pecan trees they cut down in the yard. The ironwork on the stairs also is handmade.

They made the two desks in the upstairs bedrooms from the siding on the house. Mary did the batik of a lion hanging on a wall in one of the bedrooms. The second bedroom features a metal and wood sleigh bed and an armoire that belonged to Mary’s grandmother.

She made the mirror in one of the baths out of a boat steering wheel, knocking off the handles and covering it with leather. The bathroom has a clear vessel sink and granite countertops. The other bath features a brick wall, a tile shower and a metal mirror. “We tried to keep all the chimneys we could,” says Mary.

The sitting area upstairs feature a trio of attached opera seats – Nos. 9, 10 and 11 – that they found in a Thomson antique store.

“We like to reuse and repurpose as much as we can,” Mary says.