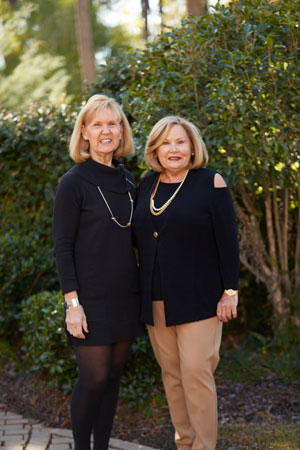 Two area sisters who were separated for 65 years formed an instant, lasting, unbreakable bond when they finally met

It’s never too late to build strong family relationships. Just ask sisters Debi Drummond, 66, of North Augusta and Barbara Hudson, 71, of Augusta. Until May of 2018, they had no idea each other even existed. For the last 20 months, however, they have been making up for lost time.

“My story began in North Augusta, South Carolina,” says Debi, when she and Barbara shared their story with a group at Wesley United Methodist Church. “God’s impeccable timing and love has brought us together.”

For 65 years however, they grew up in different families and lived separate lives. Debi was adopted at birth in 1953 by a North Augusta couple and grew up with an older brother, who was their parents’ biological child. Her adoptive parents, Jerry and Helen Baxter, had been told that Debi was one of eight or nine children whose family could not afford to keep her.

Barbara, who was born in 1948, was raised in Augusta as an only child. “In 1953, my mother was pregnant. She also was in the midst of a divorce,” says Barbara, whose mother remarried in 1957.

They think Debi was taken from their mother for adoption by a local juvenile court officer, Bee Hamilton, who died in 1988. Hamilton reportedly sold hundreds of babies to adoptive parents from the late 1930s until the mid-1960s.

“Bee Hamilton was powerful and well-respected in the community,” says Debi. “She had connections with unwed mother homes. She preyed on low-income, low-education people.”

Allegedly, Hamilton often told birth mothers that their babies had died and asked the adoptive parents to pay the baby’s hospital bills. The sisters believe these were the circumstances that led to Debi’s adoption.

Before her mother, Betty Perry, died in 2004, Barbara saw a page in the family Bible that listed the births in the family. She saw her name, her cousins’ names and their birthdates. She also saw an unfamiliar name – Beverly Kay Perry, who was born May 10, 1953 and died in 1953.

“My mom said, ‘That was a baby I had, but they told me she died,’” says Barbara.

Because her mother was terminally ill, Barbara, who was living in Jupiter, Florida at the time, didn’t ask any questions. However, she told a close friend and a cousin what she had seen.

“My cousin sent me a link about a black market baby ring in Augusta and said, ‘What if?’” Barbara says.

The “what if” began to turn to reality after the younger of Debi’s two daughters, Kim, submitted a DNA sample to find answers and solace for her mother. Debi had fallen into depression when she lost her husband, Andy, in January 2014 after a brief illness and her parents died a week apart 20 months later.

Before Kim submitted her DNA for testing, however, the kit sat on her dresser for eight months. “She did it behind the scenes. I didn’t know it,” Debi says.

After she got the results from her DNA sample, Kim connected with Barbara’s second cousin in Dallas and he recommended that she contact his cousin – Barbara’s uncle Billy, who was her mother’s brother – in Evans.

After talking to Kim, Billy called Barbara and told her that a young lady had contacted him and told him that she thought her mother was Barbara’s sister. He asked Barbara to meet with Kim, and they talked on Memorial Day of 2018.

Kim, who lives in the area, and her sister, Keli, who lives in Knoxville, Tennessee, came to Debi’s house that night, and they told their mother they had something to tell her.

Her response was immediate. “I said, ‘Call them right now. I’ve been waiting 65 years,’” she says.

Barbara arrived at Debi’s house about 9 p.m., and she stayed until 2 a.m. “We bonded right away,” says Barbara, who has one daughter named Ashley.

Debi agrees. “Not only was there an instant bond between us. It has extended to our daughters and all the way down to our grandchildren,” she says.

Debi is a grandmother of six, and Barbara has three granddaughters.

The physical similarities between the two sisters are unmistakable as well. Barbara’s husband, Eddie, told her that Debi looks more like their mother than Barbara, and Ashley felt an instant connection with Debi.

“She sees her grandmother in me, and that warms my heart,” says Debi.

Their first meeting was filled with poignant moments as well. “Debi said, ‘Why was I not wanted?’ I told her, ‘My mother would have never parted with you,’” Barbara says.

In fact, Barbara says her mother had contacted the Georgia Adoption Registry to try to find her daughter. However, she was searching for Beverly Kay Perry, who was born on May 10, 1953, and Debi’s birth certificate said she was born May 8, 1953.

Debi believes divine intervention played a role in the reunion with her sister as well. “God’s design for me and Barbara is perfect,” she says. “His timing was exact. At that time, God said, ‘This girl needs her sister.’ I think Andy Drummond walked up to God and said, ‘Please help her.’” 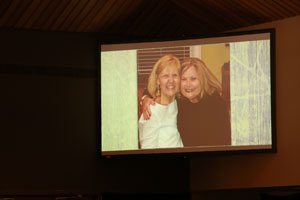 Parallel Lives
From the first night they met – when Debi was wearing black pants and a white shirt and Barbara was wearing white pants and a black top – the sisters realized how much they have in common. Talking late into the evening, they discovered many similarities in their parallel lives.

Both of them met their husbands when they were 15 years old and married at age 19. “Our husbands could have been brothers,” says Barbara. “They had the same mannerisms.”

Debi and her first cousin were in the same Sunday school class in North Augusta, and in 1985, Debi was a bridesmaid in a wedding where Barbara was a guest. They even discovered that they had flown on the same airplane several times through the years.

Both of them do freelance interior design work. And now, as a reminder of their story, each of them wears a dragonfly bracelet with birthstones from the months that Debi, Barbara, their mother and their children were born. 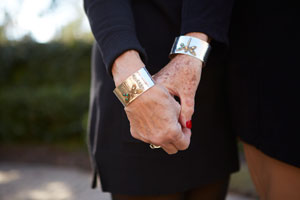 The dragonfly bracelet is meaningful to them because it plays a significant role in the novel Before We Were Yours by Lisa Wingate. The fiction-based-on-fact book recounts the actions of Georgia Tann, director of a Memphis-based adoption organization who kidnapped and sold more than 5,000 poor children to wealthy families all across the country from the mid-1920s until 1950. The book is set in 1939 Memphis and in present-day Aiken, South Carolina.

As for their true-life experience, the sisters believe that Debi may have been the only baby that was sold to a local family. “We grew up within a 10-mile radius of each other our whole lives,” Debi says.

Finding an Identity
Debi found out she had been adopted when she was about 3 years old, and she was told how fortunate she was to have been adopted.

“I was raised with a loving family in a loving home, but I struggled. I had questions, but I held it in because I didn’t want to hurt my parents’ feelings.”

Finally finding a blood relative has made a huge difference in Debi’s life. “With Barbara, I can look in her eyes and her big heart, and that has given me an identity,” says Debi.

Their reunion has answered many questions for Barbara as well.

“All through the years, my mother suffered emotionally, but we never knew why,” she says. “Now we know what happened to her.”

At the end of her life, Betty survived in a coma for seven weeks while she was in hospice care. “The hospice people said that never happens. They asked if there was anybody she had not said goodbye to,” says Barbara.

At the time, she knew of no one else that her mother needed to see. Now, though, she understands. “There was only one person left,” says Barbara. “It was Debi.”

Barbara, who was raised as an only child but found her sister at age 70, is relishing her new identity as well.

“It’s been a blessing for both of us, but especially for Debi. And I’m loving being in a sister role,” says Barbara. “What if our mother could see us now? We have to know that she does.