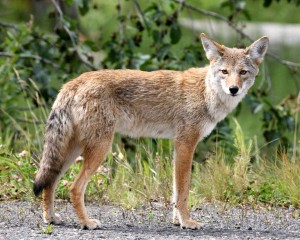 Wildlife and small pets are not always a good mix, and residents should take caution from recent coyote sightings in Columbia County.

Daniel Mayne, the county Animal Services operations manager, says the department has received a number of phone calls about coyote sightings from all across the county, primarily between Hereford Farm and Washington roads along Owens Road.

He says Animal Services also has gotten reports of coyote sightings in the Appling and Grovetown areas. Coyotes have been spotted in neighborhoods off of Furys Ferry Road such as West Lake and Wexford as well.

A West Lake resident lost her dog to a coyote, according to a West Lake Property Owners Association bulletin, and the neighborhood has set out traps for the animals.

“Coyotes are present the whole year, but we get more calls about them in the spring and summer. I think it’s because people are more active then,” says I.B. Parnell, senior wildlife biologist for the Georgia Department of Natural Resources.

Mayne and Parnell agree that coyotes pose little threat to human beings, but the animals are a danger to cats and small dogs.

“Coyotes don’t see people as a prey source, but they will attack small dogs and cats, especially cats,” Parnell says. “They might attack a small dog for food or as a threat to their territory. They won’t attack a person unless there is something wrong with them.”

Mayne cautions residents to be wary of a coyote that looks sick or lethargic because it could be a sign of rabies. He also advises residents to keep their pets’ rabies vaccinations up-to-date.

To discourage coyotes from coming into their yards, homeowners should keep garbage secured, refrain from putting out pet food for stray animals and eliminate water sources from their properties. Parnell also recommends that homeowners keep birdseed off of the ground because it attracts small mammals and rodents, which are a coyote’s main source of food.

“If you see a coyote in your yard, you can chase it off by spraying it with a water hose or by throwing a rock or a stick at it,” says Parnell. “Then the coyote won’t associate your yard as a safe place to be.”