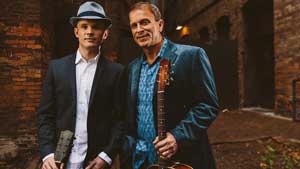 Influenced by jazz, bluegrass, western and popular music, the duo builds its guitar style on the thumb-picking techniques pioneered by guitar greats Merle Travis, Chet Atkins and Jerry Reed. Loren and Mark’s live performances feature guitar skills as well as musicality and the ability to be creative spontaneously. The interaction between the two musicians, who have toured extensively in the United States and in Europe, is as much a part of their show as their world-class guitar playing.