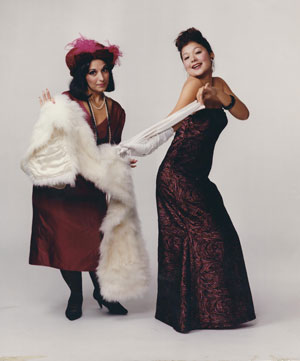 “When I was 8 years old, I turned our garage into a theater,” she says. “The garage door was the curtain.

Ballas, who was born in Hollywood, California but spent her formative years in Boston, used to ride her bicycle through her neighborhood to pass out fliers and invite friends to her performances. As the executive and artistic director for Augusta Players for the past 19 years, she no doubt has adopted more sophisticated marketing techniques. However, she is stepping down from her post at the end of the season, which concludes with a production of “Beauty and the Beast” in May. 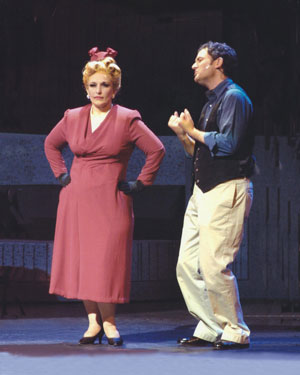 “We did things we never thought we could do. It’s been so fulfilling,” she says.

Timing is Everything
Ballas, who participated in theater during high school and college, first became involved with Augusta Players when she played the part of Mama Rose in “Gypsy” in 1992. In the mid-90s, she played Mary Magdalene in “Jesus Christ Superstar.”

In 1998 Augusta Players board members approached her about replacing the theater group’s longtime executive director. In addition to her theater background, Ballas, whose husband Chuck owns Luigi’s restaurant, knew what it took to run a business.

And not only could Ballas act. She could sing as well. (She met Chuck at age 20 when she was singing in a band on Miami Beach.) After she got married and moved to Augusta, she sang with a band called Vanilla in Georgia and the Southeast. “I sang Top 40 cover tunes for years, and when disco became popular, I started singing piano bar and jazz,” she says.

And timing certainly factored into her acceptance of the Augusta Players position as well. “I had raised three daughters, and the opportunity came at the perfect time in my life when I was ready to do something,” Ballas says.

Several years into her tenure, she also took on the role of artistic director. At the time she was hired, she says, “Augusta Players hired directors and paid them an honorarium.” When the economy faltered, she added directing duties to her administrative tasks. “To ensure the continuity and the quality of the Augusta Players, it was important to have one vision,” she says. 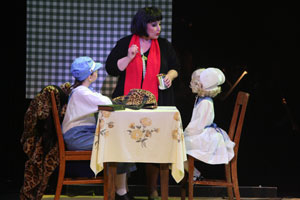 Ballas, who says her father and “The Judy Garland Show” inspired her love of theater, has difficulty trying to pinpoint moments in her career that stand out above all others.

“I can’t single out any one production,” she says. “Any time you have the opportunity to take something from its rawest stage and bring it to life, it’s magic.”

Augusta Players has done repeat performances of many productions, which Ballas says is typical of musical theater. However, she says, “Every time we do a production, it’s like doing it for the first time. It’s a living, breathing thing. Everyone who plays a role brings a little bit of themselves to it, so it’s never the same.

After a 19-year career as executive and artistic director of Augusta Players, Debi Ballas (third from left) will retire following a production of “Beauty and the Beast” this spring. She was celebrated in February at a gala concert, and is pictured with her daughters, (from left) Penelope Stewart, Claudia Latch and Bebe Kent. “The outpouring of love was overwhelming,” she says of the gala. “It was one of the most beautiful, special and memorable events of my life.” (Marian Lambert Yu photo)

Sharing a Vision
Ballas has enjoyed performing on stage as well as working behind the scenes, and she is grateful for the opportunity to inspire audiences and actors.

“I love to perform. I love to sing. I also love talent, and to be able to help performers showcase their own talent is special and meaningful,” she says. “It has been great to see young performers grow up in the theater and go on to have successful careers.”

Whether she is performing or directing, Ballas is well aware of the responsibilities of her role.

“When I’m performing, I’m worried about myself and my performance, and I feel the pressure of doing my best so I don’t disappoint the audience,” she says. “When I’m on the other side, I have more than myself to worry about. I’m responsible for making 20 or 30 people do their best. When you’re directing, you have to have a vision, and you have to help everyone share in that vision. When it comes together, it’s magical and exhilarating.”

Augusta Players showed its appreciation for Ballas in February with a gala concert to celebrate her career. The evening included performances by Augusta Players actors to highlight the shows that Ballas produced and footage of old performances that she thought had been lost.

“I’m not often speechless, but it definitely rendered me speechless. The performances were magnificent, and the outpouring of love was overwhelming,” says Ballas. “It was one of the most beautiful, special and memorable events of my life. I’m going to miss all of these wonderful people.”

Preheat oven to 425 degrees. Sift together flour, baking powder and sugar in bowl. Rub butter into mixture with your fingers until it resembles coarse crumbs. Make a well in center of dry mixture, then set aside. In another bowl, combine eggs and buttermilk; then fold all at once into dry mixture. Stir until moistened, then knead 4 or 5 times to create dough. Using your knuckles, create large pocket in center of dough, filling it with raspberries and white chocolate chips. Gently knead to combine. Use floured rolling pin to flatten dough to about 1 inch in height. Cut scones using 1 1/2-inch fluted pastry or cookie cutter, and place each cutout on large baking pan. Brush tops with egg glaze using pastry brush. Bake for 15 minutes until scones are light golden brown, turning pan around halfway through baking time to ensure evenness. Allow to cool, then drizzle melted white chocolate on scones. Serve with Easy Raspberry Freezer Jam (recipe below). Makes 12-15 scones.

Crush raspberries and stir in sugar. Refrigerate overnight, stirring occasionally. Add pectin and stir fruit mixture until fully incorporated. Pour jam into clean, sterilized glass jars or plastic containers. Allow jam to set for a day at room temperature before freezing for up to 1 year.

Popular in Ireland, a fruit fool is a creamy dessert that is made with poached fruit. The name probably comes from the French word “fouler,” which means to crush or squash.

If using fresh peaches, remove skins with sharp knife and remove stones, then combine peaches, sugar, and water in small saucepan. Cook on medium heat to gently poach for 8–10 minutes or until peaches are tender. Cool and then chill in refrigerator. When peaches are cool, add peach liqueur to mixture and purée in food processor. (If using canned peaches, drain syrup from can using a sieve then purée with peach-flavor liqueur.)

Beat whipping cream and sugar in electric mixer until it forms soft peaks. Soften mascarpone cheese by beating gently by hand then fold it into fresh cream, being careful not to over-beat mixture. Try to ensure a smooth, creamy texture. Gently combine about one third of purée, leaving swirls of peach purée. Spoon cream mixture into piping bag with large nozzle. Spoon 1 1/2 teaspoons of reserved purée into bottom of each glass and then pipe some cream into individual glasses. Place second layer of purée on top, followed by cream, then finish with a little more purée. Pipe final decorative swirl of cream on top. Refrigerate for at least 2 hours. Garnish with tiny sprig of mint. Makes 10 shots.

Peel and cut carrots into 1 1/2-inch chunks. Peel and cut potatoes into 1-inch chunks. Place carrots and potatoes in bowl of cold, salted water. Preheat oven to 350 degrees. Trim off any visible fat from lamb chops. Combine flour, salt and pepper in bowl and coat chops in flour mixture. Heat oil in large, ovenproof skillet and braise chops in small batches. When done, transfer meat to an ovenproof dish. Sauté onions, in same skillet used to braise lamb, for 3-4 minutes to soften and lightly caramelize. Transfer onion and half of potatoes on top of meat. Add 2 cups of water. Cover and bake for 1 1/2 hours. Add carrots and remaining potatoes. Simmer with dish covered for additional 30 minutes until vegetables are tender. To serve, remove bones from chops and stir meat and vegetables together. Place in individual bowls; garnish with sea salt, rosemary and chopped parsley. Drizzle with olive oil. Makes 4 servings. 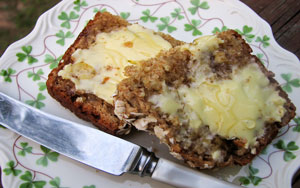 This brown soda bread is full of fiber, yeast-free and so simple to prepare. If you can find Irish imported brown whole wheat flour, you’ll get the best results.

Preheat oven to 425 degrees. Grease and flour three 8-by-4-by-2-inch loaf pans. Measure all dry ingredients in large bowl. Rub in butter with your fingertips and create a well in center of mix. Beat egg in small bowl and mix with buttermilk and honey. Add to dry ingredients and mix well with large spoon. Transfer dough to floured surface and knead gently with floured hands. Divide dough into loaves and place each loaf into a pan. Using knife, cut line down center of each loaf. Bake for 40 minutes to deep golden brown color, or until base of loaf sounds hollow when lightly tapped. Makes 3 loaves.

Preheat oven to 325 degrees. Cream butter and sugar together until light and fluffy with electric mixer. Measure flour, cornstarch and rice flour together, then slowly incorporate dry ingredients into creamed butter and sugar. Mix until fully incorporated. Place dough onto floured surface and use lightly floured rolling pin to roll out dough to 1/4-inch thickness. Cut into desired shape with cookie cutter and place on baking sheets. Bake for 12 minutes until edges of cookies are light golden brown. Sprinkle with sugar while still warm and cool in pan for about 5 minutes, then transfer to wire rack to cool completely. Store in an airtight container.