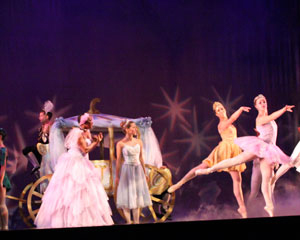 Columbia County Ballet will help the Imperial Theatre celebrate its 100th anniversary with a performance of “Cinderella.”

No one needs a fairy godmother to have a ball at Columbia County Ballet’s new, original production of “Cinderella,” at the Imperial Theatre.

This production, which features about 65 dancers ranging in age from 10 to 20, is choreographed by Columbia County Ballet alumnus Michael Viator.

“Michael has taken his trademark approach of presenting this classic story in a non-traditional way. He brings his main concentration to the power of the music, which is not the traditional Prokofiev, and the power of the movement he creates for the dancers,” says Ron Jones, Columbia County Ballet artistic director.

Jones and Renee Toole, Davidson Fine Arts Magnet School fine arts director, are weaving together the scenes to connect the details of the story. Lia Daniele, dance instructor at SAIL, is joining them to rehearse the dancers and prepare for curtain.

“We decided to bring a new story ballet each fall to the Imperial stage and donate the proceeds from ticket sales to the theater,” Jones says. “The ballet has thus far raised $29,000 on behalf of the Imperial, and with this final presentation to support the 100th, we are looking forward to adding to that figure.”

Augusta Symphony kicks off its 64th season this month with a theme of New Horizons, and the performance series will offer broad appeal for all ages.

“We are embracing the future at the Augusta Symphony,” says Dirk Meyer, music director. “We have a new hall, a new brand and look, a new music director – yours truly, and the orchestra is performing at an all-time artistic high.”

At the same time, the symphony is diversifying its audience, he says. “This upcoming season features several concerts that will certainly speak to our loyal patrons but, at the same time, appeal to newcomers to the symphony. Our opening performance, for example, features a world-class soloist and repertoire that is hugely popular. But it also features a new composition by American composer Michael Daugherty that revolves around the famous comic book hero, Superman.”

The Symphony Series, which includes six concerts at Miller Theater, will showcase the orchestra performing masterworks by some of the greatest composers from history through today. The first concert of this series and of the season, Obsession, featuring 23-year-old Canadian pianist Jan Lisiecki, will be Friday, September 28.

In addition to Daugherty’s Red Cape Tango, the concert will include Rachmaninoff’s Piano Concerto No. 2 and Berlioz’s Symphonie Fantastique. During the second half of the performance, audience members can download EnCue app to receive real-time program notes as the orchestra performs.

The Pops! Series, also at Miller Theater, will feature four concerts this season that include a tribute to the Eagles, a Holiday Spectacular, The Wizard of Oz and a performance by magician Michael Grandinetti. The orchestra will perform Harold Arlen’s musical score live during the screening of The Wizard of Oz.

This year Augusta Symphony also debuts its Family Concerts at Columbia County at Jabez S. Hardin Performing Arts Center. This series, which features the Holiday Spectacular in December and “Peter & the Wolf” in March, is ideal for introducing children to the symphony.

“These hour-long concerts are specifically designed for young concertgoers and will be fun for the entire family,” says Meyer.

The music director also is happy to be able to call the Miller Theater home. “The acoustics at the Miller are wonderful. Everyone on stage can hear each other, and that makes performing there a real pleasure,” he says.

Meyer believes it is crucial for Augusta Symphony to be an integral part of the community, and it needs to adapt to changing times to have success.

“We constantly need to evolve and keep up with new developments. To make orchestral music relevant to a large section of our community, we need to ensure that our performances have relevance to the people in Augusta. We hope to provide just that in the upcoming season,” says Meyer. “Augusta Symphony is embracing its past and its community and, at the same time, heads towards its future. A wider offering and more diverse programming are our first steps towards new artistic horizons.”