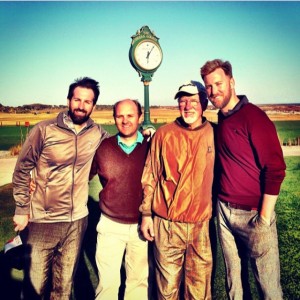 A trio of well-known brothers is joining forces with a local golf course, which was designed by the game’s Big Three – Jack Nicklaus, Arnold Palmer and Gary Player – to bring a golf tournament and concert fundraiser to Evans.

John, Josh and Charles Kelley are combining two of their favorite things – golf and music – to give back to the community where they grew up. The inaugural celebrity golf tournament will begin at Champions Retreat Golf Club at 10 a.m. Monday, October 27. Following the golf tournament, the Kelley brothers will join various musical guests on Josh Kelley Stage at Evans Towne Center Park’s Lady Antebellum Pavilion for a 7:30 p.m. concert.

Charles is a member of the award-winning country rock band, Lady Antebellum; Josh has released a number of albums that have appeared on the charts; and John has spent the last 15 years running a construction and development company in North Carolina. John and Josh played college golf while Charles is an avid golfer as well.

“We’re thrilled to be bringing this event to Augusta,” the brothers say. “This is our home, and we’re grateful to all the folks around here that helped each of us get to where we are today. We couldn’t be more excited to contribute to the community through this unique and exciting event.”

The brothers are launching this endeavor to cater to area golf fans and music lovers while donating the proceeds from both events to charity. Beneficiaries will include St. Jude Children’s Research Hospital and the John W. Kelley, M.D., Cardiovascular Endowment at the University Health Care Foundation. A number of Augusta-based charities will benefit from the fundraisers as well.

For more information about the golf tournament and concert, visit TheKelleyBrothers.com. 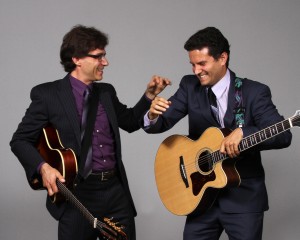 Get ready for jazz in overdrive. The Jabez S. Hardin Performing Arts Center will be filled with the sounds of steaming strings when acoustic guitarists Frank Vignola and Vinny Raniolo heat things up on Friday, September 5.

The two musicians mix original material with their own renditions of contemporary tunes to create a smoking hot blend of acoustic rock, gypsy jazz, bluegrass, swing and blues.

Vignola has been the guitarist of choice for many of the world’s top musicians including Ringo Starr, Madonna, Wynton Marsalis, the Boston Pops and the late guitar legend Les Paul, who named Vignola to his “Five Most Admired Guitar List” for the Wall Street Journal. Team him with Vinny Raniolo and you can expect a high-energy show that’ll keep your toes tapping. 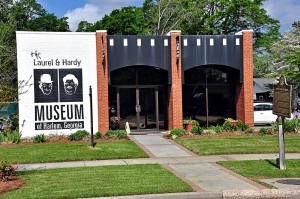 Any self-respecting Columbia County resident knows all about Harlem’s Oliver Hardy Festival, but how much do you know about the man himself?

Comedic actor Oliver Hardy, who formed one of the world’s most beloved comedy duos with British actor Stan Laurel, was born Norvell Hardy on January 18,1892, at his mother’s parent’s home in Harlem, Georgia.

Hardy’s father, Oliver senior, a Confederate veteran wounded at the Battle of Antietam, worked as a foreman for Georgia Southern Railroad and supervised the building of a rail line between Augusta and Madison, where he owned a hotel. He died less than a year after his son was born, and young Norvell was raised by his mother, Emily.

Hardy spent most of his youth in Milledgeville, where his mother managed the Baldwin Hotel, and the lively teenager worked as a projectionist and ticket taker in the local movie theater. He soon changed his name to Oliver Norvell Hardy (Norvell was his mother’s maiden name) as a tribute to his father and began pursuing his passion for singing and performing. The versatile showman studied music, performed vaudeville and worked in the fledgling film colony of Jacksonville, Florida. In his 20s he headed to Hollywood to try his luck in showbiz. The rest, as they say, is history.

If you go, be sure to visit Harlem’s Laurel and Hardy Museum in the former post office, where you’ll learn about Hardy’s youth, his rise to stardom and his illustrious — and lucky — pairing with his trusty sidekick. 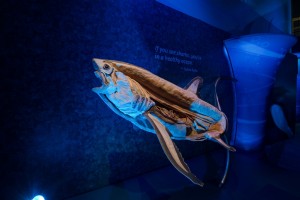 Some of the mysterious creatures of the sea have surfaced from the depths of the ocean at the Georgia Aquarium’s traveling exhibit, “Sea Monsters Revealed: Aquatic Bodies.”

The exhibit features more than 18 full-body sea creatures including a 6-foot-wide devil ray, a 15-foot-long mako shark and an 18-foot-long, 3,000-pound whale shark. Using a polymer preservation technique called plastination, the display animals give guests the opportunity to see the inside and outside of the sea creatures’ bodies. Called “sea monsters” by early oceanic explorers centuries ago, the aquatic life forms show how they were designed for the deep.

The largest exhibit in the world of plastinated sea creatures, the display also includes more than 150 individual organs and smaller animals that inhabit the ocean. In addition, living examples of many of the sea monsters, including the ray and the whale shark, can be found in the aquarium’s permanent habitats.

“The oceans are Earth’s last frontier. Scientists have explored only 5 percent of its mysteries, leaving the remaining 95 percent to the imagination. This exhibition takes visitors on a journey of exploration in search of animals once considered to be sea monsters,” says the exhibition’s creator John Zaller. “The creatures in this exhibition are so massive, so impressive, and so magical, that you truly have to experience it to grasp its impact and importance.” 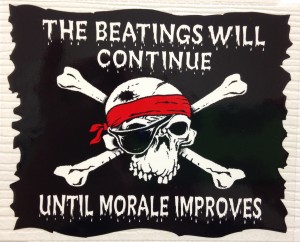 Do you feel out of place in that computer-filled office, stifled in that suburban neighborhood? Know you were really meant for a rollicking life of adventure on the high seas, lying in wait for schooners overloaded with booty? Your time has almost come, matey. Talk Like a Pirate Day (TLAPD for short) is just over the horizon.

The buccaneer holiday, celebrated on September 19, is the day that landlubbers everywhere can finally cut loose and let their inner scallywag shine. Expressions like Yo-ho-ho!, Sink Me! and Shiver Me Timbers! will be gliding off the lips of normally staid professionals, while the truly fanatical will be sprouting more obscure terms like Dance the Hempen Jig (to hang) and Splice the Main Brace (have a few drinks).

If you want to expand your Salty Dog lingo, books are numerous, including The Pirate Dictionary and Pirattitude (written by the two friends who invented TLAPD), which guarantees that you’ll be pirate-savvy faster than you can say Walk the Plank. Or just dip into their website, talklikeapirate.com. If you want to spice up your day but you’re not ready to go all out, try sprinkling your sentences with the occasional Ahoy, Arrr or Har-har-har. That should get the job done, me hearty.