Remove outer leaves and stems from Brussels sprouts. Preheat oven to 400 degrees. Bring a large pot of salted water to a boil. Add Brussels sprouts and cook until tender, about 8-10 minutes; drain and coarsely chop. Cook bacon until crisp; drain and crumble into large chunks. In a large bowl, lightly toss together the sprouts, red pepper flakes, salt and pepper and half of the bacon. Spray a 2-quart baking dish with non-stick cooking spray and add the sprout mixture, spreading evenly. Pour cream over mixture and sprinkle with cheese. Add breadcrumbs and remaining bacon (do not stir in). Cut butter into pieces and place over casserole. Bake about minutes until bubbly and golden brown. Makes 4-6 servings.

It’s time for one of the year’s favorite fundraising events. Fake It to Make It, a lip sync challenge to raise funds for SafeHomes Inc., will be held at 7:30 p.m. Friday, January 26 at the Miller Theater.

SafeHomes offers support to victims of domestic violence through advocacy, education and awareness. Founded in 1979, the organization affects the lives of more than 2,000 individuals and their families each year. Offering services for women, men and children, SafeHomes can house up to 24 individuals at one time in its emergency shelter. The nonprofit also provides outreach programs to nonresidential victims.

Other services include a 24-hour crisis hotline, legal advocacy, a support group, counseling and life skills classes. The organization serves a 10-county area including Columbia, Richmond, Lincoln and McDuffie counties.

“SafeHomes has truly filled a real need for over 30 years to many who have been unfortunately abused and that require confidential and caring help,” says Phil Alexander, CallingPost founder.

Seven contestants will vie for the Lip Sync Championship. Each contestant will prepare two performances to wow the audience and to work toward a fundraising goal of $10,000 for SafeHomes’ Domestic Violence Center. A championship belt will be awarded to the judges’ choice winner, and a second belt will go to the top fundraiser.

“Fake It to Make It has allowed SafeHomes to connect with the community in a unique way by engaging community members to participate in raising funds for our mission, as well as to do

something that is outside of their comfort zone and normal routine,” says Jennifer Frantom, development director.

Tickets for the show are $15, $30 or $50, and buyers can “credit” their ticket amount to one of the contestants at the time of purchase. For more information, visit safehomesdv.org.

A local high school fishing team is schooling its competition with its success.

Some people might think of fishing as a relaxing sport. Don’t tell that to the members of the Clarks Hill Youth Fishing Team, however. They thrive on competing against other high school fishing teams across the state.

The Clarks Hill team includes anglers from eight to 10 middle and high schools in areas including Columbia, Richmond and Burke counties, Lincolnton and Watkinsville. With one fifth grader on the team this year, their ages range from 10 to 18.

“The team will take any kids that are not affiliated with a school team,” says Christy Gonsalves, team mom and executive. “We’ll take them from as far away as they’re willing to drive.”

Anglers have to try out for the team, and they must demonstrate certain skill sets including casting skills, the ability to tie a palomar knot and a fisherman’s knot and the ability to use a trolling motor on a boat.

“We have a large group that loves fishing, and they’re really good at it,” says Gonsalves. “We’re in a great area for fishing.” 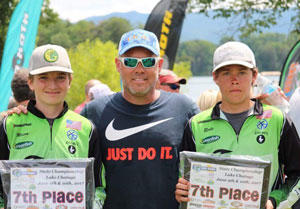 Team member Logan Plueger, 14, a ninth-grader at Grovetown High School, started fishing at Clarks Hill Lake with his grandmother when he was 2 years old.

“I like trying to figure out how I’m going to catch the fish,” says Plueger, who has been on the team for three years. “I try to look at the patterns that the fish are biting and the baits that they’re biting. Some of the fish are easier to catch than others. Bass are harder to catch.”

Seasoned Champions
The season, which started in mid-September, runs through June. Tournaments typically begin at first light on Saturdays, and weigh-ins are at 3 or 4 p.m. “They stay on the boat all day,” Gonsalves says. “The boys get to travel all over Georgia and see different lakes.”

Each vessel consists of two anglers and a boat captain, and 140-plus pairs of fishermen compete in each event. They fish for largemouth, smallmouth and spotted bass, and the competitions are strictly catch-and-release. 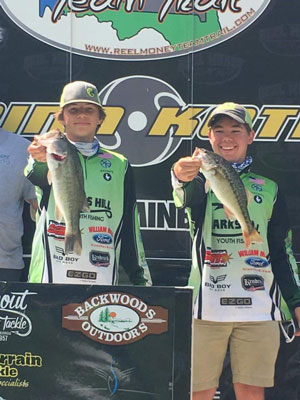 Members of the fishing club compete in local, regional and national tournaments, including the Border Bass at Clarks Hill Lake in December. The Clarks Hill team, which was started five years ago, has had success on all levels of competition.

In June Peace and Stephenson finished seventh in the BASS Nation High School Fishing Classic at Lake Chatuge in Hiawassee, Georgia. They also qualified for the Costa Bassmaster High School National Championship on Kentucky Lake in Paris, Tennessee later that month. In fact, the club has sent two anglers to nationals four times.

Giving Back
Through tournament fishing, high school students can earn college scholarships and learn sportsmanship. High school teams also are required to do a conservation project each year. Last year, the Clarks Hill team made a fish habitat out of piping and dropped it in Clarks Hill Lake just off the new dock at Wildwood Park.

“There is so much they can get out of it,” says Gonsalves. “They learn patience and determination. They develop an appreciation and respect for the sport of fishing. They’re not just a fishing team. They give back to the community.”

Clarks Hill team members volunteer at the spring and fall Fish for Life Foundation fishing rodeos and at the fall Paralyzed Veterans of America tournament. They also help with the annual Toys for Tots holiday campaign.

“They go to Walmart, and each angler grabs a buggy and goes shopping for Toys for Tots,” says Gonsalves. “They get so excited about buying toys for kids they will never meet.”

Plueger enjoys shopping for others. “I get to help people and see how that affects their everyday lives,” he says.