A Martinez brain surgeon publishes his second children’s book to encourage young people to share his passion for science and medicine.

Neurosurgeon Cargill H. Alleyne Jr. hopes that children will take a page from his book and get excited about human anatomy.

And Alleyne, professor and Marshall Allen Distinguished Chair of the Department of Neurosurgery at the Medical College of Georgia at Augusta University, is doing what he can to influence them. He recently published his second children’s book, “Bart’s Heart,” which is part of a series of children’s books that he is writing about the human body.

“I want to encourage young kids to think about science, and this is a fun, unique way to do it,” Alleyne says. “If you can lead them in the right direction, they may get turned onto something.”

“Bart’s Heart” follows his first book, “Ned’s Head,” which was published in 2012 and includes limericks that examine what’s inside a little boy’s head. The interactive books, geared toward 7- to 13-year-olds, include catchy rhymes, colorful illustrations and a glossary of definitions and pronunciations of medical terms associated with the heart and brain.

Colby Polonsky, a medical illustrator in the school’s Neurosurgery Department, included a small heart in each of her illustrations for Alleyne’s latest book. Michael Jensen, now an assistant professor in Augusta University’s Department of Medical Illustration, concealed small brains in each picture in “Ned’s Head.”

As the director of MCG’s neurosurgery residency program, Alleyne teaches young physicians to hone their skills and to become specialized in the field.

“Many of them are following in someone’s footsteps,” he says, “but if your parents aren’t in medicine or science, you may not be exposed to this.” 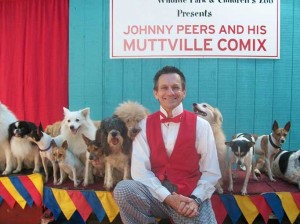 Dog lovers and Paul McCartney fans will have lots to bark about with Augusta Amusements’ performances this month.

A dozen-plus dogs will have their day on Friday, February 12 when Johnny Peers and the Muttville Comix perform. Peers, who has appeared in Ringling Brothers & Barnum and Bailey Circus and on “Late Show With David Letterman,” will lead his kennel of canines through challenging and funny tricks in the slapstick comedy act.

The Muttville Comix debuted in 1980, and Peers, a graduate of Ringling Brothers’ Clown College, performs with many dogs that have been rescued from shelters or pounds. The show stars pooches such as Daphne, the world’s only skating-boarding basset hound; Squeaky, a ladder-climbing fox terrier; Mr. Pepe, who responds only to commands in Spanish; and Sir Winston, a pointer mix who only answers to “Sir.” Tickets are $29.50 for adults and $12.50 for children 12 and under.

In addition to reveling in the antics of talented hounds, people can reminisce about the 1970s in a tribute to Paul McCartney.

On Friday, February 28, Dutch-born Yuri Pool will star in “The McCartney Years,” a note-for-note recreation of McCartney’s 1973 “Wings Over America” concert. Nothing is pre-recorded as every song is played live according to the standard set by Sir Paul himself in the early 1970s.

Pool is true to McCartney in his vocal styling and presentation on tracks such as “Live and Let Die,” “Let it Be,” “The Long and Winding Road” and “Jet.” Beatles promoter Sid Bernstein has praised the period-true, technically stunning, sonically explosive show as “the best on the scene today.” Tickets are $45.

Both performances begin at 7:30 p.m. at the Jabez S. Hardin Performing Arts Center in Evans. Reserved seats can be purchased online at www.augustaamusements.com or by calling (706) 726-0366.

Cut bacon into short slices and place in freezer about 15 minutes. Preheat oven to 350 degrees and bring a pot of salted water to boil. Slice potatoes and add to the boiling water; boil about 4 minutes. Remove, let cool, then pat dry. Melt butter and rub on the potatoes. Season with salt and pepper, to taste. Thread potatoes and bacon onto greased skewers and bake about 60 minutes or until the outsides are browned and crisp. Season with additional salt and pepper, if desired, and garnish with paprika. Makes 4 servings.