At Champion Orthopedics, we understand how important it is for our patients to get the best comprehensive and advanced treatment for their injury or condition so they can get back to enjoying an active lifestyle. From sports medicine to total joint replacement, Champion Orthopedics is a full services specialty clinic with some of the most highly trained physicians in the CSRA with a team approach to complex orthopedics care. We offer expertise in diagnosis, treatment and rehabilitation for all orthopedic injuries and musculoskeletal disorders. Care is stronger and more successful by bringing all of our orthopedic services under one roof:
• Board certified and fellowship trained physician evaluations and treatment
• Diagnostics and imaging, including onsite MRI
• Surgical specialties including spine and advanced technology robotic assisted and anterior  approach joint replacements
• Rehabilitation with Physical Therapists and Certified Athletic Trainers 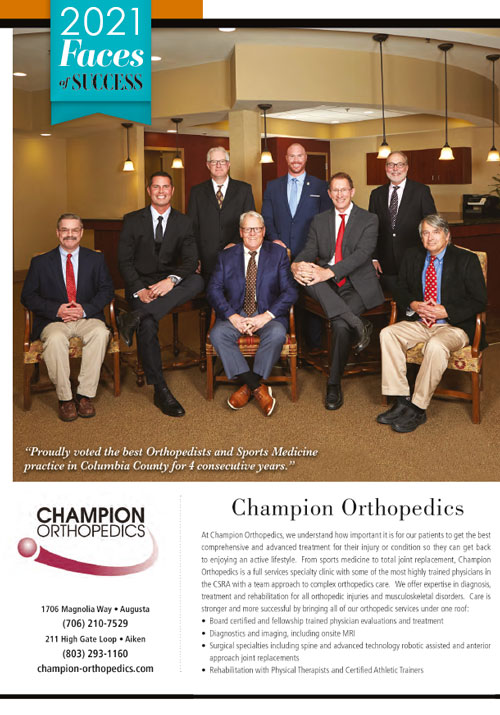 Jordan Trotter Commercial Real Estate was founded in 2013 on the basic principles of integrity and building relationships with each client, be it local, national, or even international. The Jordan Trotter Team has proven to the CSRA as well as the entire Southeast that taking risks can be the impetus for growth and a better community. Our experience across all types of commercial real estate transactions goes hand in hand with the relationships we cultivate.  Our focus is on the client, ensuring outstanding service and successful completion of each project whether brokerage, management, or development. Our firm provides services to our growing market as a full service commercial real estate firm that is devoted 100% to commercial real estate. 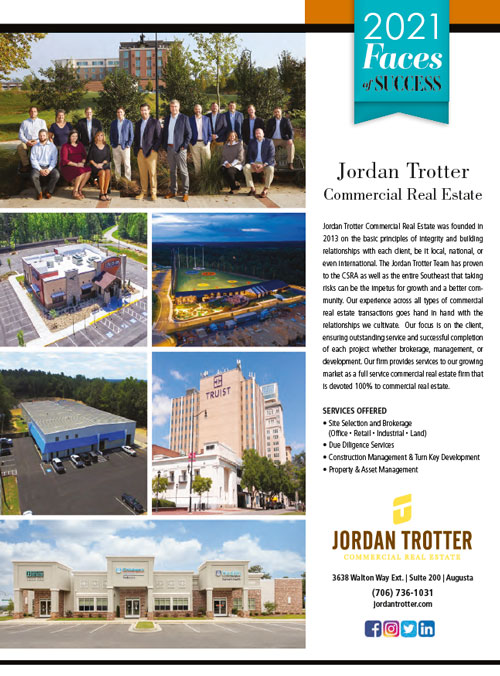 Founded in 2009, Kruhu is a national award-winning design and marketing studio that partners with all types of brands, from local startups to worldwide organizations. Their mission, to hold themselves and others accountable as “contagious in spirit and courageous in nature,” drives Kruhu to successfully craft effective plans for core brand creation, management and refinement. Some of their talents include graphic design, website and interactive development, performance marketing, videography, and photography. Kruhu understands that your brand is unique, and in order to stand out in your industry, the approach has to be custom and intentional. With a reputation built on quality and a diverse set of talents paired with steadfast communication, Kruhu operates at the highest standard to consistently deliver the best experience. The Kru firmly believes your dreams are worth the fight, and they take the gloves off. For a ringside view of their work, visit kruhu.com.

At Rick’s Paint and Body, collision repair is a family affair. And owners Katie and Tyler Smith, who purchased the shop from Katie’s father in January 2020, are proud to carry on the tradition. Katie’s dad, Rusty Campbell, is still here – he just gets a little more fishing time.

“Rick’s is a local, family-owned and operated business,” says Tyler. “We put a lot of effort into training our employees and providing the equipment to repair vehicles to high certification standards.”

As a Gold Class shop, all of Rick’s technicians have achieved a required level of rigorous annual training through I-CAR and can repair any type of vehicle.

“Our certifications help set us apart from other body shops,” Katie says. “We are certified by manufacturers such as Ford, Ford Aluminum, GM, Fiat, Chrysler, Dodge, Kia, Hyundai, Nissan, Infiniti, Subaru, Honda, and Acura.”Katie is looking forward to her shop receiving ongoing certifications and is even considering offering customers Certified Repairs.

“Any time you can give someone a piece of paper that says ‘Certified’ I feel like it makes them feel good… as they know they made the right choice.” 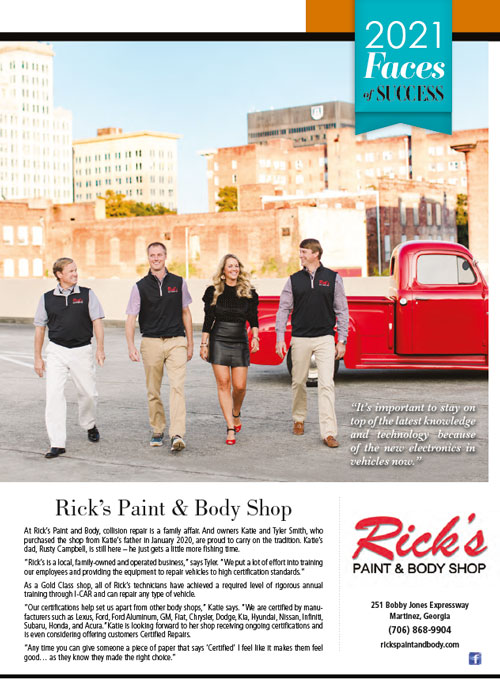 Pam Lightsey has been surrounded by real estate for 40 years. Her past business experience helped her launch her real estate career as well.

“The Rotary motto of ‘Service Above Self’ helps me through challenging transactions, and the relationships that you make in life help you in any role,” says Pam. “I’m so very thankful for my clients’ trust to help them whether they are buying, selling or leasing real estate. I will be there from the beginning to the closing table with every client.”

The best hair salon and spa is what you’ll discover at D.J. & Co. Salon, Spa & Gifts Inc. 12,000 clients and counting think so, come in and see for yourself. We employ the best educated stylist and spa team in the C.S.R.A. Our mission statement is simple: “Provide our guests with the finest service backed by the best education time after time.”Consistency in providing the best service available is in part why we’ve been one of Augusta’s top salons since 1992. In fact, we’ve been named Best Hair Salon 9 years in a row.  Come experience our experience and you’ll become a regular client, we guarantee it.  We thank you and look forward to servicing you and your referrals.

For Nancy Powell, Realtor-Broker and CEO of Powell & Associates, Inc. real estate is all about listening. And she’s been following that guiding principle successfully for more than 20 years.

“Listening to a client’s needs is paramount,” Nancy says. “No two clients are the same, and I believe in personalizing and customizing each experience. Sure, there are processes I follow, but they aren’t cookie-cutter for everyone.”

In a state-of-the-art facility, the Evans Medical Group team provides experienced and devoted care from seven doctors, physician assistants and nurse practitioner. Residents of the CSRA have known and trusted Evans Medical Group for more than 30 years. The medical team members look forward to seeing and serving both new and returning patients.

For more than 40 years, the community has trusted A&D Carpet and Hardwoods for flooring. The family business, founded by Angela and David Key, includes daughters Becky Critell, operations manager, and Davina Key-Strickland, sales/marketing manager and decorator.

Now clients also can trust A&D to help them buy or sell a home through A&D Properties.

After becoming an empty nester in 2016, Becky began buying and flipping houses. As a natural outgrowth of this venture, she got her real estate license and formed A&D Properties with Angela in 2019.

“I have been doing design work and home remodels since 1998. I know what to do to sell a house,” Becky says. “I can help my clients envision removing themselves from their homes and help potential buyers see themselves in that home.” She is a licensed Realtor in the local area in Georgia and South Carolina and part of the Savanah and Tybee Island Multiple Listing Service.

From new flooring to buying or selling a home, if you’re looking for success, the key is A&D.

Dr. Wheatley and her staff at Greenbrier Veterinary Services understand that fur babies are family. With a new, larger, state-of-the-art veterinary hospital, they nurture the human-animal bond with comprehensive, compassionate, professional pet care. Services include:

Real expertise. Real service. Real results. Augusta native Gardelle Lewis of
Meybohm Real Estate has a reputation for results. He began his career in 1983 by being named the company’s “Rookie of the Year.” He has continued to win
numerous Meybohm awards including top agent in annual sales, repeated selling and listing agent of the month awards and top customer service score results.

Consistently one of the top performers in the local market for 38 years, Gardelle has been listed in the top 1% of Realtors nationwide. He was featured in a Smart
Money magazine story that highlighted the achievements of four Realtors in the country, and he has been named Best Real Estate Agent by Columbia County
Magazine readers multiple years. He is a Certified Residential Specialist, Seller
Representative Specialist, Military Relocation Professional and Certified Negotiation Expert.

Gardelle cares about his clients, and they know they can trust him with their biggest investment – their home. 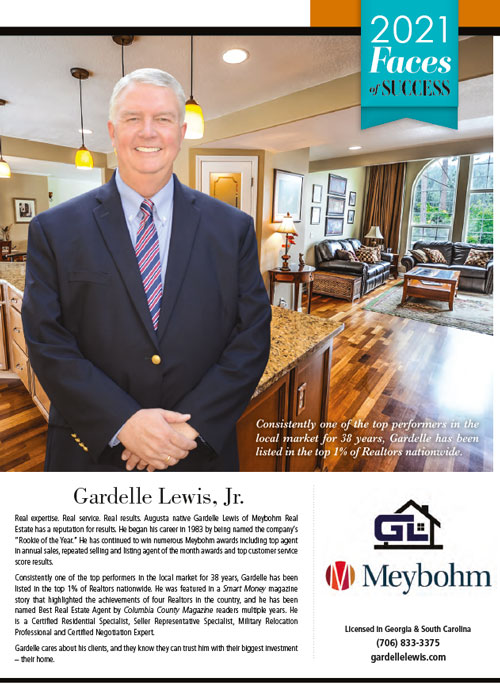 Reaching the right audience can be a challenge for any business. However, the marketing experts at Allegra make it easier for you to find success.

For nearly 40 years, owners Rosemary and Larry Lynn and their staff have provided turnkey solutions for customers, from print, design and marketing services to specialty items, branding and signage. 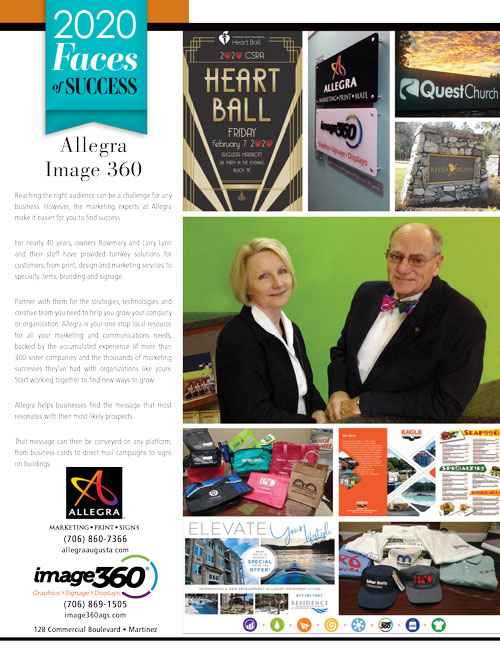 Ten years ago, Augusta native Amy Faircloth, RN, BSN, created Aesthetic Essentials of Augusta to help patients look and feel their best. With 20 years of experience in perioperative nursing, as well as ENT, ER, med-surg and pediatrics, it was a natural fit.

Today, with locations in Augusta and Atlanta, Aesthetic Essentials has become the “feel good” spot for patients all across the U.S. and beyond.

“People come from all over to feel and look better,” Amy says. “They come from as far away as South America, New York and California. They become part of our wellness family and know us on a very personal level. We cater to their specific needs, and when they leave with tears of happiness or looking and feeling better than when they came in, we are doing exactly what we are meant to do.” 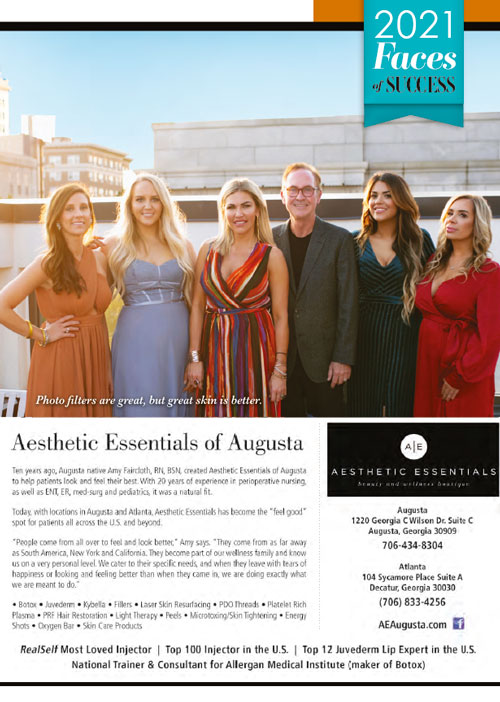 To no one’s surprise, the population in Columbia County just keeps on growing. After all, the county’s economic vitality and quality of life are selling points to new residents.

“The commissioners rolled back taxes again this year,” he says. “We’re getting to be one of the lower tax communities in the state.”

Of course, these new residents – along with existing residents – need places to live and work, and residential and commercial construction is keeping pace with the population growth. 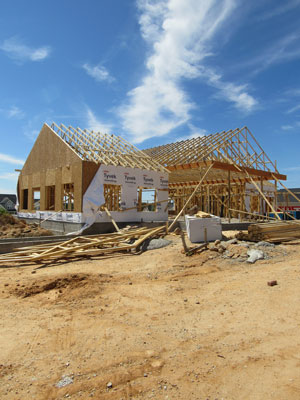 “The economy hasn’t done too much to slow us down,” says Sterling. “As with everything, the supply chain is slowing us down. For the most part, we’ve done as well as anybody has to keep going.”

Debra Moore, the city manager, says people like Harlem’s hometown atmosphere. “Everybody knows everybody,” she says. “It’s just like one big family.”

From August 1, 2019 to August 15, 2020, Grovetown issued 198 permits for new single-family residential homes and 81 permits for new multi-family townhouses and apartments. The city did not issue any permits for new commercial construction during that time frame.

Ronald Kurtz, the Grovetown director of Planning and Community Development, believes the city, which has seen a population increase of about 50% in the last 10 years, has a lot to offer to its residents.

“First and foremost, Grovetown is a warm, welcoming community,” says Kurtz, who started his position August 2 after moving to the area from suburban Atlanta. “It’s a community that is well-located to a lot of things.”

He says Fort Gordon and the Cyber Command Center, as well as the school system, are driving growth to the area. 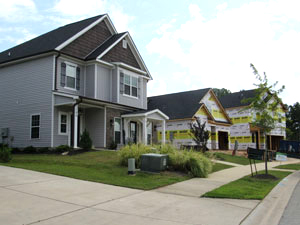 “It is not as overloaded as the metro Atlanta area,” he adds. “We have an opportunity here to handle a lot of the expected growth in a responsible way.”

To balance the needs of longtime and new residents, he says, “We need to maintain positive lines of communication, provide a high-quality level of service at the city and do the best we can with the resources we have.”

The city is trying “to encourage a live, work, play environment” with its planned use development.

“We need to provide the proper infrastructure and handle growth in a controlled and calculated manner rather than figure it out afterward,” says Kurtz. “We are well-prepared to tackle that. Everyone in the city is excited to have these challenges, and we’re energized by them. We’re ready for it, and we’re looking forward to what lies ahead.”