The cultural scene in Columbia County is always a cause for celebration, but the new Yuchikiokee Festival will specifically highlight the county’s art, music, dance and heritage.

But where in the world did the name come from? Although it may be a bit tricky to pronounce at first, the festival name comes from two Native American tribes, the Yuchis (also spelled Ugee, Uchee or Euchee) and the Kiokees, which once made a home here. Two local creeks that wind through the county and join into the Savannah River also have been named for the tribes — Euchee and Kiokee creeks.

The two-day festival will get underway Saturday, March 21 with live entertainment at 11 a.m. and an opening ceremony at noon. A 7 p.m. concert will round out the first day of activities. In between, the event will include plenty of entertainment with vendors and artisans from the Southeast, a sidewalk chalk competition, performances by Columbia County arts organizations, zorbing, light painting and a juried fine art competition.

Live performances from Journey Church will kick off the festivities on Sunday, March 22 at 10 a.m., and the festival will close with excerpts from Columbia County Ballet’s Roar of Love beginning at 5 p.m.

A variety of food vendors will be on hand as well, so no one will go hungry. 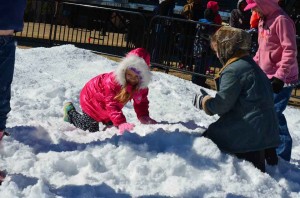 Forget about last year’s ice storm. It can be fun to play in the snow. So, grab your mittens and head to Evans Towne Center Park on January 17 to create wintertime memories at the third annual Columbia County Snowfest.

This year’s event will include three snow-tubing slides – two King of the Hill slides and a new Junior Snow slide. However, snow bunnies aren’t the only ones who can enjoy the festivities. Additional entertainment will include carnival rides, live music, arts and crafts, kid zone with inflatables, concessions and more.

Last year Russell made it four days into his New Year’s resolution. So what if I made it for him — or, strongly suggested it. (My own New Year’s resolution was a really simple one: just try, once again, to keep my resolutions from the year before, because they’re always the same and I never keep them — get organized, lose weight, eat healthy, be a better person, yada, yada).

He had been getting on my nerves with all of his pessimism in 2013, so I said, “Russell, I have an idea for your New Year’s resolution. My mother always said if you can’t say something positive, then don’t say anything at all.” He answered with, “Sure is going to be a quiet year.” This struck me as funny as all get out.

At first I thought there was no way he could possibly keep that promise. But every time he started to complain, whine or lament, he corrected himself.

If he said something negative, he turned it into a positive. “Daggone, I won’t get to play golf Saturday. It’s going to be freezing. But, at least I get to sleep in.” Good point — but, really? Did he say that?

The next day he said, “The light in my car says ‘Check engine.’ That’s OK, I always enjoy chatting with Randy at the auto shop.” I thought I was hearing things.

I was starting to get worried. This was not my husband. It couldn’t be. Resolution or not, he’d never acted this way continuously — cheerful, positive, hopeful — in all the years of our marriage. But on the fourth day, it did get old and he cracked.

As you know, the humongous post-Christmas sales were just fabulous. If I had one e-mail that said 75 percent off, I had two dozen. The newspapers were stuffed with sales inserts and the TV was blaring 24/7 with other sales. One place even had 90 percent off.

Well, there’s only one thing I like better than a good shoe sale and that’s a good post-Christmas sale, so I went a little bonkers and bought lots of good stuff. I mean, when you see $15 red candles for $3 that are only one aisle over from the almost-identical Valentine red candles, brand new, at $15 or more, it’s hard not to go a little bonkers.

But the candles, potpourri, soap, notepads and ornaments aren’t what spun Russell into a nosedive with a “no-way-on-this-positive-thing-another-minute” downward spiral. It was the gorgeous wreath that I found, marked down from $39.95 to $11 (including tax) that I thought I’d hidden in the trunk, but he found.

Still, it was gorgeous. Lush green, silky, totally realistic-looking with huge red shiny apples and tightly formed, perfect pinecones. And I didn’t own one even close to that magnificent. Plus, at $11 it wasn’t going to break the bank.

But it wasn’t the money that bugged him. It was more of a space issue. Remember one of my perpetual resolutions — to get organized? OK, now you see the problem.

So this year we’ve made a pact: I’m stuck with Russell’s negativity and he’s stuck with my wreath collection (nine or 10, but who’s counting?) and my sales shopping. Our joint New Year’s resolution is to simply live and let live.

As soon as he recovers from my after-Christmas shopping this year and starts speaking to me again, I’m going to tell him. 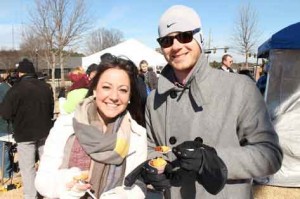 Anything goes in the fourth annual Chilly Chili Cook-Off sponsored by Champions Made From Adversity this year. Contestants, who can compete as individuals or as businesses, are free to throw in everything but the kitchen sink when they compete for prizes in the chili contest. Contestants also can win people’s choice awards and showmanship prizes for the best-decorated booths.

This year competitors also can enter their favorite recipes in two new categories – Soups and Stews as well as Cornbread. In addition, local vendors will be on hand to sell goods such as coffee, hot chocolate and desserts.

“We’ll have something for everyone,” says CMFA’s Kelly Garcia.

Patrons can sample chili, soups, stews and cornbread to select the people’s choice winners. They can cast their votes by placing money in a provided jar. Contestants also are encouraged to rally financial support prior to the cook-off or come up with other creative ways to raise funds. Competitors should bring at least 5 gallons of chili, soup or stew and 200 1-inch pieces (about two 13-by-9-inch pans) of cornbread.

Entertainment will include a warrior art exhibition, a wheelchair basketball expo, a free throw contest for adults and children, a performance by Center Stage Dance Academy, raffles and a selfie photo contest.

“We want to raise awareness about disabilities,” Garcia says. “People with disabilities do everything you do. They just have to do it in a different way.” 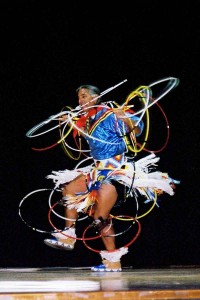 Known for its dramatic and visually compelling performances of Native American culture, the Kevin Locke Dance Ensemble will visit the area as part of Georgia Regents University’s Lyceum Series this month.

Locke (his Lakota name, Tokaheya Inajin, means “The First to Arise”) is known worldwide as a visionary hoop dancer. He also is a preeminent player of the indigenous Northern Plains flute, traditional storyteller, cultural ambassador, recording artist and educator. 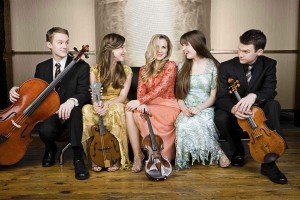 The family that plays together stays together. Just ask members of the Annie Moses Band, who have performed together on stages ranging from Carnegie Hall to the Grand Ole Opry.