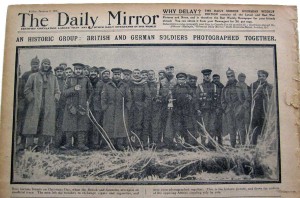 On January 8, 1915, the Daily Mirror published a group photo under the headline “An Historic Group.” As the caption states, “Foes became friends on Christmas Day.” (Courtesy raglinen.com)

Peace and goodwill toward men interrupted WWI a century ago.

Myths and legends frequently grow out of the heat of battle, but one seemingly unbelievable event – the Christmas truce of 1914 – actually took place 100 years ago on the battlefields of Flanders during World War I.

The truce began when German soldiers spontaneously started singing carols and lining their trenches with Christmas trees they had received from home and lighted with candles. Curious, but skeptical, Allied troops, who had been bombarded with propaganda depicting Germans as barbarians, joined in the singing.

Following the age-old custom of truces, soldiers from both sides arranged ceasefires and ventured out to No Man’s Land between the trenches to gather and bury their dead. They ultimately began to communicate, sharing photographs and exchanging gifts such as cake, alcohol, postcards and tobacco.

Remarkably, the 1914 Christmas truce of World War I resulted from no official act but started on each battlefront spontaneously and independently.

The ceasefire started in some places on Christmas Eve and in other spots on Christmas Day. In most areas the truce lasted only a day, but along other lines it continued until December 26 or New Year’s Day. The truce covered as much as two-thirds of the British-German front while French and Belgians were involved as well.

The desire to acknowledge the holiday has been attributed to several theories. At that time the war was less than six months old, and animosity between the troops had not yet escalated to the level it would reach later in the war. Soldiers shared a common bond of discomfort in the early trenches that lacked amenities and were prone to flooding. And other than the newly dug trenches, the surrounding landscape of fields and villages still appeared relatively normal. 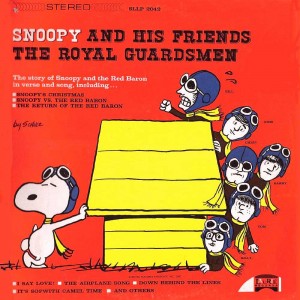 The extraordinary event has inspired theater productions and songs, including Snoopy’s Christmas, the 1967 Royal Guardsmen top hit about Snoopy’s uplifting Christmas encounter with the Red Baron.

The extraordinary event has inspired theater productions and songs, including Snoopy’s Christmas, the 1967 Royal Guardsmen top hit about Snoopy’s uplifting Christmas encounter with the Red Baron. However, a number of misconceptions about the truce also gained traction over time.

One widely held assumption is that only enlisted men took part in the truce, but some officers also participated with varying degrees of support.

According to another misconception, news of the truce was withheld from the general public at home until the war was over. Yet, throughout January 1915, British newspapers printed letter after letter from soldiers who were part of it and ran photos of British and German troops together in No Man’s Land. Germany also publicized the event on a smaller scale for a shorter time.

The truce led others to believe that neither side wished to return to war, but most soldiers were determined to resume the fight and win.

Many of the WWI soldiers involved thought the Christmas truce was a one-of-a-kind wartime event, but informal truces were a longstanding military tradition. During the Civil War, Rebel and Union soldiers traded goods, fished on opposite sides of a stream and even gathered blackberries together. British, French and Russian troops gathered around the same fires to smoke and drink in the Crimean War.

The story of the 1914 truce was largely forgotten in the fighting that followed, and the Christmas truce had no long-lasting effect on the war that dragged on for four more years. For a brief time, however, the reciprocal gesture fostered peace and goodwill among warring adversaries who, they discovered on that day long ago, were more alike than different. 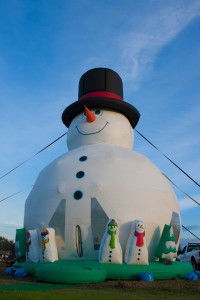 Bouncy, the world’s tallest snowman, will make an appearance at Christmas in the Park

One of Columbia County’s most popular gathering spots will look like a winter wonderland when Christmas in the Park comes to Evans Towne Center Park from 10 a.m. until 4 p.m. Saturday, December 6.

The event will feature arts and crafts vendors for holiday shopping; ice skating; the world’s largest inflatable snowman, Snowzilla Jr.; a tube slide; a trackless train; trolley rides and Santa and Mrs. Claus. A live nativity scene will be on site from 2 p.m. until 4 p.m., and musical performers will include Tara Scheyer and the Mudpuppies with Snapdragon, Eryn Eubanks and the Family Fold, jazz saxophonist Fred Williams and more.

Admission is $8 in advance or $10 the day of the event. Tickets are available online at etix.com or at the Community & Leisure Services office, 630 Ronald Reagan Drive, Building C; Chili’s in Evans or Learning Express Toys.

A tree lighting, which is free, will follow the festival at 5 p.m. For more information, visit evanstownecenterpark.com or call (706) 650-5005. 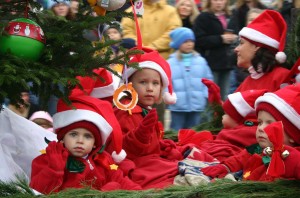 There’s no place like home for the holidays, and Columbia County will offer local residents plenty to do to get in the Christmas spirit. With tree lightings, parades and festivals in the lineup of holiday events, everyone is sure to have a wonderful Christmastime. See our events calendar for more details.